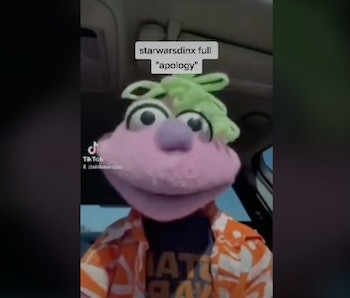 Social media has always anonymized those who use it, allowing fans to debate anything and everything without putting an ounce of their real-life under scrutiny. But now that TikTok and other video-centric networks reign supreme, some fans are looking to go one step further to distance themselves. That’s how Star Wars Dinx came to be.

But just who is Star Wars Dinx, and why are they being accused of homophobia? The answer is an odd but important lesson in social media etiquette.

Who is Star Wars Dinx?

Star Wars Dinx was a TikTok account that focused on Star Wars lore. The happy purple puppet with a mop of green hair wore different Star Wars outfits as he explained the nuances of Gray Jedi, the power of the Darksaber, and his opinions on the minutia of the Star Wars universe in a soft-spoken voice. He answered questions, cracked jokes, and generally seemed like a wholesome presence on your TikTok feed.

However, in July 2022, another TikTok user discovered the Facebook page of the man behind Dinx, which was littered with articles claiming the 2020 election was illegitimate, that legalizing gay marriage was a mistake, and that vaccine mandates were unnecessary.

According to TikTok user yermomgey, who chronicled the event, Dinx sicced his followers on the account that revealed this information in response, getting both it and him banned from the platform.

In the video that led to his banning, Dinx explains that he did post on Facebook about Disney “using the homosexual agenda to get more money,” but argued that his beliefs don’t affect his TikTok presence.

While Disney and other corporations aren’t above reproach for tokenizing LGBT+ people and issues, the “homosexual agenda” is a baseless conspiracy theory rooted in homophobia.

In response to Dinx’s video, other TikTok puppets are speaking out to distance themselves from Dinx. Magic: The Gathering puppet Sullivan The Monster, for example, invited fans to hit him with a baseball bat if he ever uses the term “homosexual agenda.”

Bryan Barry, who co-hosts a podcast focused on the LGBTQ+ elements of Star Wars called Pink Milk, notes that the biggest problem with Dinx is that he still seems to be holding onto those beliefs. However, that doesn’t excuse some of the alleged responses.

“If people are going after [Dinx’s] family, then that’s not okay,” Barry tells Inverse. “But he’s not denying his anti-gay logic. If he has a problem with gay people, he should own up to it. I try to allow people to change, but it doesn’t sound like he’s any different.”

The Inverse analysis — While some fans argue that personal beliefs shouldn’t affect Star Wars opinions, the Star Wars universe exists in our universe. Personal belief can influence fan opinions, as seen in the racist backlash Kelly Marie Tran faced for her role in The Last Jedi, or the negative feedback the LGBTQ+ representation in The Rise of Skywalker received. (In the video above, Dinx even begins to argue that the hatred for Tran’s character was caused by Disney forcing her onto fans, rather than unvarnished racism and sexism.)

Puppets may be a great way for the camera shy to share their views, but Dinx’s thoughts came from the man behind him, and those thoughts were apparently influenced by homophobia. This doesn’t mean every puppet on TikTok needs to get the third degree, but it’s important to be mindful of the motivations behind the Star Wars opinions we consume on a daily basis.