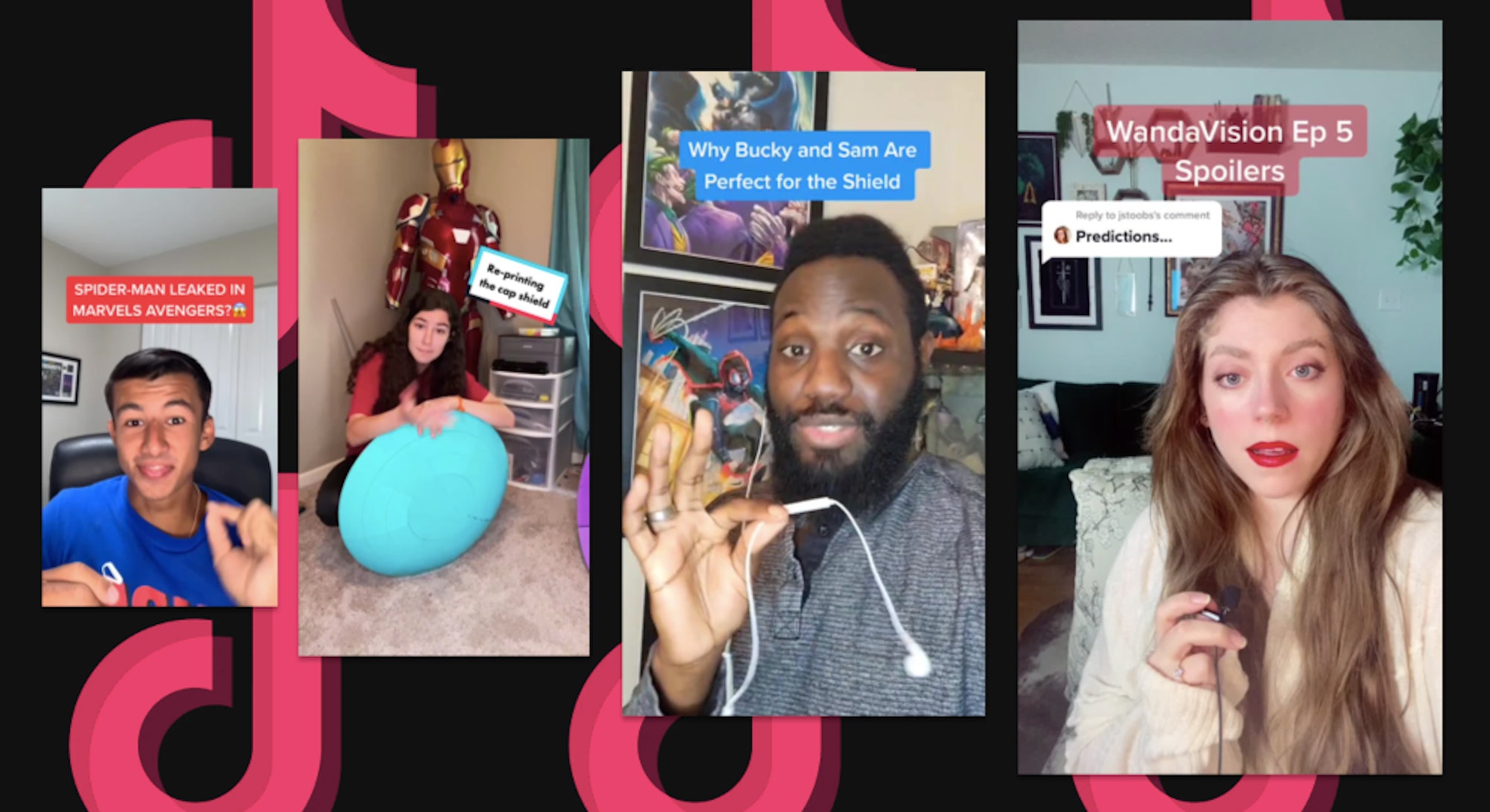 In 2019, Matthew Ramos was publishing videos about superhero shows and movies to his YouTube channel, Supes. Then, he discovered TikTok.

“At the time, no one was talking about Marvel or anything related to the world of superheroes [on TikTok],” Ramos tells Inverse.

“I knew TikTok would evolve into something so much bigger,” he adds, “so I started to share my passion for Marvel on that platform in hopes of connecting with other passionate fans.”

Ramos isn’t alone. There’s a thriving TikTok community of Marvel fans trading theories, jokes, and cosplay. The Marvel hashtag on TikTok has over 48.1 billion views as of writing. Inverse spoke to some of the biggest names in this community and one thing is clear: MarvelTok is here to stay.

Superheroes aside, TikTok had a huge year, director of content Lizzy Hale tells Inverse. The service saw 75% growth in users during the Covid-19 pandemic with one in six Americans regularly using the platform each week. “The magic of TikTok is that there is a community for everyone, no matter your interest,” Hale says, “from book lovers to Marvel fans to Plant-Tok.”

But MarvelTok, in particular, was perfectly positioned to explode over the last 12 months for one simple reason: Marvel fans needed new content, and TikTok suddenly became the best place to get it.

TikTok went mainstream at the perfect time for Marvel fans. After a global pandemic caused movie studios to delay their biggest releases, fans turned to the social network for a distraction from the bleakness of the news and the boredom of quarantine.

“The timing of TikTok's success couldn't have been more pivotal to Marvel fans because it became a huge source of entertainment over the pandemic,” Ramos says. “With Marvel not being able to produce content, the fans grew hungry, and TikTok became a platform for fans to satisfy their hunger.”

As Marvel fans revisited a decade’s worth of movies on Disney+ and analyzed them on TikTok, they also patiently awaited for new stories in the MCU. In January 2021, Marvel finally answered their prayers with WandaVision, followed soon afterward by The Falcon and the Winter Soldier.

“You’ve seen the Avengers: Endgame theater reaction videos,” Green tells Inverse. “It’s just something that binds the fandom together. So during the pandemic, where you can't see your friends, waiting for an episode of the latest Marvel Disney+ to drop at midnight or 3 a.m. gives us that same feeling we had when we were at the theatre. It's happening live. And for 30 minutes to an hour, it feels like we aren't in a pandemic anymore.”

Not only has MarvelTok provided much-needed escapism, but it’s also forged a community for comic-book fans to share their overwhelming excitement for the latest additions to the cinematic universe.

Megan Stuberg (@jstoobs) was inspired to dip her toe into the “nerdy side” of MarvelTok. She is known for her love for Nebula in Guardians of the Galaxy and championing (often underdeveloped) female characters as much as the beloved heroes.

“Finding a community like this has been such a gift,” Stuberg says. “It was my first time finding a nerd community that had so many prominent voices from so many different backgrounds and experiences. The moments I treasure most are getting messages and comments from young girls telling me my videos make them feel more confident in a space that had previously felt really exclusionary. What more could I ask for than that?”

Yarid fell in love with Marvel after watching Avengers in 2012 and began building Iron Man suits out of foam at fourteen years old. After dabbling with 3D printing and completing her engineering degree, she finally “gave in and downloaded TikTok” during lockdown.

“Obviously if I go around telling people, ‘I build Iron Man suits,’ they're probably going to look at me like I'm crazy,” she says, “So it's been incredibly fun to get to present the hobby in a fun way.”

The “die-hard Marvel fans” reactions to Yarid’s detailed movie replicas are “overwhelming encouraging.” She said: “I think Marvel itself does a great job of making their fans feel like they're a part of something. Everyone can bond over a funny quote from a Marvel movie, the anticipation of a new show, or just the sheer awesomeness of them.”

Stuberg, who has over 230,000 followers on the platform, says she spends 15-30 minutes “gathering reputable sources and double-checking facts” before publishing each video.

“Especially as a woman in this field, I tend to get people questioning my knowledge and looking to dispute my facts quite frequently,” she says.

At the same time, she says that TikTok’s parameters (videos can be a few minutes long at most) actually offer some creative freedom. “The short-form content takes some of the pressure off (which as a perfectionist with a tendency to procrastinate) can be very helpful,” she says. “Truthfully, all of my best ideas are very spur of the moment. I find that thinking too much over an idea can be the downfall of a video on TikTok.”

TikTok has opened the lines of communication for global MCU fans to connect, exchange knowledge, and form relationships that will transcend social media. As the world opens back up, MarvelTok figureheads like Green expect the connections he’s created virtually will become even more powerful at in-person events like Comic-Con.

“TikTok is going to change the game once everything is opened up again,” Green says. “There's nothing better than finding a stranger who loves what you're into and seeing them become a friend. TikTok has done that for me.”

Green and Stuberg have already teamed up to launch a podcast called Geeks of the Week outside of TikTok, and they have big post-pandemic plans.

“I can't wait to actually plan meetups with these people when Comic-Con comes back around,” Green says.

Stuberg says the podcast was a direct response to fans “begging for longer form content” about the ideas and theories they’d touched on in shorter one-minute videos. Geeks of the Week will give the duo a chance to get to know their fans (and each other) in a more relaxed setting.

“It’s the total opposite of TikTok,” Stuberg says. “We can have these big, exciting conversations without worrying about a time constraint.”

“It motivates me to keep going.”

“It's something that brought us together and made us really good friends,” Green adds. “So the benefits mainly are that we get to go more in-depth on our analysis, thoughts, and theories.”

But Green and Stuberg aren’t leaving TikTok for their new podcast. They still see MarvelTok as the thriving center of MCU fandom, and that’s not going away anytime soon.

“I read the comment and seeing hundreds of people like me making theories, expressing joy, disappointment, excitement about Marvel is something that I've wanted since I was a kid,” Green says. "I just always thought it would be a smaller group of people.”

The short-form platform is not only gifting people new communities and friendships with like-minded individuals. It’s also offering vital skills for creatives.

“Learning how best to articulate your point clearly in under 60 seconds is a valuable skill for getting through to people,” Stuberg says. “I frequently get messages not only from young people thanking me for helping them understand their feelings, but also from men telling me they never would have considered my perspective before and appreciate being better able to understand and make necessary changes.”

It’s truly the most remarkable thing,” she adds. “It makes the hard days easier, and it motivates me to keep going.”