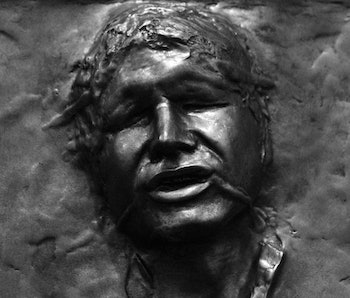 Star Wars comics are a storyteller’s dream. Characters can go on huge adventures without expensive production costs and VFX feats. But they also serve another purpose — tying together loose ends that may not ruin a movie-going experience but still nag at hard-core fans.

In recent years, Star Wars has been using its comics to fill in gaps between each movie in the original trilogy, but the latest issue may answer one of the biggest unanswered questions from another film — Solo: A Star Wars Story.

The new comic Star Wars: War of the Bounty Hunters #1 ends with a pretty huge twist. Set in between Empire Strikes Back and Return of the Jedi, we see Han Solo’s frozen body stolen while on its way to Jabba the Hutt. The comics final panel reveals the thief: Qi’ra, Han’s old girlfriend turned crime boss from Solo.

Qi’ra’s motivations are unknown, but it’s probable this theft has something to do with the Crimson Dawn, the crime organization run by Darth Maul. Qi’ra, knowing Han’s value to Boba Fett and more, importantly Jabba the Hutt, will probably use this stolen cargo to curry favor with those in power. (Is it possible she’s also looking out for her old beau, even while using his frozen body to make a quick buck?)

But more importantly, this appearance answers the question of what happens to Qi’ra after Solo. We never really learned what happened after her heel-turn against Han, something that presumably would have been explored in a Solo sequel or Disney+ spinoff how.

While her appearance in this comic will assuredly explain a lot, this “reunion” with Han won’t exactly be satisfying, as we know Han isn’t thawed from his carbonite stasis until long after he’s in his place as Jabba’s “favorite decoration.” But just because Han may not be conscious, it doesn’t mean Qi’ra won’t manipulate him further.

The last panel of this issue alludes to “guests” arriving soon. Perhaps, in order to make her way in the galaxy, Qi’ra will auction off the carbonized Han to the highest bidder, much like Doctor Aphra did with the Rur crystal. Or, instead of money, she’s using the bounty to trade the Crimson Dawn into a higher place of authority.

Much like all prequels, we know how this story will end, but it doesn’t make the journey any less interesting. How will Qi’ra navigate a post-Battle-of-Yavin Empire? Will any reference be made to the death of Maul in Star Wars: Rebels? Whose hands will Han Solo’s body go through on his way to Jabba’s knickknack shelf? We’ll have to wait for the next issues for answers.

Star Wars: War of the Bounty Hunters #1 is on bookshelves now.