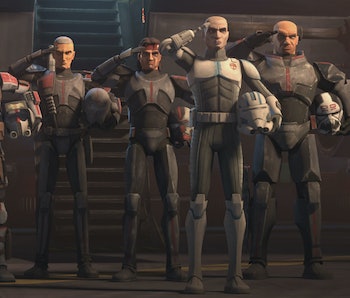 May the Fourth be with you! Lucasfilm and Disney+ have offered up a few gifts to mark the Star Wars universe’s biggest holiday, including a brand new TV series: The Bad Batch, a spinoff from Star Wars: The Clone Wars, the show that revolutionized Star Wars television for seven seasons. Here’s everything we know about the new season, from when exactly you can watch the first episode to what you should expect to see.

When is the The Bad Batch Episode 1 release date?

Like so many of the best things in the Star Wars universe, the release date is May 4, but don’t get used to the show releasing on Tuesdays. After the premiere, the show will move to Disney+’s standard Friday release slot. On the bright side, that only means a three-day wait for Episode 2, which will premiere on May 7.

What is the length of The Bad Batch Episode 1?

The Bad Batch is starting off with a bang. The first full-length trailer promises a “70-minute premiere,” which is not only longer than any other episode of Star Wars television, it’s longer than any episode of Disney+’s Marvel and Star Wars TV offerings. However, don’t get used to this length. From Episode 2 onward, the show should return to the standard of 30-ish minutes set by The Clone Wars and its sequel, Rebels.

What is the release time of The Bad Batch Episode 1?

Like all Disney+ releases, The Bad Batch will release at 12:01 Pacific time, meaning 3:01 Eastern. So if you’re in the US, prepare to be up late or set an alarm to catch it before anyone else.

What is the plot of The Bad Batch Episode 1?

The Bad Batch follows a rogue group of clones — Hunter, Wrecker, Tech, Crosshair, and Echo — as they negotiate a changing galaxy as the Empire comes into power. While that’s the only official synopsis, leaks suggest that at some point in the series we’ll see Crosshair turn against his team and side with the Empire, though that is unconfirmed.

The Bad Batch offers a unique opportunity for Lucasfilm: a chance to show the pivotal Order 66 moment from a new perspective than the ones offered in Revenge of the Sith and in the final episodes of The Clone Wars.

The Bad Batch premieres May 4 on Disney+.