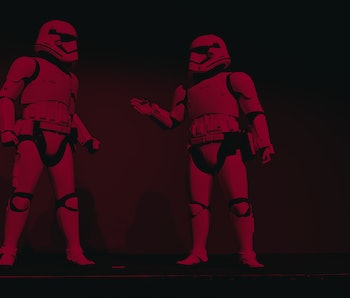 Say what you will about the guy, but, Emperor Palpatine was great about accomplishing his goals. Bring back Sith dominance? Check. Destroy the Republic? Check. Wipe out the Jedi?

The weirdest thing about the Empire in the classic-trilogy era of Star Wars isn’t about the rise of Palpatine’s regime. The biggest plot wonkiness in Star Wars is found in how Palpatine maintained it. On a big-scale, we know what his long-term plan was: maintain control through fear. If your planet got out of line, Palpatine would blow it up with the Death Star. But what about before that?

The short answer: if you messed with Palps, he sent in the stormtroopers. Or his clone army. Or ... wait. Who was doing the dirty work in the early years of the Empire and why did they switch?

In The Force Awakens, Kylo Ren backhandedly tells Hux that maybe Snoke “should consider a clone army,” since the First Order stormtroopers liked to defect. But the real question — and one that Star Wars canon has never answered convincingly — is more direct: Why the hell did Rey’s grandfather Palpatine decide to swap out obedient clones for human stormtroopers?

As I write this, I can hear knuckles cracking from hardcore fans, ready to send me a detailed explanation from Wookieepedia that answers this question with some “well actually” fact-bombs. So, let’s get ahead of all that. Here’s what Wookiepedia says:

“The Galactic Republic was supplanted by the Empire, and the clone troopers who formed the backbone of the Grand Army of the Republic became the first generation of Imperial stormtroopers. During the early years of the Imperial Era, the cloning operation on Kamino was shut down as the Empire turned to conscription and recruitment in order to fill the stormtrooper ranks. The remaining clones were retired from service due to their rapid aging, their legacy inherited by natural-born humans who were also trained to render total allegiance to the Emperor and his New Order.”

So, here’s the problem. To quote the beloved droid K-2SO, this explanation is “vague and unconvincing.” The canonicity of this explanation is mostly derived from a non-fiction book called, The Star Wars Book, written by Pablo Hidalgo, Cole Horton, and Dan Zehr. The explanation hasn’t been spelled out in actual storytelling, but rather, background exposition.

It’s also a little bit how everyone talked about the origin of Darth Vader pre-1999; vague platitudes that led to a very specific person in a very specific costume. Canonically, we’ve been told — in passing — why the clone army became a human army, but we haven’t been shown why this happened. Imagine if Anakin’s backstory was still like a short PowerPoint presentation; that’s the “in canon” explanation we have right now for the clones and stormtroopers of it all.

Poking holes in the explanation as it lies, the aging process with clones is up for debate. In Star Wars Rebels, we see prominent clone trooper Rex age normally. Sure, he’s not a “normal” clone, because he evaded Order 66, but still.

Second, the Empire couldn’t figure out how to just start over with a new Clone template? Was Jango Fett really the only badass they could clone? This feels silly. The clone army worked really really well for at least three years, using one guy as a template. With the exception of like five or six guys, millions of clone troopers obediently carried out Order 66 and straight-up killed their Jedi generals. From Palpatine’s point-of-view, this is a good system. Why then, replace it with more conventional stormtroopers? One assumes the stormtroopers don’t begin their life with mind-control chips, automatically making them less reliable than the clones. Right now the explanation for this change translates to “Eh, it was easier.”

If you’re a 10-year-old and you watch Attack of the Clones, the visual evidence leads to the conclusion that the clones are the stormtroopers from the classic trilogy. Having someone come in and tell you “well, no, they switched to humans” is strange enough to feel like a mistake.

Enter: The Bad Batch. This Star Wars TV series is uniquely positioned to elucidate a very odd period of time in the franchise’s history: the very first years of the Empire.

In the coda to the final Clone Wars episode, Darth Vader is surrounded by a bunch of stormtroopers who seem to be chatting away with voices that are not like the clones, strongly implying this changeover happened pretty fast. Then again, we don’t know exactly when the Vader scene happens relative to the rest of the timeline. It’s after Order 66, sure, but when? A year? Two? Even more?

Because The Bad Batch literally focuses on a group of botched (“bad”) clones, then it stands to reason these characters will have some stake in what happened to their other clone brethren. Right now background canon tells us all these clones were just retired because it was too much trouble. But, what if it was much more than that?

If The Bad Batch solves any old Star Wars canon mysteries, it will easily be this one. The answer could very well impact everything we thought we knew about this changing of the guard.