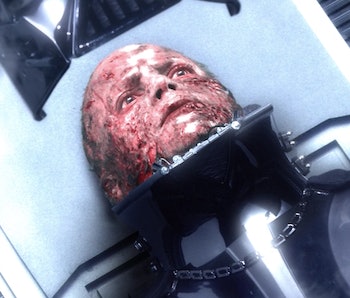 The ghost of Anakin Skywalker has only appeared onscreen once, but the notion of seeing him again has haunted Star Wars fans for decades. If we say "Hayden's mullet" three times in the mirror, what will happen? Sure, we heard Hayden Christensen's Anakin speak to Rey in the climax of Rise of Skywalker, but we haven't seen Anakin in awhile.

Right now, outside of The Mandalorian Season 2 and The Bad Batch, it's not really clear when the next big Star Wars show will debut. We know there's an Obi-Wan Kenobi series in the works, as well as a Cassian Andor show and maybe a show about Doctor Aphra.

Now, a totally unverified rumor claims Christensen will return for the Obi-Wan series in what might be an ongoing role. Here are three ways Anakin Skywalker could appear in a real-deal Star Wars TV series in the next few years.

3. Anakin could appear in Kenobi flashbacks

The Kenobi series could take a storytelling cue from Star Trek: Picard and open several episodes with flashbacks. After all, Christensen and Ewan McGregor look pretty similar to how they looked 15 years ago in Revenge of the Sith, it wouldn't be too hard to revisit a time when Obi-Wan and Anakin were still buddies. Let's face it, Obi-Wan sitting around thinking about Anakin will be at least some part of the Kenobi series. If he's thinking about Anakin, it stands to reason we could see his memories.

2. Anakin's ghost could appear to Ahsoka

Here's something we don't talk about. How often did Anakin's ghost communicate with people after he turned back to the light side in Return of the Jedi? In The Force Awakens, we were led to believe Kylo Ren was communicating with Anakin's spirit, but it turns out that was just Palpatine doing a Darth Vader impression. Luke was smiling at the ghost of his father in the final shot of Return of the Jedi, but after that, it's a little unclear how much Luke (or anyone else) talked to Anakin's ghost. While one canon book does seem to imply Luke communicated with Anakin's ghost a decent amount, it's never been depicted on screen.

This means Anakin's ghost could totally contact Ahoska in Mandalorian Season 2. We know Rosario Dawson is set to play Ahsoka in Mando Season 2, and there's a good bet her role will have something to do with Baby Yoda. Post-Rebels, we don't know what Ahsoka's relationship is with the Force, but it seems possible that she'd be very curious about Anakin turning back to the Light Side of the Force. After all, she was straight-trained by Anakin. Would he really appear to his son, but not to his former student? Anakin's ghost ghosting Snips feels wrong. If there's a chance for him to pop in and bother her, like Yoda's ghost making fun of Luke in The Last Jedi, it should happen.

1. Vader could show up in the Cassian Andor series

Presumably, the Cassian Andor series takes place before Rogue One, during the Rebellion Era, there's a real chance Vader could appear. In Rogue One, we briefly saw Darth Vader's body suspended in a Bacta Tank on the planet Mustafar. For this scene, there's evidence that the body sculpt used for Anakin/Vader in this scene was modeled to look like Hayden Christensen. (Which would make sense.) Obviously we didn't see Vader's "face" in this scene in Rogue One, but that doesn't mean we never will.

In The Empire Strikes Back, Vader has a meditation pod in which he very clearly removes his helmet from time-to-time. If Darth Vader is in the Cassian Andor series, and we visit him on Mustafar again, or in his meditation pod, then that means he could take off the helmet. And if that happens, we know who we'll see underneath.

Of course, this idea could work for the Obi-Wan series, too. If Darth Vader is running around the galaxy, having telepathic mind-chats with Obi-Wan, then a de-masked Vader could show up there, too. Then again, all of this talk of seeing Darth Vader in between the end of the prequels and the beginning if A New Hope really makes you wonder — why not just give us a Vader show?

The Mandalorian Season 2 comes to Disney+ in October.