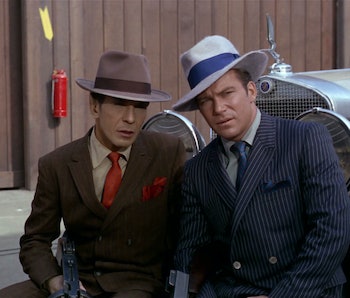 Since 2009, there have been two worlds of Star Trek: The Prime timeline that encompasses the majority of the franchise, and the Kelvin timeline that spans the three "reboot" films from director J.J. Abrams. Right now, the division between these parallel realities seems fairly stark. When Spock and Pike returned for Discovery Season 2, they were not played by reboot actors Zachary Quinto or Bruce Greenwood. If Kirk appears on Strange New Worlds, it's a safe bet he won't be played by Chris Pine. The Kelvin timeline is its own thing.

But what if it wasn't? Recently, new details emerged that Quentin Tarantino's take on a possible Star Trek movie would go back to a zany concept from Star Trek: The Original Series. This concept could actually unite the Prime and Kelvin canons. In case Tarantino (or Paramount) is listening, here's how to use the Mobster Planet from "A Piece of the Action" to bridge the gap between the two timelines. Wild speculation ahead.

The "mobster planet" in TOS, explained — The Season 2 Original Series episode "A Piece of the Action" sees the USS Enterprise visit planet Simga Iotia II. Previously, this planet had been visited by a much older Earth starship, the USS Horizon, and left behind a variety of things to help the Iotians develop their technology. However, the Horizon also left behind a historical book called Chicago Mobs of the Twenties. Because the Iotians are a "highly imitative," society, they took the writings in this book as a kind of bible, constructing their whole society around the "rules" of a mafia. For the most part, this episode is played as comedy, but that doesn't mean that Kirk, Spock, and Bones don't take the problem seriously. It's just that the problem requires them to cosplay.

Kirk eventually convinces the mobsters to become more peaceful by pretending like the Federation is an even bigger mob that's moving in and taking over. The episode ends ominously because Bones realizes he's left behind his communicator, which could result in the Iotians learning how to imitate Starfleet tech. Kirk jokes that at some point in the future, the Iotians might "demand a piece of our action!" So, the idea was, that in the future, the mobster planet, could become a DIY Starfleet planet.

Was there ever a sequel to "A Piece of the Action"? Yes and no. While there is no in-canon sequel to this episode, Star Trek novels, and comic books have touched on the idea that the Iotians would morph from becoming wannabe gangsters to wannabe Starfleet officers.

In the recent IDW comic book series "Star Trek Year 5," the Enterprise returns to Simga Iotia II and find half the planet has created a kind of miniature version of the Federation, including their own versions of Starfleet uniforms. The 1989 reference book Worlds of the Federation asserts the same premise in its section on Iotians, depicting the average citizen as someone who switched from dressing like a mobster to dressing like someone from Kirk's Enterprise. This concept was so pervasive that in 1996, the writers of Deep Space Nine considered revisiting the Iotians for the 30th anniversary of Star Trek and depicting them basically, as a planet of Star Trek fans. In other words, the future of the mobster planet was very often a type of Galaxy Quest premise. What if aliens within the Star Trek universe tried to copy Starfleet?

How this could link the reboots with the Prime universe — There seem to be three ways Tarantino's take on "A Piece of the Action" would have played out:

The last option is actually the most interesting. Here's how it could work: Imagine the Chris Pine Enterprise crew investigating a strange Starfleet signal from Simga Iotia II. When they get there, they find a planet half populated by mobsters, and half populated with wannabe Starfleet imitators. The faux-Starfleet folks could be dressed in TOS '60s style uniforms, because these are the same people who were influenced by Kirk, Spock, and Bones in TOS. Kelvin-Kirk and his crew would have to figure out how the planet came to exist and why all these people were rocking goofy Starfleet uniforms?

If the mobster planet were presented as a confluence of classic and reboot canon, some quick explanation could be offered: Maybe Sigma Iotia II exists near some kind of interdimensional rift. Turns out, this imitative society could be constantly exposed to other dimensions and realities. That means they exist simultaneously in the Kelvin Universe, the Prime Universe, and maybe other dimensions too. Kind of like a Brigadoon of parallel dimensions.

Naturally, this concept is 100 percent fan fiction, and there's no reason to think Tarantino actually thought about bringing the mobster planet back like this. But if there was anyone who could naturally connect complicated canon by presenting two alternate universes overlapping, it's Quentin Tarantino. Just look at Once Upon a Time... In Hollywood or Inglourious Basterds. Merging alternate universes is what Tarantino is all about.

The next Star Trek feature film is still in development.

More like this
Entertainment
Jan. 30, 2023
The Last of Us Episode 3 Features One Subtle Video Game Easter Egg
By Alex Welch
Culture
Feb. 2, 2023
Buck Rogers in the 25th Century’s Most Baffling Change Also Gave Us Its Best Character
By Ryan Britt
Culture
Jan. 25, 2023
30 years later, Star Trek is about to pay off a massive villain comeback
By Ryan Britt
LEARN SOMETHING NEW EVERY DAY.
Related Tags
Share: