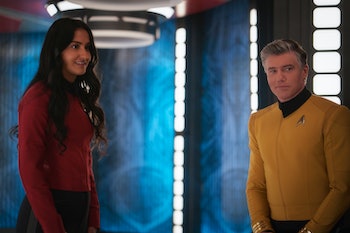 We don't yet have a full picture of the crew of the classic USS Enterprise for the upcoming spinoff show Star Trek: Strange New Worlds. All we know is that the three leads — Captain Pike (Anson Mount), Number One (Rebecca Romijn), and Spock (Ethan Peck) — are due to return.

The Discovery Season 2 finale featured an entire Enterprise bridge crew consisting of Lieutenant Amin (Samora Smallwood), Lt. Mann (Hanneke Talbot), Lt. Nicola (Chai Valladares), and Yeoman Colt (Nicole Dickinson). CBS has yet to confirm if any of these characters or actors will return for Strange New Words, even though we did see Lt. Amin in the flashback Short Treks episode "Q&A."

That said, one relatively recent addition to the Enterprise crew could join Strange New Worlds after all. That seems more likely thanks to a recent Twitter tease from CBS.

Light spoilers ahead for Short Treks "Ask Not."

Back on September 16, the Star Trek on CBS Twitter account shared a Q&A with several cast members answering questions from fans, including Mary Chieffo (L'Rell on Discovery), Alison Pill (Jurati on Picard), and Amrit Kaur (Cadet Sidu on Short Treks.)

Arguably, two of these actors are not slated to return to any existing Trek projects. L'Rell was left behind in the 23rd Century in Discovery Season 2, and we have no idea if she'll appear in Strange New Worlds. But since Chieffo is a well-known Star Trek cheerleader, the more intriguing inclusion was Kaur, who has only appeared in one Trek thing ever — the Short Treks episode "Ask Not."

In the episode, Cadet Thiru Sidhu gets recruited to join the Enterprise in the most messed-up way possible. Pike makes her think he's gone rogue and it's her job to keep him from breaking all of Starfleet's rules. The point of the test in "Ask Not" is to see if Sidhu is willing to follow the rules, even when someone cool like Pike tells her to bend them. She passes the test and lands a spot on the USS Enterprise.

This single episode of Short Treks revolved entirely around one character — who we had never seen before — finding out she was being recruited to join the Enterprise via a secret mind-game test. In 2019, Kaur told me that her Short Treks episode "stands on its own," but that she'd be eager to return to the franchise: "Of course I'd come back. I'd be so grateful."

Kaur taking part in a fun fan event for CBS does not mean that she's been cast as Sidhu in Strange New Worlds. This is just speculation. But if she is doing promo for Star Trek nd she's not coming back, it seems like a missed opportunity. "Ask Not" created an intense and emotional backstory for a truly memorable character. Sidhu could easily act as an audience surrogate for Strange New Worlds, and isn't saddled by a canon-heavy backstory. Right now, that's something Strange New Worlds desperately needs.

If Kaur did return in Strange New Worlds, it would make an exciting show a little bit more grounded. It would also deliver on a promise offered by Short Treks. Sure, these stories are mostly self-contained, but several episodes of Short Treks have foreshadowed larger events in the unfolding new canon of Trek on TV. Why should the story of Sidhu be any different?