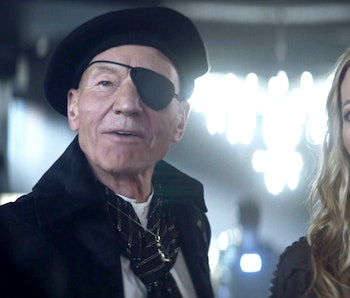 Last week's episode of Star Trek: Picard, "Broken Pieces," kicked off with another unexpectedly gory cold open. First, Seven's dear friend Icheb brutally lost his eye (and life) to Bajayzl back in episode 5, and last week's Admonition reveal brought us the lovely image of a woman clawing the skin off her face in livid red streaks. Delightful stuff.

We also learned that the Romulans were behind the Mars synth rebellion that prompted the Federation's android ban, and learned that Rios has met another "version" of Soji once before, during his tragic stint on the Ibn Majid. After a novelistic and leisurely start, Picard's story is starting to move a lot more briskly.

Wondering when you can tune in to Picard episode 9, "Et in Arcadia Ego, Part 1"? We've got you covered.

What to expect from Picard episode 9, "Et in Arcadia Ego, Part 1"

We're nearing the endgame of Picard's 10-episode first season, and if that "part 1" in the episode title didn't tip you off, expect a cliffhanger before the season finale. Now that we know more about what the Tal Shiar have been plotting all this time, there's a showdown brewing between android-loving Picard and the android-loathing Romulans.

Here's the official synopsis for the first half of the two-parter "Et in Arcadia Ego," courtesy of CBS:

Following an unconventional and dangerous transit, Picard and the crew finally arrive at Soji's home world, Coppelius. However, with Romulan warbirds on their tail, their arrival brings only greater danger as the crew discovers more than expected about the planet’s inhabitants.

When are new episodes of Picard uploaded to CBS All Access?

In the United States, CBS All Access releases new episodes of Picard at 3 a.m. Eastern on Thursday mornings. If you're on the West Coast, you're in luck: new content arrives on the platform at midnight local time, so you can catch "Et in Arcadia Ego, Part 1" late Wednesday night.

If you haven't checked out Picard yet, and are on the fence about subscribing to yet another streaming service, you can watch the first episode free on the CBS official site. Beyond that, the service offers a one-week free trial period. If you choose to keep your subscription going longer than a week, you'll pay $5.99 per month for shows with advertisements, and $9.99 monthly for commercial-free access to CBS programming.

If you're watching Star Trek: Picard from outside the U.S., new episodes will be uploaded to Amazon Prime Video each Friday.