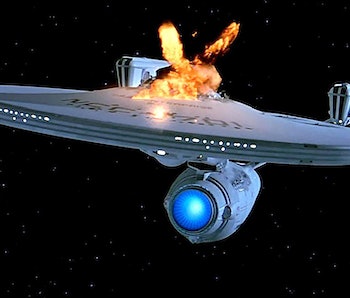 After the original Star Trek television series ended in 1969, several cast members worried they’d never escape the shadow of the USS Enterprise. This was not the case for Leonard Nimoy. The Spock actor quickly found work on the action-adventure series Mission: Impossible as a magician-turned-secret agent.

From there, Nimoy’s career blossomed. He appeared regularly on TV, from guest appearances on Colombo to an Emmy-nominated performance as the husband of Israeli Prime Minister Golda Meir. He explored the theater, playing Sherlock Holmes with the Royal Shakespeare Company and starring in One Flew Over The Cuckoo’s Nest a year before the Jack Nicholson movie debuted.

Nimoy kept busy, although Star Trek kept calling. Years of personal animosity with Gene Roddenberry — and a lawsuit over Paramount using his likeness without permission — had to be settled to make 1979’s Star Trek: The Motion Picture. Things went smoother the next go-around when he delivered a marquee performance of his career in The Wrath of Khan. Spock’s demise was so iconic that rumors spread that the ever-busy Nimoy had only taken on the project to take out Spock once and for all.

The rumors were wrong. Nimoy was more interested than ever. In fact, he wanted to direct. The result was 1984’s Star Trek III: The Search for Spock, perhaps the most introspective movie the long-running franchise ever produced. While Spock barely appears, his presence looms large in a story where the main antagonist is hubris itself.

Search follows directly after Wrath of Khan, opening with Spock’s tragic passing and his legendary declaration that “the needs of the many outweigh the needs of the few.” The Enterprise heads back to Federation space battle-scarred while the real action takes place Genesis, a planet created during the events of Khan. While Admiral Kirk (William Shatner) tries to process the loss of his friend and run a starship, his son David (Merritt Butrick) is exploring the new world with a Vulcan named Saavik (Robin Curtis, replacing Kirstie Alley).

As Kirk bemoans a crew unable to move past its trauma, his new acting science officer, Pavel Chekov (Walter Koenig), makes a surprising discovery: there are life signs in Spock’s quarters. Spock sealed them up himself, but something is in there. Kirk investigates only to find Spock’s old rival, Dr. McCoy (DeForrest Kelly).

McCoy is acting strange and tells Kirk about he must go to Vulcan. Back on Earth, Spock’s father, Sarek (Mark Lenard) reveals there are two parts to a Vulcan person: their body and their katra (everything which is not the body). Both have to be at rest in order to respect Vulcan tradition. Upon further examination, it’s revealed that Spock spent his last moments transferring his katra to McCoy.

As for his body? Well, on Genesis, David and Saavik are exploring a world where life evolves at a rapid pace. That includes everything from giant worms to an oddly quiet Vulcan child... However, a Klingon named Kruge (Christopher Lloyd, a year before Back to the Future) sees the creation of Genesis as the introduction of an amazing new weapon — and will stop at nothing to get its secrets.

Kruge brings with him wonderful special effects, like a very cool Bird of Prey and playing around the Genesis worms. But while Lloyd does a great job (as usual), Kruge is an underdrawn character, a villain-of-the-week inserted into a serious story. Nimoy, proudly and vocally Jewish his whole life, made Search a movie with strong Christian connotations, including David and Saavik finding Spock’s coffin empty, which leads to an eventual resurrection. Lloyd’s character adds little to this narrative.

Search is a movie of muted optimism. The Genesis planet plays its role by bringing Spock back, but it brings just as much devastation (if not more). While it’s not a crucial plot point for the movie, David’s murder at the hands of Klingons forces Kirk into the type of “no-win situation” he once mocked. Kirk stumbles back into his captain’s chair, a weakened man. The movie doesn’t dwell on David’s passing — the title is Search for Spock, after all — but it’s a plot point that would play into future films, helping to complete Kirk’s arc.

One gets the sense that Nimoy was bursting with ideas while making Search. There are several moments in the movie that could have functioned as their own story: busting McCoy out of a hospital, Uhura taking charge with an officer, the mysticism of Vulcan philosophy, the changes of to the Genesis planet, Kirk’s loss of David.

Nimoy didn’t just want to make an extended episode of television, he wanted a tonal change for the franchise, a first step into the darker waters it would later find during Deep Space Nine. Behind the camera, Nimoy boldly went where Star Trek had never gone before, but would eventually go again.

Star Trek III: The Search for Spock is streaming now on HBO Max.