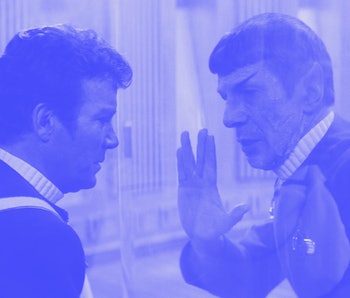 Coming back from the dead, at least in Star Trek, ain’t no big thing.

And in the new Lower Decks episode — “We’ll Always Have Tom Paris” — we’re quickly reminded of all the various ways someone can come back from the dead in Star Trek canon. From “a transporter buffer thing” to a “Mirror universe switcharoo,” there are nearly infinite ways for characters in the 22nd, 23rd, 24th, and 32nd centuries to cheat death.

But, up until now, there’s just been one tiny little detail that’s made almost zero sense: When major Trek characters come back to life, how is it explained to the people who weren’t there?

How could countless (millions?) of people simply accept that Spock came back to life after he was declared dead? What about Captain Georgiou? In Lower Decks, this strange game of canon telephone is directly addressed, with a hilariously profound answer. Spoilers ahead for Star Trek: Lower Decks Season 2, Episode 3, “We’ll Always Have Tom Paris.”

The return of Shaxs — explained?

In the Season 1 finale of Star Trek: Lower Decks, “No Small Parts,” Lt. Shaxs (Fred Tatasciore) was killed on a shuttlecraft while rescuing Rutherford (Eugene Cordero). There was a classic Star Trek funeral for Shaxs and everything. We saw the ship he was on explode. The character was dead. And yet, in opening moments of “We’ll Always Have Tom Paris,” Rutherford and Mariner spy Shaxs just casually ordering a hot dog from a food replicator. WTF??? How is Shaxs alive?

The entire episode teases us with a possible explanation, but because it reveals that there is no explanation, this inherently addresses one of the biggest plot holes in all of Star Trek. What the general public knows is different from what the main characters know. Plenty of people have to be totally cool with living their lives out side-by-side with utterly miraculous events, even if despite never being given the details.

Rutherford is inconsolable. “They’re gonna tell me how he came back, right?” And Mariner responds, “Nope.” Of course, throughout the episode, Rutherford can’t accept this, because the one memory he has before the explosion is that Shaxs saved his life. Even the ever-curious Boimler is disinterested in how Shaxs returned, saying, “Eh, Bridge Crew always come back.”

What’s hilarious and smart about all this is that Rutherford’s curiosity about Shaxs cheating death is presented as abnormal. Mariner and Boimler are as different as can be, and they both are 100 percent apathetic when it comes to learning how a colleague came back to life. A hilarious send-up of previous Trek resurrections that says everything about Trek canon in general, it’s also a pretty spectacular paradigm shift.

If you lived in a future world in which these kinds of sci-fi events weren’t science fiction, then it stands to reason that your value system would change correspondingly. Sure, people in Starfleet fear death, but perhaps a little less than humans do in the 21st century.

What Lower Decks clearly establishes is that, by the 24th century, human society (and probably several other cultures) will have a completely different viewpoint on mortality. Some of this was likely shifting during Kirk’s years, since most of his colleagues were incredulous about “Vulcan mysticism” as it pertained to Spock’s immortal soul.

But, as revealed in The Search For Spock and later Star Trek: Enterprise, Vulcans have been pushing forward the conversation around life after death for a very, very long time. Mariner even mentions a “restored Katra” (the Vulcan method of transferring a soul) as one possible explanation for Rutherford’s resurrection.

Since 2063, Vulcan society has been integrating with human society, post-First Contact, which means humans have gradually developed new perspectives on life and death. Again, in Kirk’s time, this might not have been totally widespread, but by 2381, in the era of Lower Decks, it feels very likely that the return of Spock was just the tip of the iceberg.

In the 24th century, Mariner and Boimler have a good idea of how Spock came back, but what about back in 2293? Do we really think everyone who served on the USS Enterprise-A was totally briefed about Spock’s Katra and regenerated body?

This thinking works for Discovery, too. In Season 2, even Captain Pike (who is a Bridge officer) is fuzzy on how Captain Georgiou survived being eaten by Klingons. In Discovery, Pike has to intuit that there’s something else going on there, which is why he feigns surprise about the Mirror Universe in “Such Sweet Sorrow Part 2.” And that’s way back in 2258!

By the late 24th century — an era that includes Voyager, Deep Space Nine, Picard, and Lower Decks — it seems clear that humans have shifted their expectations regarding mortality. In fact, Picard Season 1 PROVED it by having everyone pretty much shrug their shoulders when Jean-Luc died and then came back as an android.

Humans in the Trek future don’t expect to live forever. But, as Lower Decks explains, they also might not expect to stay dead either.