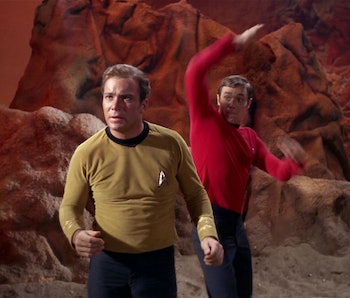 Redshirts are a classic Star Trek: The Original Series trope. If Kirk, Spock, and some rando wearing a red uniform beam down to an unknown planet, fans know there’s a good chance the third wheel won’t survive. But what happens when those “expendable” characters do pull through? In the Star Trek: Prodigy episode “All the World’s a Stage,” the crew of the Protostar encounters an entire planet inspired by a redshirt from The Original Series. The writer of this episode, Aaron J. Waltke, talked to Inverse about what it all means. Spoilers ahead.

In “All the World’s a Stage,” the scrappy crew of the Protostar encounters a planet of friendly aliens who have structured their entire culture around The Original Series. Contact with an Enterprise officer from the 2260s somehow transformed the entire culture of these aliens, who now refer to themselves as “Enderprizians” and uphold the ideals of “Star Flight.”

It’s a game-of-telephone take on how an innocent alien species might interpret Starfleet if they’d only had a tiny bit of contact with one member of the Enterprise crew. This is obviously riffing on Galaxy Quest, but it’s also a reference to several TOS episodes in which the Enterprise encounters alien planets that have been transformed by outside influences.

Waltke thinks this episode actually answers the question raised by another TOS episode, “A Piece of the Action.” In that strange 1968 installment, Kirk, Spock, and Bones grapple with a planet where the entire population act like 1920s mobsters because a starship accidentally left a book about Chicago mobs there a century prior. In a hilarious ending, Bones admits that he left his communicator on the planet, which means the cycle of outside influence has started all over again. Star Trek canon never revisited Sigma Iotia II, but Waltke points out that Prodigy addresses a question lingering since the twist ending of “A Piece of the Action.”

“They were ominously wondering whether [Bone’s communicator] will influence that society a hundred years hence the same way a dime store gangster novel did,” Waltke tells Inverse. “This episode is a sort of spiritual answer to that question.”

But Waltke also says the episode is a commentary on how the ideals in Star Trek don’t always match up with the real world, and how that fact doesn’t make the lessons of hope any less important.

“As a young Trek fan, I certainly aspired to be like my favorite Starfleet captains -- but I didn't always see the utopian ideals of the Federation being upheld here on then 20th century Earth,” he says. “Over time, I realized it's that power of belief -- in ourselves, and a better tomorrow, despite the hardship of the present -- that could one day make Starfleet a reality. Dal learns that despite appearances, Starfleet can come in all shapes and sizes; we're all part of one greater whole.”

“All the World’s a Stage,” hinges on the question of which Starfleet redshirt was stranded on this planet. In the end, thanks to a log entry discovered on the retro shuttlecraft Galileo, we learn that Ensign Garrovick, from the TOS episode “Obsession,” became stuck there during a later stage in his career.

In “Obsession,” Garrovick (Stephen Brooks) was notable because he was one of the few redshirts to survive an expedition. The son of Kirk’s old captain on the USS Farragut, Garrovick actually saves the day. He doesn’t even need to heroically sacrifice himself, instead living to return aboard the Enterprise. However, because we never saw him again, Waltke saw some canon wiggle room.

“Garrovick had a heroic moment battling the dikironium cloud creature with Kirk in the Season 2 episode ‘Obsession,’ but then he was never seen again on the show,” Waltke explains. “Similarly, the Galileo shuttlecraft was suddenly replaced or renamed to Galileo II between Seasons 2 and 3 without explanation. It's reasonable to assume that both Garrovick and the Galileo from ‘Immunity Syndrome’ were lost on an unseen adventure between those seasons.”

What are the Galileo shuttles?

Casual fans of The Original Series may be slightly confused when Pog, Rok-Tahk, and Gwyn discover the source of the radiation leak is an old Enterprise shuttle called “the Galileo.” Didn’t the Galileo burn up in the TOS Season 1 episode “The Galileo Seven?” Yes, but as Waltke and other detail-oriented fans know, The Original Series had a few more Galileos, with no real explanation as to why. Just like redshirt crewmembers were expendable and replaceable, Starfleet clearly threw a lot of shuttlecrafts called Galileo at the Enterprise.

“There have been numerous shuttles that were lost and christened ‘Galileo’ throughout the shows and films without much explanation,” Waltke says. “So, in theory, this shuttlecraft could be any of those. But in my mind, this is the last Galileo of the original Enterprise, to be succeeded by the ‘Galileo II.’ In my mind, [Garrovick] was doing some routine shuttle test when a classic Trek anomaly caused the shuttle to veer wildly off course and crash in the planet’s unseen dilithium cave system.”

There you have it! Prodigy expanded the story of a TOS redshirt and the strange mystery of how many shuttles were dubbed “Galileo.” If the heartwarming optimism of Prodigy doesn’t get you, the thoughtful attention to old-school Trek will.

This article was originally published on November 11, 2022