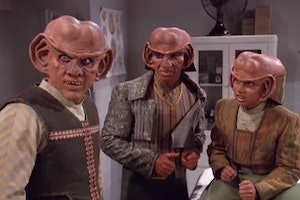 When Jake Sisko, a teenager on Star Trek: Deep Space Nine, explained humanity’s position of abandoning money, his friend responded with "What does that mean exactly?" Jake was stumped.

That episode, “In the Cards,” was one of a series from the ‘90s spinoff that gave Star Trek creator Gene Roddenberry’s utopian vision of a culture that had evolved beyond capitalism a darker, more realistic edge. And those challenges make Deep Space Nine more relevant than ever today when our own economic notions are being challenged by a battle between hedge funds and a loosely organized Reddit army over the stock market, with failing retailer GameStop caught in the crossfire.

But to truly understand the connection between Star Trek and GameStop, we need to talk about the Ferengi.

Deep Space Nine continually expanded Trek's idea of the “good guys,” imparting new depth to an alien race previously seen as one-note. The Ferengi were introduced in Star Trek’s hit ‘80s series Next Generation as sexist, possibly cannibalistic cretins, but by the end of Deep Space Nine audiences had seen them hold strikes, push for women's rights, and perform great heroics in war. Manu Saadi, the author of Trekonomics, has said that the Ferengi journey is "a metaphor for all of us becoming better by watching Star Trek.”

But perhaps the most important thing about the Ferengi is that they are familiar with Wall Street (as established in Star Trek: Voyager). What’s more, the Ferengi Market Exchange works in ways roughly similar to the current market — albeit likely with more open corruption.

Unlike our real-life stock market, the Ferengi version actually has rules, and they’re laid out in an in-universe book called the Rules of Acquisition. With Wall Street on the verge of a meltdown at the hands of an online community called r/WallStreetBets, do the Ferengi have anything to teach us about the right way to do capitalism? Let’s take a closer look.

The Ferengi have a whole book full of financial lessons that could help the Redditors of r/WallStreetBets and hedge fund managers. It’s called the Rules of Acquisition, and it’s essentially the Ferengi bible.

“Opportunity plus instinct equals profit,” goes Rule Number 9, heard in DS9’s “The Storyteller.” This is a lesson that r/WallStreetBets learned well. Keith Gill, one of the retail traders pushing the financial play on GameStop, was making money on the stock as far back as 2019, he recently told the Wall Street Journal.

Gill didn’t rely just on the opportunity he had with GameStop. He and other retail traders banked on the instinct that their moves would soon be easily replicated and that people on Reddit and Twitter would be drawn in by memes and a catchy slogan about blasting off to the Moon. They were counting on not just an opportunity, but that their financial play would “take on a life of its own,” as one analyst told the Journal. And it did.

“Once you have their money, you never give it back,” goes Ferengi Rule Number 1. This has been a key element of the r/WallStreetBets play, trying to keep everyone involved from selling their GameStop stock.

"We can remain irrational longer than they can remain solvent," went the rallying cry, and the fake sea shanty put out telling the tale of the stock market move (a 2021 sentence if ever there was one) encouraged buyers to hold, or HODL, the acronym for “hold on for dear life.”

“When the messenger comes to appropriate your profits, kill the messenger,” goes an unnumbered rule in Voyager classic “False Profits,” invented by the Ferengi Arridor. The episode follows a pair of Ferengi who wind up stuck on the wrong side of an unstable wormhole and proceed to pillage a nearby planet until the Federation shows up.

In this scenario, the Federation can be seen as a metaphor for the popular trading app Robinhood, which thousands of people used to invest in GameStop and other “failing” stocks like Nokia and AMC. Turns out, the Federation provided the Ferengi with the means to get to the wormhole in the first place, but once the Ferengi began expanding into new territory, the Federation tried to make them stop by exposing them to the planet as frauds.

Robinhood recently put intrepid Redditors in a similar situation. The company stated that it had to freeze, and then significantly slow, its trading of GameStop to meet “SEC net capital obligations and clearinghouse deposits.” A loud chorus of retail investors disagreed, culminating in a class-action lawsuit against the company. Once their messenger to Wall Street became unreliable in their eyes, they wasted no time going in for the kill. Just like the Ferengi might have done.