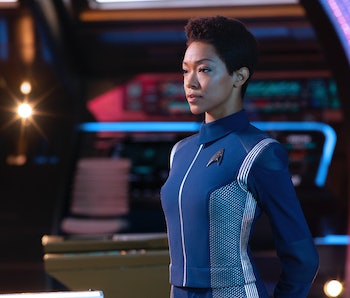 Like the Dark Arts Professor at Hogwarts, the captaincy of the Discovery changes every year. In Season 1, we had Captain Lorca. In Season 2, it was Captain Pike. Now, in Season 3... we don't know yet. The Season 2 finale hinted it would be either Burnham or Saru. The Star Trek panel at San Diego Comic-Con included a small hint the next captain could be someone else, who would actually make a lot of sense.

After a live table-reading of the Discovery Season 2 finale, the cast discussed what's in store for their characters in Season 3. One hint stands out. Showrunner Michelle Paradise asked Mary Wiseman (Tilly) a question about whether Tilly still wants to be a captain now that so much has changed. Here's how Wiseman responded:

"I think so. There are some pretty big speed bumps in Season 2 on that road. But that's always her pie-in-the-sky, reaching the zenith of leadership within Starfleet. You'll get to see more about that journey in Season 3. But, we're also really on the edge of the unknown, so I think all our ideas about what the future holds and who we want to be are going to be transformed."

Could Tilly end-up being the next Captain of the Discovery? The panel questions came from fans, but if the showrunners didn't want to talk about Tilly's dream of becoming a captain, they certainly didn't need to bring it up. While there's little to suggest that Tilly will move up the ranks in Season 3, Captain Saru or Captain Burnham both seem too obvious. And let's not forget that in the Mirror Universe, Tilly was the Captain of the ISS Discovery.

So, could Season 3 surprise us all by making Tilly the Captain of the Discovery? We don't know yet, but the evidence is certainly there. Tilly's desire to get into the command training program in Season 1 is a big deal. In Season 2, she is in that program and doing pretty well.

Saru has been the default captain because of this status as the First Officer, but you don't really get the sense that he wants it. Burnham was told she should be a captain in the very first episode, but what if she doesn't want it, either? Burnham feels like the right choice to be the captain of the USS Discovery, but then again, if the character's journey leads here elsewhere that could, be kind of cool, too. Unlike other Trek shows, the main characters of Discovery don't have to the leaders of the ship. If Burnham becomes the Captain, it would be satisfying, but it would also make Discovery a lot like other Trek shows. If Tilly became the Captain, it would be a little more radical.

Right now, it's thought to say how it will shake out. But one thing is for sure, we're not getting through Star Trek: Discovery Season 3 without a new captain. Heck, who knows, maybe we'll get more than one.

Star Trek: Discovery Season 3 does not yet have a release date.

More like this
Entertainment
Jan. 30, 2023
The Last of Us Episode 3 Features One Subtle Video Game Easter Egg
By Alex Welch
Culture
Feb. 2, 2023
Buck Rogers in the 25th Century’s Most Baffling Change Also Gave Us Its Best Character
By Ryan Britt
Culture
Jan. 25, 2023
30 years later, Star Trek is about to pay off a massive villain comeback
By Ryan Britt
LEARN SOMETHING NEW EVERY DAY.
Related Tags
Share: