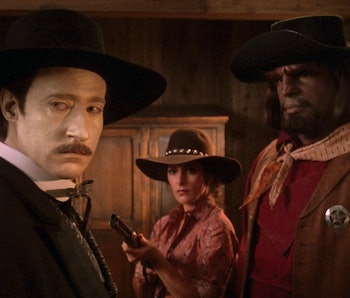 Broken holograms are scary again. Before The Matrix or Ready Player One, living inside of a complicated virtual computer program was a popular, and even classic, sci-fi trope. In 1967, the same year Harlan Ellison's "City on the Edge of Forever" debuted on Star Trek: The Original Series, he also published a chilling short story about people stuck inside a killer-computer program called "I Have No Mouth and I Must Scream." Since then, all of sci-fi, and Star Trek in particular, has been obsessed with intelligent holograms gone wild. But for the most part, in the era of Star Trek: The Next Generation and Star Trek: Voyager, these kinds of plotlines got a little... silly.

From a holographic Professor Moriarity trying to take over the ship in "Elementary, My Dear Data" to the crew of Voyager being forced into a corny Flash Gordon-esque black-and-white holo-simulation in "Bride of Chaotica," the Star Trek trope of a hologram program going bonkers is well-trodden and often mocked. But, in Star Trek: Discovery's new episode, "Su'Kal," the deadly seriousness of a malfunctioning holodeck actually makes sense, for the first time in quite a while. Star Trek: Discovery spoilers ahead.

Early in Discovery Season 3, Episode 11, Burnham, Culber, and Saru beam onto a crashed ship, only to find themselves totally transformed. Burnham appears to be a Trill, Culber has become Bajorian, and Saru...is human! Now, the tech here hasn't actually transformed the bodies of our crew into new species, but instead, created complex holographic fields to make them look that way. Under these holographic projections and forcefields, they're still the same people they used to be. But, this does physically change the way Saru is walking. If these are only holographic images, why does his walk change?

In The Next Generation, there was some inconsistency about whether or not you should get dressed up before entering a period-piece on the holodeck. For example, when Picard first ran his Dixon Hill private detective program in "The Big Goodbye," he realized he needed to go and get changed into the right clothes. Ditto for Data and Geordi when they pretended to be Sherlock Holmes and Dr. Watson, respectively. That said, by the time of First Contact, it seems like holodeck technology could whip-up a new set of clothes for you pretty quickly. When Lily and Picard attempt to hide on the holodeck within a different Dixon Hill mystery, Picard says "something in satin?" referring to the idea that the computer is going to make Lily a dress. Soon after that Picard and Lily are "wearing" the correct period-specific clothes from the 1940s nightclub scene.

All of this — combined with the fact that the holodeck technology in Discovery is at least eight-centuries more advanced than TNG — creates a fairly easy explanation for how and why the away team in "Su'Kal" is altered both physically and outwardly. In order for Culber to "appear" Bajorian in the holodeck simulation, those ridges on his noses would need to "feel" real. Ditto for Saru's walk. Some kind of complicated force-field is compensating for these differences in masses, and re-organizing all of that into what the characters see and feel. A short way of thinking about it is this: the Star Trek holodeck has always operated with some form of what VR tech refers to as "haptics." What happens in "Su'Kal" is an advanced version of that.

How Discovery made the holodeck trope realistic

For the most part, holodeck scenarios throughout most of '90s Trek represented a break from the drama. Even in First Contact, Picard, and Lily ducking into the holodeck is mostly there to give the audience a visual break for too much Borg stuff. When fans think of holodeck stories, they probably think of outright comedies like "A Fistful of Datas," in which a ton of holographic Datas try to kill Worf and Troi in a computer-simulated western. Imagine a comedy version of Westworld crossed withThe Matrix, and that's the silly TNG holodeck trope in a nutshell. (That episode is still better than many episodes of Westworld, but you get the point.)

But, with Discovery's "Su'Kal," the holodeck problems aren't a distraction or an outright comedy. This time, Star Trek is doing something thoughtful and bittersweet with this zany malfunctioning tech. By the end of the episode, we learn that the entire holographic environment was created for the titular Su'Kal, as a way of raising an orphaned child in the depths of space. It's a fun novelty to see Doug Jones' Saru as a "human," but there's a good in-universe reason for doing it. The "child" Su'Kal has no real concept of the outside world, meaning if he sees the away team in their true forms, he might freak out. And so, the computer assigned Culber, Burnham, and Saru different species to make everything more consistent with what Su'Kal would expect. Unlike Data playing every single character in an Old West saloon, this concept is played straight.

The plot of this episode of Discovery is clearly about isolation, loneliness, and how those factors can contribute to a loss of personal identity. The strange holographic choices made by the computer have good in-universe reasoning. But, these holographic misrepresentations of our heroes also reinforce the themes of the episode. Tilly is accused of being an imposter Starfleet captain. Adira is still struggling with their own new emergent identity as a joined Trill. And the series as a whole is trying to work out what the ideals of the Federation even mean in the harder-edged 32nd Century.

Giving Saru, Culber and Burnham some new gamer-like avatars makes a bigger statement than holographic shenanigans have in previous Treks. This isn't just high-tech dress-up anymore. In Discovery, figuring out personal identity is the story.

Star Trek: Discovery Season 3 has two episodes left. Both of those air over the next two Thursdays on CBS All Access.