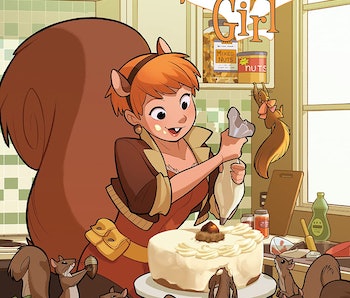 Before Ted Lasso, there was Squirrel Girl.

Back in 2017, Marvel started developing New Warriors, another Marvel superhero series centered on a team of young adults, with the cable network Freeform. Though the project never made it past the pilot stage and had been officially shuttered by 2019, showrunner Kevin Biegel (Cougar Town) is finally opening up about what was meant to be.

And, in his words, it was “very proudly gay” and aimed to “make the world better, even a little bit.”

On September 8, tweeting that he was feeling “frisky” and about to do something “uncouth,” Biegel took to Twitter and surprised his 15,000-plus followers with unseen, behind-the-scenes material from his unaired Marvel series New Warriors.

Based on the superhero team from Marvel Comics, New Warriors was to star an ensemble cast that included Werewolves Within actress Milana Vayntrub (best known as “Lily” from the AT&T commercials) as the show’s lead superhero Squirrel Girl. Many of Biegel’s tweets included glimpses of Vayntrub with castmates and in costume tests, during which she donned prosthetic squirrel ears and tails.

Though Biegel promised to not delete the tweets (his exact phrasing: “F-it, I’m not deleting shit”), the tweets have been deleted. But you can view screengrabs of Biegel’s tweets here, here, and here. A Twitter thread archiving all of Biegel’s material, which includes tests for animatronic squirrels and footage from the pilot, can be seen here.

Discussing the reason for the show’s cancellation, Biegel laid blame on New Warriors being “very very proudly gay” and alleged that a caps-lock “SINGULAR” individual executive canceled the series.

“Because it was too gay,” Biegel tweeted, calling the exec “a rich, straight, Brentwood turd.” Though he was resistant to name the person, Biegel added they “got fired for being vile at his company. We, on the other hand, live.”

Popular speculation on the identity of the exec points to former Marvel TV executive Jeph Loeb, who’s courted controversy for his alleged insensitivity. Biegel, however, said in a tweet (also deleted) that the “high level exec with an agenda situation” was not Loeb.

Regardless of who killed New Warriors, the show remains off television as an unaired pilot, which Biegel and Vayntrub expressed disappointment about. “It would’ve meant the world to us, too,” Biegel tweeted in response to a follower who said the show would have meant a lot to them.

“I loved her,” Milana tweeted.

Based on what Biegel and Vayntrub shared, New Warriors easily could have been Marvel’s contribution to the current wave of upbeat TV, most recently defined by Ted Lasso on Apple TV+. Though the Jason Sudeikis-led sitcom isn’t the only show out there powered by kindness — TV auteur Michael Schur cemented the tone with other big network hits like Parks & Recreation, Brooklyn Nine-Nine, and The Good Place, all of which predated Ted Lasso — a fully greenlit New Warriors would have arrived just in time to lighten moods and warm hearts during the pandemic.

The show would have also been welcome counterprogramming to everything else going on in the Marvel Cinematic Universe. Had New Warriors made it to air in 2018 as intended, it would have brought a little levity to the widespread sense of loss Marvel fans felt after Avengers: Infinity War.

Sharing a piece of the script in which a character talks about being a Black, queer hero for other kids to look up to, Biegel again expressed remorse that New Warriors never made it to air.

“I have nights where I can’t fall asleep because I get so mad we couldn’t have characters say stuff like this,” Biegel tweeted. “Sorry. Not sorry. #NewWarriors woulda been really great. I wish we could’ve given it to y’all.”

Since Biegel’s tweets, fans have called for New Warriors to be revived on Disney+. While that’s unlikely to happen, especially for a show audiences have literally never seen, fan campaigns have proved powerful in the past. Just today, the previously-canceled cult NBC series Zoey’s Extraordinary Playlist just received a revival at Roku.

Streaming is a strange world. The impossible can become real overnight, and sometimes it only takes a few tweets to make it happen.

There is no release date for New Warriors (for now).