Everything we know about 'Squid Game' Season 2 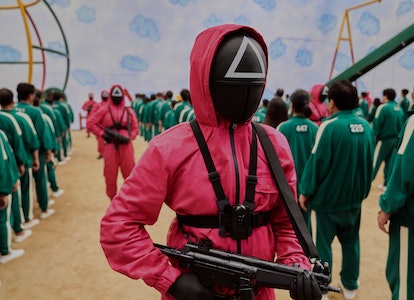 Netflix’s Top 10 is a strange animal.

Sometimes, a network drama that went unnoticed on broadcast television hits it big on Netflix, like You, which had aired an entire season on Lifetime before moving to the streamer. Other times, a canceled show gets a second life due to its popularity on Netflix, as was recently the case with NBC’s Manifest. Then, of course, there’s the kid’s show Cocomelon, which seems to occupy a permanent spot in the top 10.

Every so often, a show finds a following, makes its way onto the Top 10, then becomes even more popular as a result. It’s how we ended up with Tiger King; now, Squid Game is the surprise phenomenon du jour. But will we see more of this series? Here’s everything you need to know.

Has Squid Game been renewed for Season 2?

Netflix’s co-CEO and chief content officer Ted Sarandos confirmed Squid Game is getting a second season during a quarterly earnings interview in January 2022. Sarandos was asked about whether the popular Korean series would get a Season 2. “Absolutely,” he said. “The ‘Squid Game’ universe has just begun.”

Since Squid Game’s breakout premiere in 2021, there was an obvious demand for a second season. Considering the massive response, and the series’ open-ended epilogue, Season 2 seemed like an obvious next step. And now it’s officially happening.

When will Squid Game Season 2 be released?

There is no release date for Season 2 just yet, as it has recently been ordered. The lengthy pre-production process and complex production for a series like Squid Game mean that a possible Season 2 may not arrive until 2023.

That said, considering the high-octane action and emotion contained in this series, it’ll surely be worth the wait. If we can wait three years for another season of Stranger Things, we can wait for more Squid Game.

Is there a trailer for Squid Game Season 2 yet?

There isn’t a trailer for Season 2. Considering the huge following this series has, it may only be a matter of time until a release date announcement or teaser trailer is released. However, a full trailer for the next season probably won’t arrive until late 2022 or 2023.

Squid Game follows Seong Gi-hun, a down-on-his-luck father looking to resolve massive debts so he can provide a good life for his father. After calling a mysterious number, he finds himself chosen as the last of 456 players in the Squid Game, pitting people against each other in childish games with deadly stakes.

The series ends with Gi-hun winning the Squid Game. A year later, he’s summoned by Oh Il-nam, the eldest player of the Squid Game that Gi-hun conquered during a game of marbles. Il-nam explains the entire Squid Game was engineered by him to entertain the uber-rich, and that he was one of these VIPs. He used the game as a test of humanity’s innate goodness.

After one last test, which Gi-hun wins, Il-nam dies. Later, Gi-hun keeps the promises he made to other contestants in the Game and prepares to move to the United States with his daughter — but then he spots a game of ddakji, the same game he played to get an invite to the original Squid Game. He takes a card from the recruiter and calls the number.

By the end of the episode, fans know the original purpose of the game; perhaps now Gi-hun will attempt to take down the game from the inside.

More like this
Entertainment
Jan. 30, 2023
Doctor Who Could Become the New Marvel — But There's a Catch
By Ryan Britt
Entertainment
Jan. 22, 2023
The Last of Us Episode 2 trailer teases a big reveal
By Claire Fox
Culture
Feb. 2, 2023
Buck Rogers in the 25th Century’s Most Baffling Change Also Gave Us Its Best Character
By Ryan Britt
LEARN SOMETHING NEW EVERY DAY.

This article was originally published on Sep. 30, 2021