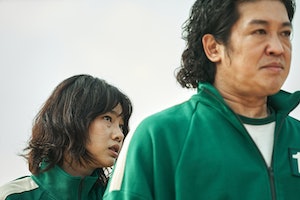 Squid Game is an addictive series. The #1 show in 90 different countries, it’s left viewers with one looming question — now that everyone’s binged it up to the final credits.

With no more Squid Game in sight, folks are asking, What do I watch next?

Though Netflix’s algorithm is built to answer that question, it usually just suggests international series from a shared country of origin. If you’re looking for a non-American series that captures the same dystopian magic of Squid Game, check out these 7 series, each epitomizing a different element of Squid Game’s appeal.

Watch if you liked: The premise of a giant, deadly game and mind tricks

Alice in Borderland is eerily similar to Squid Game. At its heart is a deadbeat young man who finds himself sucked into a giant game of survival and manipulation, which he must try to win while navigating interpersonal relationships and collaboration.

Though challenges take the form of kid’s games, as in Squid Game, both series involve protagonists coming up with ingenious workarounds for the difficult tasks before them.

Watch if you liked: An underdog story with sci-fi elements

Sweet Home, an adaptation of the RPG of the same name, follows a young man as he branches out and decides to live on his own for the first time, only to discover his apartment building is full of horrible monsters he must fight to survive.

The stakes are just as high as in Squid Game, but the tone is much more terrifying.

Watch if you liked: K-Drama qualities

Looking to really get into Korean television after Squid Game but don’t know where to start? Look no further than this K-Drama that includes the sci-fi futuristic tech and Powers-That-Be of Squid Game— with more of the traditional romance plotlines that make K-Dramas so delightful.

My Holo Love follows a young woman with face blindness who gains access to a prototype holographic personal assistant and falls in love with him. Imagine it like a K-Drama version of the movie Her.

Watch if you liked: Hunger Games-esque ideas of deadly games as entertainment

Based on a British series (see below), Reality Z establishes a fabulous premise: what if the zombie apocalypse happened outside the set of a reality show? An ensemble group on a reality show called Mount Olympus must fight for their lives and their reputations as they navigate what a brave new world means — even though they’re nothing but reality show contestants.

Watch if you liked: The deadly games, but didn’t like the language barrier

Before Charlie Brooker made Black Mirror, he made Dead Set. Since it was produced by the same production company as Big Brother, it’s best described as “Big Brother but make it zombies.” Real Big Brother host Davina McCall plays a zombified version of herself, and portions of the series were filmed on the actual Big Brother set.

If you’re looking for an international show without having to worry about subtitles or English dubbing, this British series is perfect.

Watch if you liked: The dark backstories and social satire

This series is definitely more horror than thriller, but its mystery and commentary aspects make it a great companion piece to Squid Game. For American audiences, Detention provides a great window into a little-known period of history: the White Terror period of Taiwanese history.

Watch if you liked: The sci-fi elements and ensemble cast

Yes, it’s complicated, but it’s just complicated enough to keep you engaged while awaiting news of a Season 2 of Squid Game.