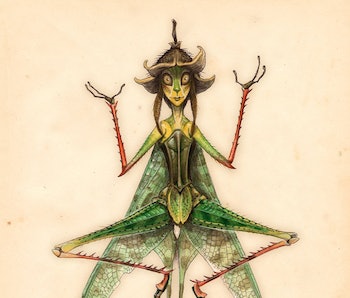 How has it already been two years? On November 12, the Disney+ streaming service marked its second anniversary with Disney Plus Day, a cavalcade of new announcements and fresh looks at eagerly anticipated upcoming projects. Among the event’s unexpected reveals was a new fantasy live-action series, The Spiderwick Chronicles. It’s based on the children’s book series of the same name, written by Tony DiTerlizzi and Holly Black.

While it’s still early days, we’re running down everything we know about the upcoming fantasy series so far. Let’s dive in!

Disney did not reveal an official premiere date for The Spiderwick Chronicles during the Disney Plus Day event on November 12. The announcement didn’t specify a particular year of release, either.

Given that we already know a fair bit about Disney+’s slate of programming for 2022 — like the Willow TV series, the live-action Pinocchio movie, and Hocus Pocus 2, it seems unlikely we’ll see this show hit the service until some time in 2023.

Disney has not yet revealed an official trailer for The Spiderwick Chronicles, instead sharing a tweet with images and key art inspired by the book series.

At this point, the live-action adaptation is in production, which likely means the series hasn’t started filming yet, and that the writing process is still in progress.

That said, if you’re curious to get a sense of what the show might be like, the series has been adapted to the screen once before, for a 2008 feature film from Paramount and Nickelodeon Movies. You can check out that trailer below.

Since this new adaptation of The Spiderwick Chronicles is still in early production, Disney did not reveal any details about the cast during its November 12 event.

The Grace children — twin brothers Simon and Jared, and their older sister Mallory — are the main characters of the book series. That means viewers can expect a trio of kids at the center of the Disney+ show.

The cast of the 2008 movie included Freddie Highmore, Sarah Bolger, Martin Short, Nick Nolte, and Seth Rogen. Will Seth Rogen take time away from his exciting new career as Donkey Kong to reprise his role? Almost certainly not, but you never know.

The Spiderwick Chronicles span five slender books, each clocking in at a little more than 100 pages. A sequel series, Beyond the Spiderwick Chronicles, spawned a further three novels. So if you’re looking to catch up before the live-action adaptation comes to Disney+, you’ve got plenty of time. This isn’t a Harry Potter or Dune-level literary undertaking.

The books kick off when the Grace family moves into a creepy old mansion and discover a realm of faeries that exists parallel to our own. On the first night, they discover a secret library — and an unexpected house guest living within their walls. After exploring the house further, the children discover Arthur Spiderwick's Field Guide to the Fantastical World Around You, a hand-written book by their great-great uncle, containing information on the many types of faeries living in the surrounding forest. Turns out, this field guide is far more dangerous than it seems at first glance.

If you enjoyed the Narnia series, Locke & Key, or His Dark Materials, The Spiderwick Chronicles might be right up your alley.

The Spiderwick Chronicles is in production at Disney+.