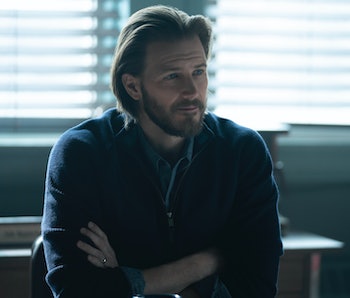 Locke & Key, Netflix's comic-inspired dark fantasy series, dropped its first 10-episode season on February 7. The story follows three siblings – Tyler, Kinsey, and Bode Locke – who move to their father's creepy old mansion shortly after his sudden death. As is customary in stories that incorporate the phrase "creepy old mansion," the kiddos soon discover that there's all sorts of supernatural tomfoolery afoot in their new abode. Their father, Rendell Locke, never spoke much about his childhood at Key House, and the trio quickly discovers why.

Rendell Locke worked as a guidance counselor in the high school attended by Tyler and Kinsey in Seattle. (In the comics, they're from San Francisco, which is no longer cool, I guess.) A troubled student, Sam Lesser, comes to the Locke home and shoots him. Before pulling the trigger, Sam insists Rendell has something he wants, but Mr. Locke refuses to budge.

This prompts the widow Locke and her three sprogs to move to Matheson, Massachusetts. (The town is called Lovecraft in the comics, and the showrunners wisely concluded this was a bit on-the-nose and opted for something more generic.)

Yeah, we know Sam shot Rendell. But why did he do it?

That's the tricky bit. The short answer is that a demon known as Dodge tricked Sam into doing killing Rendell because it wanted one of those magic keys.

Here's the longer explanation. When Rendell was a senior high school in 1988s, he and his pals weren't content to listen to bitchin' tunes from Rick Astley and Whitesnake while getting blasted on Bartles and Jaymes, as was the custom at the time. Instead, these rapscallions were tinkering with the occult.

Rendell shared the secrets of the Locke family with his pals, and they refer to themselves the Keepers of the Keys. The show doesn't delve deeply into their hijinks, which in the comics included staging a school production of The Tempest enhanced with magical pyrotechnics.

According to Locke & Key's "Riffle Rule," adults can't remember or access magic. To get around this, the Keepers decided to forge another key. To do so, they needed to open the Black Door and let out a demon, which they could transform into Whispering Iron. This very unwise plan was an immediate catastrophe, as a demon escaped and wreaked havoc.

That shape-shifting demon came to be known as Dodge, aka the woman in the well, the one who persuaded Sam to obtain the Anywhere Key, even if it meant murdering Rendell Locke. Dodge also convinced Sam that Tyler and Rendell hated him, which wasn't true.

What happened to the demon that escaped through the Black Door in 1988, and how did that become Dodge?

The evil entity took over Lucas' body in the blink of an eye. The name Dodge comes from Ellie's nickname for Lucas, as the two dated in high school.

While Demon Lucas was canny enough to act casual for a while, his friends suspected something was amiss when he woke them in the middle of the night and started demanding keys and murdering people. That's why Rendell murdered Lucas. The survivors made up a story that they'd been partying in an oceanside cave and their pals drowned, and split the keys amongst themselves, vowing to never use them again. Nina and the Locke kids only hear this story for the first time upon moving to Matheson; Rendell had never mentioned it before.

Ellie accidentally released Dodge when she used the Echo Key to communicate with Lucas after his death. It was kicking around the well ever since, until Sam and Bode got involved.

Wait, is Dodge more than one person?

Dodge is a demon, and doesn't have a body of its own, or a gender. By the end of Season 1 of Locke & Key, Dodge can transform their appearance at will. At various points, Dodge is the woman in the well, Lucas, Ellie, and Gabe. The person Tyler tossed into the Black Door in the season finale? That was actually Ellie, made to look like the woman in the well. Last we saw the Lockes, Kinsey's getting cosy with Gabe, who's actually a demon in disguise. Uh oh.

Season 1 of Locke & Key is available to stream now on Netflix.

More like this
Culture
Sep. 20, 2022
5 amazing sci-fi shows and movies leaving Netflix in September 2022
By Robin Bea
Entertainment
2 hours ago
A canon-shaking Star Trek crossover may have just happened — and nobody noticed
By Ryan Britt
Culture
Oct. 3, 2022
Netflix has the perfect sci-fi thriller to kick off your spooky season
By Jake Kleinman
Related Tags
Share: