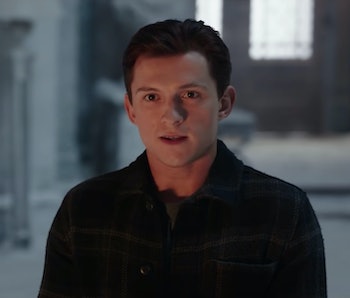 At the end of Spider-Man: No Way Home, Peter Parker (Tom Holland) is forced to fix his universe’s crumbling reality by letting Doctor Strange (Benedict Cumberbatch) cast a spell that results in everyone forgetting who he is. Consequently, the film’s final moments see Holland’s Peter Parker swinging through New York City, his anonymity restored in exchange for the erasure of all his personal relationships.

It’s a bittersweet final note, and it leaves Parker’s future in the Marvel Cinematic Universe in an odd place. What’s the point in any of the film’s biggest supporting characters returning if they don’t know who Peter Parker is?

Well, one clever new fan theory argues that there may still be one person in the MCU who does remember Holland’s Peter Parker.

The Theory — In a recent Reddit post, u/jrfoster01 theorized that Wong (Benedict Wong) may have been excluded from Doctor Strange’s spell. The user notes that Wong very pointedly tells Strange early in the film to “leave [him] out” of whatever he and Peter are planning to do, which is a moment that could come back around in an unexpected way.

Specifically, this theory argues that Strange may have left Wong out of not only his and Peter’s plans, but also the spell that he casts at the end of No Way Home. That would make Wong the only person in the MCU who, as far as we know, still knows who Peter Parker is.

Fortunately, Wong is the Sorcerer Supreme, which means he’s about as powerful a friend as Peter Parker could hope to have.

The Marvel Cinematic Wongverse — One of the few things that everyone seems to agree on when it comes to Spider-Man: No Way Home is that Marvel and Sony are going to find some way in one of its sequels to make certain characters remember Peter Parker. But how?

To this theory’s credit, making Wong’s request at the start of No Way Home the inadvertent reason why he still remembers Peter Parker is the kind of tongue-in-cheek twist that fits with Marvel’s brand of storytelling. And considering how much Marvel has recently invested in making Wong one of the more prominent members of the MCU, it doesn’t seem out of the question that he might have something to do with putting Peter Parker’s life back together.

It’s also worth noting that recent rumors have suggested that Doctor Strange in the Multiverse of Madness may include a cameo from at least one of the live-action Spider-Man actors. So if Wong really does still remember Peter Parker, that could provide a reason for Holland to appear in the upcoming Doctor Strange sequel.

The Inverse Analysis — At this point, there’s no way of knowing exactly how Marvel and Sony plan on solving the Peter Parker problem they created for themselves at the end of Spider-Man: No Way Home. But this theory feels as legitimate as just about any other that’s floating around online.

Now, Wong does know that Peter Parker is Spider-Man when No Way Home begins, which makes him one of the people whose memories would presumably have to be erased at the end of the film. However, the same is true for basically everyone in No Way Home, and we know that one of them is going to have to remember who Peter Parker is sooner or later. Why not let it be Wong?