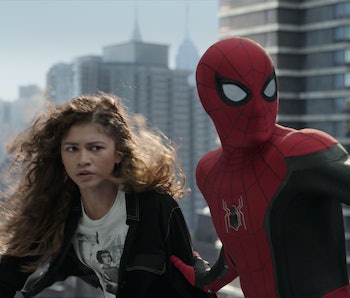 From its opening minutes, Spider-Man: No Way Home puts the relationship between Peter Parker (Tom Holland) and MJ (Zendaya) at the front of its story. The film follows the pair as they’re forced to endure public scrutiny and hardships on a level they haven’t before and, like many of the Spider-Man films before it, No Way Home ends on a bittersweet note for the couple.

With Peter willingly sacrificing his loved ones’ knowledge of his identity in order to save the entire multiverse, No Way Home’s final minutes see Holland’s friendly neighborhood web-slinger pay a visit to MJ, intent on reminding her who he is. However, when he sees how peaceful and fulfilling her life has become without him in it, Peter abandons his plans and leaves without bringing up their history together.

It’s a heartbreaking place for No Way Home to leave the couple, but two small details in the script suggest there may be more hope for MJ and Peter’s future than fans think.

A Moment of Recognition — The official script for Spider-Man: No Way Home has been made publicly available, and it contains some new insight into Peter and MJ’s final scene together. As was pointed out online by one keen-eyed Reddit user, the script version of the couple’s final conversation ends by noting that MJ watches Peter go with a “lingering sense of… recognition?”

Earlier in the scene, the script also notes that MJ experiences a moment of déjà vu when Peter recites her philosophy about disappointment back at her. Together, the two script beats imply that Peter’s interaction with her may have stirred more feelings within MJ than the film wants you to believe.

Peter & MJ’s Future Together — Considering how central both Tom Holland and Zendaya are to Marvel and Sony’s Spider-Man films, it probably shouldn’t come as much of a surprise that the odds are high they’ll be reunited in one of the inevitable No Way Home sequels. Whether their reunion happens in Holland’s next MCU adventure, however, remains to be seen.

But even if Marvel and Sony decide to hold off on putting Peter and MJ’s relationship back together, these moments in the No Way Home script open the door for the possibility that Doctor Strange’s (Benedict Cumberbatch) spell at the end of the film may not have been as effective as Peter thinks. At the very least, these beats suggest that MJ will remember her time spent with Peter before Strange’s spell.

And if MJ’s relationship with Peter is powerful enough to overcome the spell’s restrictions, then what’s to say the same thing couldn’t happen for some of the other major figures in Peter’s life? Like, say, Ned (Jacob Batalon) and Happy (Jon Favreau)?

The Inverse Analysis — Coming off the success of Spider-Man: No Way Home, Sony and Marvel have the opportunity to take their Tom Holland-led superhero franchise anywhere they want. But no matter where the franchise goes from here, No Way Home makes it clear that Peter and MJ’s relationship will continue to be a major part of the MCU’s Spider-Man films.

The No Way Home script just raises the possibility that it may be Zendaya’s MJ who ends up seeking out Holland’s Peter, not the other way around.

Spider-Man: No Way Home is playing in theaters now.