“The place that represents second chances” 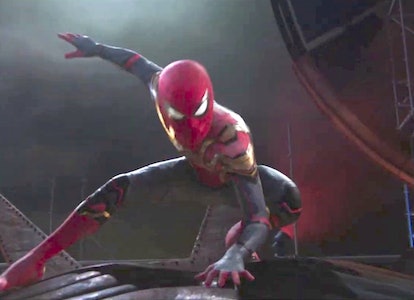 The Marvel Cinematic Universe has always been rife with symbolism. It’s what makes the Avengers so recognizable, from Iron Man’s arc reactor to Thor’s hammer. But the biggest symbol of all is Captain America’s shield, which represents far more than just the absent Steve Rogers. It’s a symbol of American hope and patriotism.

Spider-Man: No Way Home underlines this by showing post-Blip America’s decision to mount a giant Captain America shield on the Statue of Liberty, a decision that makes it look like two symbols stapled together. But by staging its final confrontation here, No Way Home adds nuance to this blunt moment.

These are two different views of America. One is the world’s caregiver, open to taking in the poor and huddled masses. The other is the world’s policeman, keeping the peace — or breaking it — at home and abroad. Connecting the two doesn’t seem to make much sense.

But Spider-Man (and Spider-Man and Spider-Man) fighting off a handful of villains on this new Statue bring these two visions together. Sure, it’s the least practical place for a fight. Electro can control electricity, so a copper statue covered in scaffolding isn’t a great venue for our heroes. And it’s an active construction site, so there’s plenty of sand for Sandman to control. But thematically, it’s perfect.

Peter Parker’s internal struggle has been between two different ideas of what a hero should be. The media is painting him as a murderer, a dangerous figure putting justice into his own hands. He wants to be a teen vigilante, but he also just wants to put that nonsense aside and go to MIT with his friends.

With the crack in the multiverse, Peter’s faced with another dilemma. He could try and help “cure” the villains, or he could banish them to their own universes to be defeated by their respective Spider-Man. But Spider-Man is like the Statue of Liberty. Just like his Aunt May before him, he believes in the good in people. The Green Goblin, Sandman, Electro... they’re his huddled masses.

In the aftermath of the fight, the shield falls and lands on Liberty Island for Green Goblin and Spider-Man to have their final confrontation on. Not only does the initial image of the Statue finally re-emerge, but the rest of the action literally takes place in the giant legacy left behind by Spider-Man’s mentors.

If it’s such a conflicting symbol, why did the America of the MCU choose to mount the shield on the Statue in the first place? Well, just as the Marvel franchise can’t resist an on-the-nose metaphor, the world inside the MCU loves to replace its heroes as quickly as possible. After John Walker failed as a successor and the world didn’t seem ready for Sam Wilson’s Captain America, a purely mythological figure like the Statue of Liberty couldn’t disappoint. It’s devoid of the human element, which is both a pro and a con.

Captain America’s absence was always going to leave a giant hole in the MCU. But Spider-Man: No Way Home used his legacy as a literal reminder of the massive pressure on Peter Parker, the push to try to do good in all endeavors. It takes a reference to a metaphorical being and a lost superhero, and posits them as ideological foes in Peter’s life. It’s not subtle, but that’s what the MCU loves to be.

Spider-Man: No Way Home is now playing in theaters.