'Spider-Man: No Way Home's Aunt May scene is the trilogy's smartest twist 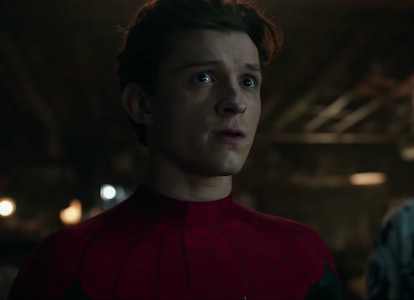 When we first meet Tom Holland’s Peter Parker in Captain America: Civil War, he’s already been bitten by a radioactive spider and is actively moonlighting as Spider-Man. Notably, while the moment is never shown, it’s referenced and confirmed that Peter’s uncle, Ben Parker, has already died as well.

As a result, many Marvel fans and comic book readers went into Holland’s first Spider-Man trilogy thinking that he’d already become the legendary web-slinger they knew from the comics. Spider-Man: No Way Home, however, reveals that Marvel and Sony have actually been telling a new version of Peter Parker’s origin story — one that began in Civil War and reaches its culmination in No Way Home’s second half.

In this retelling, it’s Marisa Tomei’s Aunt May who ultimately plays the biggest role in her nephew’s journey toward becoming the Spider-Man that comic book fans have loved for decades. But how does that change this classic origin story? And is it for better or for worse? Let’s dive in.

At the end of Spider-Man: No Way Home’s second act, Peter suffers a devastating loss: the death of his aunt at the hands of the Green Goblin (Willem Dafoe). Her death, understandably, sends Peter into an emotional tailspin that sees him nearly kill Dafoe’s Norman Osborn in retaliation — he’s stopped, thankfully, by Tobey Maguire’s Peter Parker).

But before she dies, May imparts some important words of wisdom to her nephew. She tells him that she doesn’t regret trying to help Norman and the film’s other multiversal villains, and urges him to hold onto his empathy — even for his most dangerous and villainous of enemies. “With great power, there must also come great responsibility,” May tells him, just moments before collapsing onto the floor.

Follow all of Inverse’s Spider-Man coverage at our No Way Home hub.

It’s a heartbreaking scene, one that greatly informs Peter’s arc through the rest of the film — he resolves to “cure” No Way Home’s villains in honor of May — and helps him bond with Maguire and Andrew Garfield’s Spider-Men. It’s also the moment that cements Tomei’s Aunt May as the figure whose death teaches Holland’s Peter Parker, once and for all, about the responsibility he must carry as a superhero, as well as the sacrifices he must make in order to continue being one.

In other words, No Way Home gives Aunt May the same role in the MCU that Uncle Ben traditionally filled in both the comics and Sony’s previous Spider-Man film franchises.

On its own, May’s death scene is extremely effective. Not only do Tom Holland and Marisa Tomei play all the emotions of the scene beautifully, but May’s death also benefits from something that the Uncle Ben scenes in previous Spider-Man movies haven’t had: time.

Given the role his death typically plays in Peter’s origin story, Uncle Ben always has to meet his demise in the first half of whatever Spider-Man movie he’s introduced in. The Tobey Maguire and Andrew Garfield films can’t spend as much time building up Uncle Ben and Peter’s bond, for instance, because Ben has to die quickly in order to complete Peter’s Spider-Man transformation.

By introducing Holland’s Peter Parker after both his spider bite and Uncle Ben’s death, Marvel and Sony bought themselves the chance to really explore the relationship between him and the person whose death ultimately shapes him the most.

In this case, that’s Marisa Tomei’s Aunt May, whose death in No Way Home hits harder than any of the Uncle Ben death scenes in previous Spider-Man movies precisely because of how much time we’ve had to become invested in her and Peter’s relationship. Homecoming, Far From Home, and No Way Home’s gradual and subtle positioning of May as Peter’s moral center also makes her delivery of the “with great power…” line feel like an organic, satisfying, and cathartic moment when it comes.

The Inverse Analysis — Marvel fans will, no doubt, have a number of varying opinions about how No Way Home serves as the surprise conclusion to an origin story they likely didn’t even know they were watching. Knowing that Holland’s Peter Parker isn’t really Spider-Man until the end of No Way Home doesn’t really erase some of the issues with the way the character behaves in Homecoming and Far From Home either.

But after two films in which Holland’s Spider-Man essentially avoids facing any serious consequences for his many reckless actions, it’s nice to see No Way Home finally force him to understand the weight of his decisions. Aunt May’s death is central to that aspect of the film and it works surprisingly well.

By making Tomei’s Aunt May the Uncle Ben figure for Tom Holland’s Peter Parker, Marvel and Sony have pulled off one of their most surprisingly subversive and emotionally effective twists to date. Now, all that remains to be seen is how the two studios plan on continuing to remix established Spider-Man lore in their future collaborations together.

Spider-Man: No Way Home is playing in theaters now.