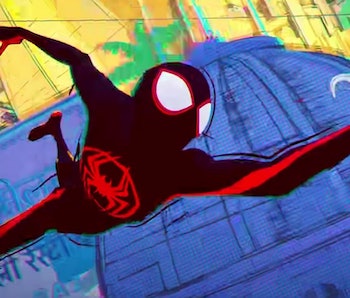 Spider-Man: Into the Spider-Verse found a hole in the most crowded genre out there: Superhero stories. Years before the Marvel Cinematic Universe was even thinking about variants and the multiverse, the Sony Animation film showed just how diverse your friendly neighborhood Spider-Man could be by introducing versions of the character ranging from the noir to the porcine, all portrayed in cutting-edge animation that blended 3D imagery with classic 2D elements.

Four years later, Sony is diving back into the Spider-Verse, and we have our first in-depth look at where the story can go next.

Today, Sony Pictures released a new trailer for Spider-Man: Across the Spider-Verse, highlighting Miles Morales as he and Gwen discover a threat posed by other Spider-People. At Cinema Con earlier this year, it was announced that the film boasts the largest crew ever assembled for an animated movie, which is impressive considering its predecessor had 177 animators alone. The movie also apparently includes 240 characters and “at least” six different universes, some of which you can see in the trailer below.

The trailer focuses on a speech Rio Morales gives to her son Miles about keeping himself safe, prefaced with a dive back into the Spider-Verse, where Miles is confronted with several Spider-Man variants brawling with each other. Is this our first look at a Spider-Man civil war?

In the last moments of the trailer, Gwen says, “We’re supposed to be the good guys,” and an unidentified voice responds, “We are.” It seems like these alternate Spider-people will turn on each other and join factions. There are some familiar faces amid the chaos: Fans have already spotted the infamous Bag-Man, and what looks like Miles Morales’ suit from the Spider-Man: Miles Morales game.

The film was previously titled Across the Spider-Verse (Part One), but the parenthetical was dropped when the third film in the series was retitled Beyond the Spider-Verse. Across is slated for release on June 2, 2023, with Beyond hitting theaters on March 29, 2024. Intriguingly, that’s a month after the release of another Sony Spider-Man movie, Madame Web starring Dakota Johnson.

If this trailer is any indication, the Sony Spiderverse is getting bigger and more complicated, but that’s a challenge the franchise appears to be up for. The innovative story, paired with the retro-futuristic visuals, makes it look like each new step into the Spider-Verse will be just as great as the first.

Spider-Man: Across the Spider-Verse will hit theaters June 2, 2023.