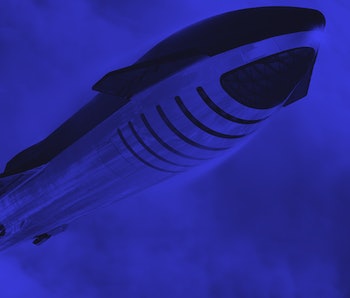 In an unusual move, the U.S. Federal Aviation Administration has given Elon Musk’s rocket company SpaceX tentative approval for three more tests of its Starship spacecraft.

The upcoming SN15 test could happen as soon as this week, as the FAA says an inspector has already been sent to the SpaceX Boca Chica launch site. The future approvals of SN16 and SN17 tests hinge on a successful SN15 flight, and the regulator warns that “mishaps” might require corrective safety actions from SpaceX.

The approval is atypical because the FAA had previously approved SpaceX tests one at a time, as regulators have been critical of SpaceX’s testing practices. The FAA had previously called out Musk for launching the Starship SN8 test in December 2020 without a proper license. That test exploded, though it was uncrewed and no property damage was found.

But this time, the FAA says that it has approved the tests in bulk because SpaceX played by the rules, and followed the FAA risk calculations needed to obtain approval. SpaceX is also only making slight changes to the designs over the next few tests.

“The FAA has authorized the next three launches of the SpaceX Starship prototype,” the government organization said in an official statement. “The agency approved multiple launches because SpaceX is making few changes to the launch vehicle and relied on the FAA’s approved methodology to calculate the risk to the public. The FAA authorized the launches on Wednesday, April 28.

There’s also another factor that might have come into play: SpaceX just won a $2.89 billion contract from NASA to use the Starship as a Moon lander. This means that NASA’s entire Artemis mission of landing the next generation of Americans on the Moon now rests in the success of SpaceX’s Starship.

While SpaceX has won the contract, none of its Starship prototypes have survived their tests so far. The closest attempt, the SN10 test, exploded minutes after landing. NASA likely prefers that the Starship stay intact during the entirety of the Artemis mission.

This new pressure to complete the Starship might pressure Musk to play by NASA and the FAA’s rules. Scrutiny is especially high, since the two other aerospace companies competing for the Moon lander contract, Blue Origin and Dynetics, are protesting the contract award.

“In NASA’s own words, it has made a ‘high risk’ selection,” Blue Origin told SpaceNews.

How SpaceX is changing Starship

But for now, the contract has been awarded and tests continue. The upgraded SN15 has been outfitted with upgraded Raptor engines, which have been test fired twice in 24 hours. The SN15 also features other upgrades, like an external methane manifold and hundreds more heat shield tiles, as noticed by space education YouTube channel Scientia Plus. And with the FAA inspector on site and Musk tweeting that the launch is set for this week, its likely all barriers have been removed for the test.

For the tests after this week, SpaceX hasn’t announced what changes are being made on the SN16 and SN17 rockets, but the SN16 is already being assembled at the facility in Boca Chica.

More like this
Science
8.12.2022 10:00 AM
45 years ago, the first Space Shuttle made history without going to space
By Allie Hutchison
Science
8.5.2022 12:15 PM
10 years ago, the Curiosity rover arrived on Mars — and revolutionized the hunt for alien life
By Allie Hutchison
Innovation
8.11.2022 11:00 AM
“Quantum materials” could give the human brain a run for its money, scientists say
By Nathaniel Scharping
Related Tags
Share: