“I was trying to make a deeply romantic movie.” 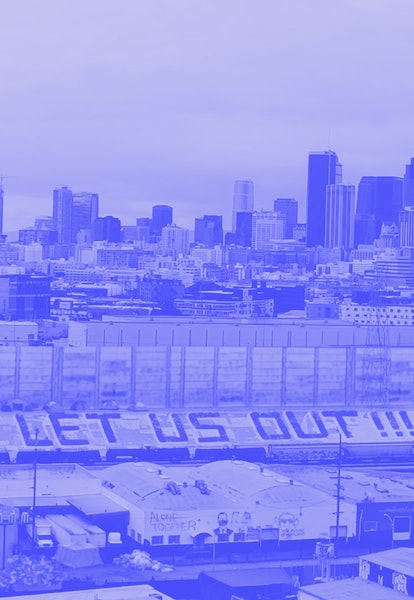 On October 29, 2020, the internet collectively uttered two words: “Too soon.”

That day marked the release of the first trailer for Songbird, a dystopian thriller set four years into a future where lockdown continues and the coronavirus has mutated into an even deadlier “Covid-23.” Directed and co-written by the indie director Adam Mason and elevated into the spotlight by producer Michael Bay, Songbird immediately set off concern.

Now that the movie has arrived, it seems those concerns were warranted. Songbird has a Rotten Tomatoes critics score of 12 percent, and an only slightly better audience score of 34 percent. The reviews say it “sucks” and will “make you sick.” The main criticism is that it's bland, boring "pandemic-sploitation" with a muddled message about life during quarantine.

But Mason doesn’t see it that way. He tells Inverse that he set out to make a timeless love story set against the backdrop of an “invisible monster,” not a politically-charged parable about the world today.

So what went wrong? According to Mason, the answer is that nothing went wrong. Speaking on the phone a few days before SongBird’s release, he was confident audiences would embrace his movie. But the real answer may be a little more obvious: Michael Bay got involved.

“The movie was incredibly low budget,” Mason says, “but working with Michael, he brought that kind of blockbuster sensibility to it.”

Bay’s involvement included shooting several scenes and then editing the 146-page script Mason had filmed into a tight 90 minutes. It’s unclear how much of Songbird’s socio-political message comes from Bay, but it’s no secret that he’s injected Conservative ideals in his own movies in the past.

Mason maintains that he “wasn't in any way trying to make a political movie,” but the movie speaks for itself. In the interview below, he also discusses how Songbird came to be in the first place, how Michael Bay got involved, and the message Mason hopes audiences actually take from his already-controversial film.

INVERSE: I’ve been fascinated by this movie ever since the trailer, which a lot of people reacted badly to. Do you think this movie is coming out too soon?

ADAM MASON: I kind of understood that, especially from the trailer. Did you watch the movie?

I think you'll agree that the movie is quite different from the trailer. The trailer was presented as almost like a horror movie, whereas the movie itself is much more of a romantic film at its heart. Ultimately, I was trying to make a very hopeful, almost cathartic story about the good side of people as opposed to the bad.

Let me backtrack a little bit. Basically, I was trying to make a deeply romantic movie that was set on the canvas of a pandemic. The movie is not really about the pandemic, so much as the love story between these two characters who want to be together, but can't.

So you think the movie misrepresented the trailer. How did that happen? Was there a debate over the trailer?

No, I wasn't really involved in the trailer. So I was really just focusing on the movie itself, which was made in an incredibly truncated fashion. So yeah, I don’t really have anything to say about it.

“The world that we're living in now is more dystopian than the world of the movie.”

We actually started in June.

June was a low point for the rate of infections and deaths, but even then scientists were warning that the coronavirus could get worse in the winter. Now it seems they were right. Were you thinking about that while making SongBird?

I mean, the movie itself is really a science fiction movie that’s set years in the future. But that said, a lot of the things that we were writing ended up happening while we were writing them.

For example, there was a moment where Simon Boyes, my writing partner, and I were discussing how dystopian we wanted the movie to be in terms of the world it was set in. And one of the things we were talking about was whether or not there should be a curfew in the movie. We were debating that it felt kind of overly dystopian, and then the same day I was writing that into the script, there were helicopters flying over my house announcing the curfew.

So in many ways, the world that we're living in now is more dystopian than the world of the movie, which is, in a lot of ways, a sweeter place than where we are today.

Michael Bay is listed as a producer on Songbird. How involved was he?

The movie was conceived on the second day of lockdown. Originally, we were going to do it as a more of a monster movie kind of akin to Cloverfield or something. But it evolved over a couple of weeks. Michael Bay came on board very early on. And then was very involved during the filming of the movie. He was on set for several days, he actually filmed several parts of the movie. And then he was heavily involved in post-production.

Which scenes did he film? Was it the stuff with the drone?

Michael spent a couple of days on set with us, and filmed a lot of the scenes involving the motorbike. He was also heavily involved with the action scene in the warehouse section of the film. He wasn’t involved in any of the drone scenes, although he helped us craft them significantly in the edit. A lot of the drone stuff I shot myself with my $900 DJI drone.

“It was really fascinating for me going through the Michael Bay Film School.”

So he was pretty involved?

He was extremely involved. Very, very involved, particularly in post, which was quite an extraordinary experience for me.

Yeah, it was interesting. I mean, the script that I filmed was 146 pages long. So the first cut of the movie is two-and-a-half hours long and was much more of a kind of character piece, I would say, almost like an indie movie in its sensibility. And it was really fascinating for me going through the Michael Bay Film School of watching how he makes his movies.

I mean, the movie was incredibly low budget, but working with Michael, he brought that kind of blockbuster sensibility to it. So it was really fascinating for me to be involved.

So Songbird was originally more of a monster movie? Do you have any doubts now about whether it should have stayed that way as opposed to being about the coronavirus?

No, no, not at all. It evolved away from being a monster movie because the idea of this kind of invisible monster was more powerful to me. A monster that you can't see, as opposed to a 200-foot Godzilla-type thing. So yeah, the movie evolved very organically from the initial concept into what we filmed, and then through the post-production.

The Sanitation Department plotline in the film presents this idea that in a pandemic dystopian situation, the government is not trustworthy. Was that your intention?

I mean, the point I was trying to get across with Harland, the Peter Stormare character in the movie, is that, essentially, he's running the department by default. There isn't really, intentionally anyway, a plot of government corruption within the movie, I wasn't in any way trying to make a political movie.

Sure, I get that, but once the movie is released, you’re not in total control of the message, right? Do you ever worry that maybe the message of the film is a little irresponsible at this moment in time?

No, not at all. I was just trying to make a movie that was kind of cathartic and hopeful. It was a kind of deeply personal message that I was writing, it wasn't written in any way as a cynical piece of work.

“It wasn't written in any way as a cynical piece of work.”

I'm an Englishman who's living in America. I’m 6000 miles away from my parents. Those were the things that I was thinking about when the lockdown hit. It's about the kind of isolation away from loved ones, and those enforced barriers between myself and the people I cared about. It was feelings like that inspired me. It was books like Love in a Time of Cholera. It was classic war movies that really just sit on the canvas of the war.

It's true the movie ends on a hopeful note. How realistic do you think that is?

I think where we stand at the end of 2020, we're in a very hopeful place in terms of how things are panning out, you know, with the vaccine. My father is 85 years old in England, and they've started administering the vaccine this week.

I'm not American. I'm not from this country. I just live here. I'm married to an American, and I have American kids. So I feel a great affinity and love towards this country. I think, although we've been through an incredibly dark time, there's a lot to be very optimistic about right now.

Are you hopeful that once people see this movie, they'll understand that it's not what the trailer presented?

Obviously, yeah. I mean, that's been nice. I would say 99% of the feedback I've had has been, yes, that comes across very strongly. So yes, that would be my absolute hope.

SongBird is available now on video-on-demand.