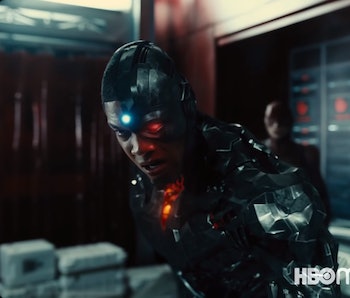 One of the most baffling things about the DC Universe isn't a comic book reboot. It's the price tag for necessary reshoots of the 2017 superhero movie Justice League, coming to HBO Max as Zack Snyder's Justice League.

After a summer where movies like Mulan and Tenet (both released under drastically different methods) barely broke even coming out in the Covid-19 pandemic, one can't help but speculate on the wild decision-making behind the director's cut of a 2017 movie — and how it factors into the big picture for the DC cinematic franchise.

In other words: There must be more to the DC franchise if WarnerMedia is willing to spend oodles of money to redo a three-year-old movie that wasn't popular (40% on Rotten Tomatoes) to begin with. But what is it?

What Happened? — On Wednesday, both The Hollywood Reporter and The Wrap reported on October reshoots for Zack Snyder's Justice League. THR reported that many of the Justice League actors, including Ben Affleck and Ray Fisher will return. Fisher recently made claims about an "unprofessional" work environment on the first Justice League reshoots with Joss Whedon (claims that WarnerMedia has publicly denied).

TheWrap reported the approximate cost for the reshoots, which is $70 million.

When the "Snyder Cut" was first confirmed earlier this summer, there was no mention of reshoots. Instead, Snyder would rely on his hours of unused material — plus some new special effects and voice recordings — to turn Justice League into a miniseries. (Snyder also made it clear his version of the movie would not use anything shot by Joss Whedon, who took over as director during a reportedly tense and "unprofessional" reshoot.) The cost was also reported to be in the "range" of $20-$30 million, per THR's reporting.

Obviously, plans have changed. But why?

What this means for the DCEU — For a special effects-heavy superhero movie, it's not that surprising the reshoots for Justice League cost $70 million. It also supports my own theory that the "Snyder Cut" needed a totally new ending, as Snyder's initial vision called for a two-part Justice League movie. That means even the "Snyder Cut" would end on a cliffhanger to lead into Justice League Part Two. In an alternate timeline where Zack Snyder shot and released Justice League exactly how he intended, the sequel would have opened in 2019.

Paying actors and building new sets and finalizing VFX and I guess writing a new ending, all during a pandemic? Yeah, that's $70 million. It's also really expensive, especially for a movie audiences presumably won't have to pay extra for like Disney's Mulan, which cost $30 in addition to a Disney+ subscription. Instead, a single subscription to HBO Max — currently discounted at $12 per month — is all one needs to watch the Snyder Cut.

The economics simply don't seem to shake out. If even the Disney+ "Premier Access" release of Mulan proved to be unfruitful, how much worse will Snyder's Justice League end up? Though the fan base for the Snyder Cut made a huge noise on social media for years, trending on Twitter isn't a meaningful measurement of commercial potential. There are hordes of other fandoms, some older than the Snyder Cut, who get movies that under-perform. The same year Justice League opened in theaters, Power Rangers, based on the nearly 30-year-old franchise, similarly opened with a thud. A year before that, Star Trek Beyond failed to recoup costs for Paramount. And unlike either Justice League or Power Rangers, Star Trek actually had a very enthusiastic reception.

But Justice League does play a part in the growing and evolving DC cinematic franchise, which has a number of new movies in the pipeline. Movies like The Flash, The Suicide Squad, Wonder Woman 1984, Shazam: Fury of the Gods, and Black Adam. While it's unclear how these movies will tie into Justice League specifically, if at all — conversations about continuity with the Snyder Cut are even more complex — it's still possible the Snyder Cut will factor into the DCEU's future if Warner is willing to pay a whopping seventy million dollars.

As the DCEU veers into DC's multiverse, it's totally plausible that the Snyder-verse could become its own franchise, with characters crossing back and forth between the realities of Joss Whedon and Zack Snyder's visions — not to mention other dimensions from the Tim Burton movies to the Arrowverse. If the multiverse really is DC's future, Warner's $70 million dollar bet on a director's cut starts to make at least a little more sense.

The Inverse Analysis — It's hard to see through the opaque messaging of Warner's aims for the DC franchise. To a casual observer, they're just making movies. But most superhero movies don't have a $70 million reshoot three years after it was released, for a streaming service with memberships that cost less than the average movie ticket.

A year away from release and the Snyder Cut is already a fascinating case study of the Hollywood business. In spite of logic and reason, Zack Snyder's Justice League is being made through sheer force of will and oodles of money coming from somewhere; the swallowing of WarnerMedia by telecom giant AT&T has resulted in lots of mergers, and lots of laid-off workers.

How the "Snyder Cut" will change the DCEU is something fans are looking forward to finding out. Whether it was worth all it took to get there will be a different matter entirely.

Zack Snyder's Justice League will be released on HBO Max on September 5, 2021.