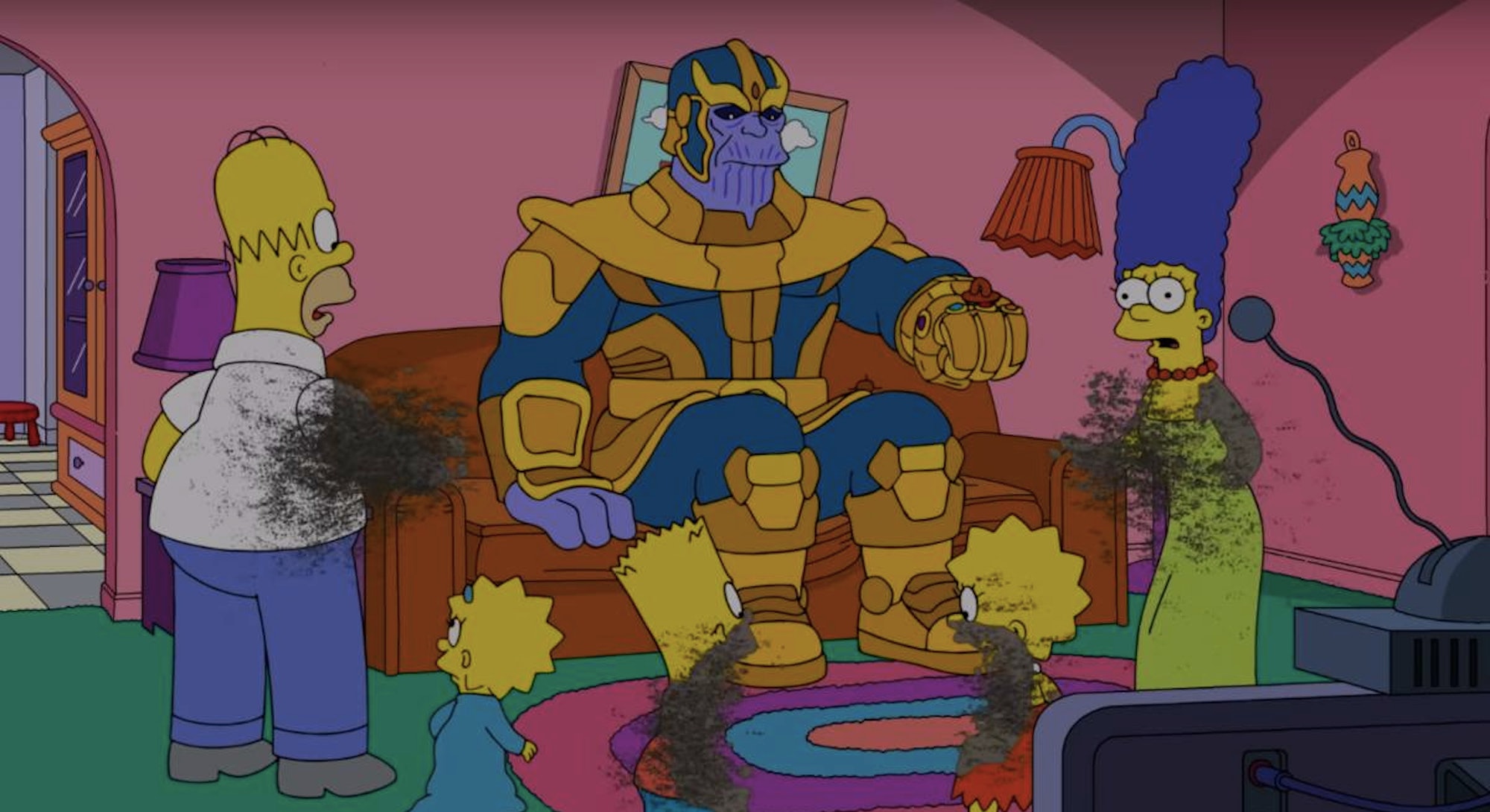 The Simpsons are going to Wakanda!

Well, not actually. Or at least, not yet.

Ever since Disney bought 20th Century Fox, The Simpsons has been the smiling face of that monopolistic corporate synergy. The long-running series was a key Disney+ offering at launch — despite some questionable cropping — and we’ve already seen at least one member of the Simpsons clan interact with the Star Wars universe.

So will the Simpsons make a trip to the Marvel Cinematic Universe next? According to Simpsons co-executive producer Michael Price, it’s very possible.

"They don't really give us notes in terms of what not to talk about, and I don't think we're doing more Disney references than before,” Price tells Inverse. “But we certainly have the opportunity now to do more experimental crossover with the shorts. Just as we've just done the Star Wars short, we can explore more tie-ins with Disney properties like Pixar or Marvel."

Price is an animation veteran who’s written over 20 episodes of The Simpsons. He also served as a script consultant on The Simpsons Movie and co-created his own animated series with Bill Burr in Netflix’s F is For Family, which he says will return for a fifth and final season later this year.

“Netflix basically told us that, assuming we meet certain deadlines, they'd want us to be out in-or-around Thanksgiving this year,” Price says.

In an interview with Inverse, Price discusses what it’s like working on The Simpsons in 2021, why Disney told him not to overuse Baby Yoda in his Star Wars crossover, and why F is for Family is different from The Simpsons.

Every time a new Simpsons episode comes out, someone brings up how the show isn’t the same as it was 20 years ago. Does that weigh on the writers?

It is definitely something that weighs on us, if only because we are also huge fans of those early seasons, and there certainly is a lot of expectation from fans, but we don't really spend time thinking about it when writing new episodes. We are not trying to replicate them but to continue telling new stories with these characters.

“I guess we are still doing something right.”

It's just bound to happen when a show goes on for so long. But even after 32 seasons, the show is still popular, so I guess we are still doing something right.

Is that longevity the key to more experimental episodes, like the non-Treehouse of Horror horror episodes?

Yes, the show is now so familiar to audiences that it allows us to experiment with the formula a bit. [Producer Matt Selman] came on one day and suggested we do a Halloween episode that was not a part of our annual Treehouse of Horror, because at this point, why not? We also did a horror episode that was just centered around Thanksgiving, which was a lot of fun.

One episode we just finished working on is also meant to be sort of non-canon, or at least more self-contained than usual. It's about binge-watching, and the citizens of Springfield getting hooked on crime shows. It's very much inspired by Fargo and crime documentaries on Netflix.

One thing we definitely can do, because the show is such an institution is reference ourselves. We break the fourth wall a bit more, and it's largely thanks to all the Simpsons memes. A few years ago, a younger writer, Cesar Mazariegos, came in during his first week and pitched the idea of having the “Homer backing into the bushes” meme during an episode, and it made it in. During [Season 30 episode "The Girl on the Bus,"] Homer is texting Lisa and he sends a GIF of the meme.

Whenever I read an interview with a Simpsons writer, they always seem surprised by which jokes or gags leave a lasting impression on audiences.

That is definitely true. You simply never know. It's the same with the Simpsons predictions. If it happens you go, "Oh, well, that's another one." But it's always weird for us. Of course, the biggest one of all still is the Trump thing.

I wasn't around for that episode but, even then, when you think about it, the fact that The Simpsons were joking 20 years ago about Trump being president, and that he was a terrible president that left the United States’ economy in bad shape, is what makes it weirder and funny. Because it was a joke that you could have made at the time. Trump was already talking about wanting to run for president, so it wasn't out of the realm of possibility to imagine him running – or that a TV show would consider that hilarious.

I think it's less about The Simpsons predicting something, and more about the world making a horrible and hilarious joke a reality. That's on the world. That's not on The Simpsons.

“Their only big note was not to overuse Grogu. Other than that, they pretty much left us alone.”

You worked as a script consultant on The Simpsons Movie. Have there been any recent conversations about a sequel?

That is above my pay grade. If they have those talks, they would not include me. That said, there definitely have been conversations. One thing about the movie is that it was a grueling experience for us because it was the same team making the show and the movie simultaneously. It was very hard on everyone.

In the years since The Simpsons Movie, have there been any episodes you’d considered turning into a script for that film’s sequel?

A few episodes over the past few years were written as episodes, but then at one point or another — once the episode was written — someone said, "Wow, we can take this and maybe expand it to make it the next movie." We would hold onto those scripts for a little bit, in case it [could be] a movie. But then we’d get an answer on whether we'd move forward with the movie. So far, we still haven't got a yes. [laughs]

Has making Star Wars shorts for Disney been as arduous as balancing the TV series and film?

That was still hard, but not as arduous. The Star Wars short was an idea [original Simpsons producer James L. Brooks] came up with in January: to do a series of shorts that allowed us to interact with other Disney+ franchises. [Simpsons showrunner] Al Jean thought of it being centered on Star Wars, which we thought was fun. And then the folks at Disney liked the idea, but they told us, "Why don't we make that ready to go by May the 4th, for Star Wars Day?" And that is not very fun at all. It's a tight schedule.

Al Jean brought me and [writer] Joel H. Cohen along. On some days we would be working on the show, but then Al would tell us to spend an hour talking about the Star Wars show until we had a script that we were happy with. The people at Lucasfilm gave us some notes and suggestions on the lore side of things. Their only big note was not to overuse Grogu. Other than that, they pretty much left us alone.

What can you tell me about working on F is For Family? I can imagine the more serialized format offers a different experience compared to The Simpsons.

Oh, it definitely does. I love the show so much. It's very personal to me and Bill. We're able to draw a lot more from personal experience. It's just a different style of comedy.

When we first pitched the show, we tried selling it around as more of a Simpsons-style sitcom. It was when Netflix came on board that they asked us to make it more serialized because it helps the binge-watching model. That style took a little while to get used to, but it is incredibly fun. Bill Burr is a phenomenal comedian, but his style is more from standup, more observational, compared to sitcom jokes. We go back and forth in blending the two styles.

F is For Family’s fifth season is its last. Did you guys make that decision, or...?

We actually didn't. Netflix came to us after the end of the fourth season to say they wanted to pick us up for a fifth, and final, season. They have been very great to us, but that's part of Netflix's model, and we have a great conclusion to our story coming.

“We have a Thanksgiving episode, and our final episode is set on Christmas Day.”

When is the season coming out?

We're still in the middle of production. We're getting some of the episodes back from the animation team. This season picks up almost right after the end of the last, which was set around Halloween, and this season takes place around the holidays. We have a Thanksgiving episode, and our final episode is set on Christmas Day... Netflix basically told us that, assuming we meet certain deadlines, they'd want us to be out in-or-around Thanksgiving this year.