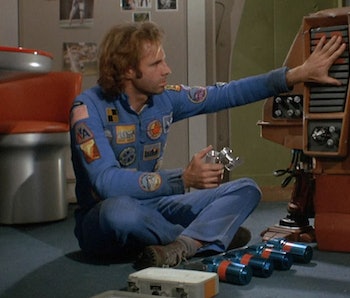 Back in 1972, while the seeds of the modern environmental movement were starting to take root, a sci-fi movie called Silent Running arrived. The emotional elements of this intriguing space film had a seismic impact on viewers of a certain age, one that still resonates in today’s time of climate change.

Directed by Douglas Trumbull, the special effects wizard behind 2001: A Space Odyssey, Blade Runner, and Close Encounters of the Third Kind, Silent Running was a revelatory experience for audiences. Trumbull, who passed away on February 7, 2022, bestowed a quiet grace on the serious subject matter of American Airlines Space Freighters acting as giant greenhouses to protect the flora and fauna of a post-apocalyptic Earth.

This was the Academy Award-winning SFX master’s directorial debut, and the results remain as poignant now as they were half a century ago. Images of a sacred fleet of commercial starships hovering in the black void, parked just outside Saturn’s orbit until our polluted planet is deemed safe again, are as indelible as anything the genre has offered.

Silent Running was released on March 10, in the no-man’s land of Hollywood scheduling, and starred Bruce Dern, Cliff Potts, Ron Rifkin, and Jesse Vint as a team of astronauts aboard the Valley Forge, a gargantuan space conservatory for Earth’s plants, trees, and flowers. As custodians of life now considered unfit to survive on Earth, their job is to monitor and cultivate the biospheres while scientists back home try to clean things up so the plant life can safely be reforested.

Dern, in a performance among his best, plays the sensitive botanist Freeman Lowell, who’s spent eight years tending to diverse species of plants and small animals. When orders arrive to abandon the project and destroy the geodesic domes that harbor the plants, Lowell refuses and resorts to murder to save the last remaining greenhouse.

With the aid of three drones affectionately called Huey, Dewey, and Louie, Lowell stages a fake explosion to cover his tracks and plots an escape course through the rings of Saturn. He gets away, at least for the moment, but keeping his terrarium alive in the depths of space becomes harder and harder, and the film becomes a study of how far Lowell will go for the plant life.

“I had never directed a live-action film before in my life,” Trumbull said in Mark Kermode’s 2014 book about Silent Running. “I really didn’t know anything about screen direction, about master shots, that sort of thing. But Chuck Wheeler, who was such a great cinematographer, was incredibly helpful to me, as was Harry Sundby, who was the lighting gaffer. They basically trained me how to shoot… I mean, this was really my film school, and they were wonderful with me.”

Screenplay duties went to Deric Washburn, The Deer Hunter’s Michael Cimino, and Steven Bochco of NYPD Blue and Hill Street Blues fame. It’s a short film, barely clocking in at 87 minutes, but it delivers a sentimental cautionary tale, a reminder of our planet’s fragility, and a triumph of the spirit.

For pre-CGI special effects on a low budget, Silent Running is impressive. Spaceship interiors were shot inside the USS Valley Forge, a mothballed aircraft carrier. For the lush forest sets, Trumbull conjured Eden-like gardens in the cavernous space of a newly built aircraft hanger in Van Nuys, with their design inspired by the Missouri Botanical Garden’s magnificent Climatron dome. And under Trumbull’s close supervision, the 25-foot-long model of the Valley Forge spaceship was created by kitbashing hundreds of plastic models of airplanes, cars, and tanks.

Besides Dern’s intense portrayal of a passionate and slightly off-kilter botanist, the trio of marching drones provide a gentle respite from the film’s violence. They were portrayed by Mark Persons, Steve Brown, Cheryl Sparks, and Larry Whisenhunt, all double amputee actors who achieve the bots’ clunky movements by walking on their hands.

If the design of the drones looks familiar, that’s probably because Universal Pictures was upset at Twentieth Century Fox for imitating their work when creating Star Wars’ beloved R2-D2. A lawsuit was tossed out, although director George Lucas admitted Silent Running had been an inspiration.

“Part of Silent Running’s theme is the relationship between Dern and his drones,” Trumbull explained in a 1972 issue of genre film magazine Castle of Frankenstein. “It's not 2001 — machinery isn't malevolent. They're simply tools. Look, here you have this guy who's a murderer. He's killed three of his friends. He's alone on a vessel that's as isolated from the rest of the population as possible. He begins to crack, to feel his conscience. So he creates companions by reprogramming the drones. An interesting thing.”

Conceived as a counter-culture space adventure, Silent Running was a successful eco-flick that was actually retitled in Italy as 2002: The Second Odyssey as a way to link it to Trumbull’s pioneering work on 2001: A Space Odyssey. While the two films are thematically and stylistically distant, its message still strikes a chord of great importance.

Silent Running remains one of sci-fi cinema’s rare gems, one that provided inspiration to a generations who were touched by the final, tear-jerking image of little Dewey nourishing a tree with a dented child’s watering can.