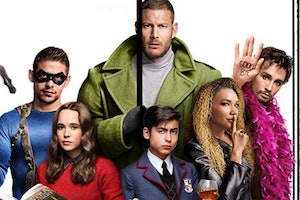 series for fans of off-the-wall journeys

Netflix's Umbrella Academy Season 2 took viewers on an incredible adventure. Unexpected twists, time travel, and a pesky apocalypse to thwart made it even more memorable than Season 1. If you binge-watched Season 2 in one sitting, you might be looking for more high-concept adventures to watch. If you liked The Umbrella Academy Season 2, here are seven other wildly entertaining TV shows to stream right now.

There is no show quite like Doom Patrol on TV. That’s not an exaggeration. A sex demon, a disco-loving villain with a clock for a head, and a donkey as a key to another universe all make up the fabric of the show. Similar to The Umbrella Academy, Doom Patrol centers a group of people — including Diane Guerror’s Jane, Brendan Fraser’s Robotman, and Joivan Wade’s Cyborg — with unique abilities. However, it’s the depth of character, not the wild adventures, that make the series truly tick.

None of the Arrowverse shows come remotely close to the zaniness of Legends of Tomorrow. For all the shade that The Flash gets for changing the timeline, the Legends are masters in blowing a hole in time, so to speak. They’ve probably even time traveled more than The Umbrella Academy’s Five and that’s saying something. Genghis Khan being displaced to 2020, Marie Antoinette casting a spell on people, and a stuffed animal as a god is what awaits viewers, among other things.

Based on the comic book series by Beau Smith, Wynonna Earp follows the titular character as she returns to her hometown of Purgatory. There, she'll face off against revenants, demons, and other supernatural creatures. The Syfy series has a very Western vibe and some pretty memorable, out-of-this-world adventures.

Stream it on: Syfy

If you enjoyed the Commission and assassin storylines from The Umbrella Academy, then you might also dig Deadly Class. The series is based on a comic series by Remender and Wesley Craig and stars Doctor Strange’s Benedict Wong. The story is about a group of students who are recruited to a private school that trains them to become assassins. “Deadly” doesn’t even begin to cut it.

Stream it on: Starz

Robert Sheehan gives a memorable performance as Klaus in The Umbrella Academy, but before that the actor starred in the popular British series Misfits. The story follows a group of, well, misfits who are sentenced to community service and end up getting powers following a mysterious lightning storm. The series also stars Iwan Rheon, who famously played the sadistic Ramsey Bolton on Game of Thrones.

Based on the popular novel series by Cassandra Clare, Shadowhunters sends fans into the world of Clary Fray, a half-angel who discovers she comes from a long line of demon hunters. The series is perhaps most notable for its LGBTQ+ representation and offering an intriguing spin on popular fantasy tropes.

Save the cheerleader, save the world. Or so goes the popular refrain from Heroes’ marketing back in the day. The NBC series follows a group of superpowered teens who have to come together to prevent a myriad of cataclysmic events in the future. The apocalypse always seems to be happening on shows like Heroes, but at least there’s always someone around to save people.

Stream it on: Peacock

More like this
Entertainment
8.5.2022 7:00 AM
The Sandman is Netflix’s first great comic book adaptation
By Mónica Marie Zorrilla
Entertainment
7.23.2022 11:44 PM
Surreal The Sandman trailer gives Netflix viewers a chance to dream
By Eric Francisco
Entertainment
8.4.2022 10:00 AM
Will there be an Orville Season 4? How the sci-fi show could return
By Ryan Britt
Related Tags
Share: