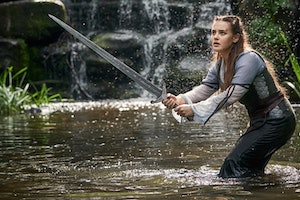 shows for fans of swords and sorcery

Shows like 'Cursed': 8 exceptional fantasy series worth checking out

Cursed tells a reimagined story of King Arthur and Excalibur, flipping the script and centering Nimue, the mythical Lady of the Lake, as the series' hero. The series premiered on Netflix and quickly claimed the top spot on the streaming service. While fans wait on news of a potential Season 2, we've compiled some similar shows worth checking out. If you liked the mystical elements of Cursed, then you'll likely enjoy these eight fantasy series too.

Warrior Nun premiered on Netflix not too long before Cursed and has a similar spirit. After waking up in a morgue, Ava (Alba Baptista) finds that she now has powerful supernatural abilities. Called upon by the Order of the Cruciform Sword, a secret branch of the Catholic church, she’s tasked with slaying demons who want to control her, all while maintaining the balance between good and evil.

Based on the book series by Andrzej Sapkowski that spawned a massive gaming franchise, The Witcher tells the stories of its main characters — the monster slayer Geralt of Rivia (Henry Cavill), the powerful sorceress Yennefer (Anya Chalotra), and the lost child Ciri (Freya Allan) — over the course of three separate time periods. It’s a bit confusing at first, but it manages to work regardless. Looking past all the sword fights and magic, The Witcher effectively tells the stories of outcasts who must find their purpose in a fantasy world upended by chaos.

The Magicians begins with Quentin Coldwater’s (Jason Ralph) discovery that the magical world of Fillory and Further, the book he’s a huge fan of, is actually real. After enrolling in Brakebills University for Magical Pedagogy, he and his friends embark on a journey to Fillory to find and confront the Beast. The unconventional Syfy series explores the deeper meaning of dark magic and what it means to truly be the hero of your own story.

The 2008 BBC series offers yet another take on Arthurian legend, kicking off with Uther Pendragon’s banishment of magic in Camelot. This forces Merlin (Colin Morgan) to hide his abilities for fear of persecution. The series sees the growth and development of both characters into the valiant beings in lore. Buffy the Vampire Slayer vet Anthony Head plays the villainous Uther and Arthur (Bradley James) falls in love with Guinevere (Angel Coulby) in a very sweet story.

A cult classic. If you rewatch (or watch for the first time), you’ll find that Cursed is reminiscent of the spirit of Xena: Warrior Princess. Lucy Lawless’ Xena has become an icon for good reason: the show has influenced so many of the fantasy series that have come after. Xena sets off on a quest to atone for her sins. Xena: Warrior Princess is full of spectacular locations, great character dynamics (hello, Xena and Gabrielle!), and awesome fight sequences.

3. The Letter for the King

The Letter for the King is also a medieval fantasy series, but it’s also a coming-of-age story. Tiuri (Amir Wilson), an aspiring knight with the ability to hear unseen voices, is tasked with delivering an important letter and ring to King Favian. Along his journey, he’s accompanied by the loyal Lavinia (Ruby Ashbourne Serkis) and even her real-life father, Andy Serkis, makes a notable appearance as the Mayor of Mistrinaut.

This medieval musical series is some of the more light-hearted fantasy fare on this list. Galavant (Joshua Sasse) is a knight who thought he had it all. That is, until the villainous King Richard (Timothy Omundson) kidnaps Madalena (Mallory Jansen), the love of Galavant’s life (or so he thinks). With the help of his squire Sid (Luke Youngblood) and Princess Isabella (Karen David), Galavant sets off to find Madalena and learns a thing or two about what real happiness looks like. Galavant is funny, charming, and filled with memorable music by the acclaimed Alan Menken and Glenn Slater. Oh, and Kylie Minogue’s character runs a medieval gay bar. This show has it all.

Starring Orlando Bloom and Cara Delevingne, Carnival Row centers the persecution of mythical creatures like the fae and faun by humankind. The series is a neo-noir fantasy, as Bloom’s Inspector Rycroft Philostrate investigates the killings of several creatures throughout a Victorian London-esque city. Carnival Row is excellent at world-building and doesn’t shy away from exploring issues that often parallel our current real-world landscape.

More like this
Entertainment
Jan. 30, 2023
Tomb Raider is Becoming a TV Series — The Last of Us Shows How It’s Done
By Eric Francisco
Entertainment
11 hours ago
The Last of Us Episode 4 trailer teases the entrance of Melanie Lynskey’s character
By Claire Fox
Entertainment
Feb. 3, 2023
Mandalorian Season 3 Trailer May Reveal an Ancient Alien Species
By Dais Johnston
LEARN SOMETHING NEW EVERY DAY.
Related Tags
Share: