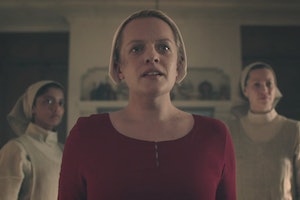 shows for fans of strong women

The Handmaid’s Tale Season 3 ended on a cliffhanger that saw Elisabeth Moss’ June injured and trapped inside Gilead, the totalitarian state that overthrew the United States government. Production on Season 4 had only just gotten started before filming was suspended due to the coronavirus pandemic, leaving its previously scheduled release date up in the air.

If you enjoyed diving into The Handmaid’s Tale's feminist dissection of a dystopia, then you'll probably enjoy these eight shows that touch on similar themes.

For fans of The Handmaid’s Tale who liked: The costumes and progressive-minded characters.

If The Handmaid’s Tale is the pioneering Hulu show with all the media attention, then Harlots is very much its neglected sister show. The period drama premiered in 2017 and has delivered three seasons of hardcore yet thoughtful feminist perspectives through the exploration of 18th century sex workers.

Set in London, a brothel owner struggles to raise her daughters amid rampant gender bias and socioeconomic injustice. The series offers a multitude of layered dynamics and fascinating characters pushing to break through the claustrophobic confines of society.

For fans who liked: Elisabeth Moss and mystery.

Set in near-future New Zealand, and it follows Moss’ inexperienced Detective Robin Griffin in the investigation of a 12-year-old pregnant girl named Tui. Naturally, Robin looks into the case, but she faces her own challenges because no one really takes her seriously and she has to prove herself, especially to Tui’s father Matt.

Top of the Lake: China Girl is arguably better than the original, which was meant as a miniseries, and is also an option. Set in Australia, the second season also stars Game of Thrones vet Gwendoline Christie as Robin's new partner, as well as Nicole Kidman.

For fans who liked: Margaret Atwood’s storytelling style and perspective.

Years after writing The Handmaid's Tale, Margaret Atwood wrote Alias Grace. The novel was adapted into a series in 2017 and has kind of flown under the radar. The story follows that of Grace Marks, a young Irish immigrant who's accused of murdering her employer in 1843. After her conviction, Dr. Simon Jordan winds up looking into the case. Starring Anna Paquin, Sarah Gado, and Zachary Levi, the series is based on a true story.

Similarly to The Handmaid’s Tale, Alias Grace explores what it means for women to be trapped (quite literally) with so few options and allies. It’s also a miniseries so there's absolutely no commitment to sit through multiple seasons and cliffhangers.

For fans who liked: The dystopian nature of The Handmaid’s Tale.

The Society is a young adult dystopian drama that sees a group of teenagers become trapped in an alternate reality after embarking on a camping trip. The eerie thing about their new circumstances is that the alternate reality is a mirror image of their hometown. They think they’re finally free and are intent on building a utopian society, built primarily upon socialist ideals and executed through female leadership, but things quickly spiral out of control.

The Society is like The Handmaid’s Tale in that it explores a societal shift that explores the various outcomes through the eyes of idealism that shatter when gender, class, and violence take hold.

For those who liked: Everything about The Handmaid’s Tale.

Based on the 2017 novel by Prayaag Akbar, Leila is sort of like the Indian version The Handmaid’s Tale, but there are enough differences to set it apart. Set in the late 2040s, Shalini is living in a totalitarian regime that has split the nation into varying communities separated by walls. Women are drugged constantly and, while they’re allowed to take a “purity” test, anyone found to be a sinner is sent to labor camps.

Families are forced apart and Shalini hears that any child of mixed heritage (Shalini is Hindu married to a Muslim man) are in danger. Shalini is sentenced to a labor camp, but sets out to find and save her daughter Leila.

For fans who liked: Women banding together.

Big Little Lies showcases a variety of women’s points of view. As in Handmaid's Tale, the characters at the forefront of the HBO show are also trapped by societal norms and expectations, despite their enviably palatial surroundings on the picturesque California coast. The series — which stars Reese Witherspoon, Nicole Kidman, Shailene Woodley, Zoe Kravitz, and Laura Dern — deals with the impact and trauma of sexual assault, abusive relationships, and the struggle to be heard.

While some of the characters clash, deep friendships are forged and they all band together and fight for each other when the time finally comes to do so.

For fans who liked: Societal and government exploration.

3% is a Brazilian dystopian thriller that sees the poor having to go through "The Process" to be able to rise to more elite tiers of society. This enclave is known as the "Offshore," a sophisticated and technologically advanced island. The story centers primarily around the journey of 20-year-old Michele Santana, a member of the lower class aspiring toward a better life.

Michele is smart, resourceful, and driven to pursue justice. Michele and her cohorts plan to infiltrate this ritzy enclave and then enact a plan to blow up the island. However, overthrowing an entire system is much harder than it seems.

If the Salem witch trials never happened, what would the world look like today? Freeform's new show Motherland: Fort Salem looks to answer that question. The series centers three witches who are trained in combat and combine their supernatural abilities to fight threats. It's an ambitious and enticing show that provides a plethora of women's perspectives, all while exploring what it means to have power in society and on the frontlines.