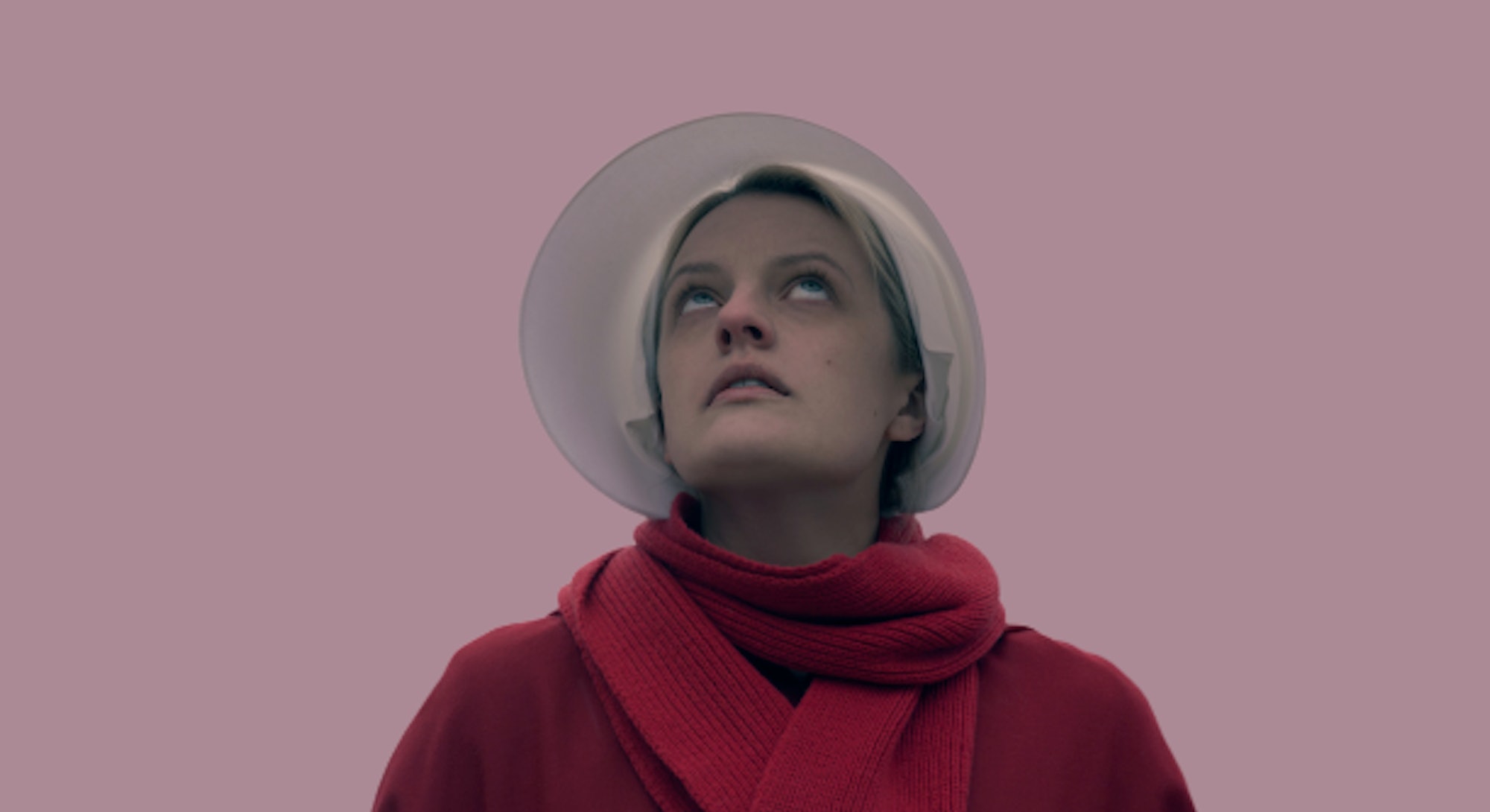 Season 3 of The Handmaid’s Tale is nearing its end, which means a major cliffhanger probably awaits us in the final few minutes of the season finale. Before we get there, however, the penultimate episode made some important progress towards June’s dangerous plan, Serena and Fred’s capture at the Canadian border, and the dark secrets of the Lawrence family. There are a lot of moving pieces, meaning absolutely anything could happen.

With just one episode left to go before we say goodbye to these characters — for now, at least, since they’ll be back in Season 4 — Inversers Mae Abdulbaki and Chelsea Szmania discuss Episode 12, “Sacrifice,” and speculate about what will happen in the Season 3 finale. Here are five big questions we have as we head into Episode 13, “Mayday.”

5. Is June the Leader the Resistance Needs? Or the One It Deserves?

June’s plan is in motion and seems to be going well. Will the 52 children actually make it out of Gilead before the finale? Is June the leader the resistance needs to make this plan work?

MAE: Like everything on The Handmaid’s Tale, June’s plan probably won’t pan out the way she envisioned. We’ve watched the good guys lose so often that it’s hard not to be pessimistic. At least some of the children should be able to make it out, though. Additionally, June doesn’t need to be the one leading the rebellion considering how long the Marthas have been working undercover without her. She’s become more like the face of the rebellion than its leader. June’s plan, as selfless as it sounds, is still putting everyone within the resistance at risk. It also has the potential to reverse some of the progress the Marthas have already made, and that’s very dangerous.

CHELSEA: June, our “fearless” protagonist, is selfish — I’ll say it! Yes, she’s been through some incredibly harrowing moments that shaped her journey thus far, but so has everyone in Gilead. We’ve seen June go toe-to-toe with Serena on more than one occasion (perhaps a few too many times for this dance to officially become tired) in which she rightly criticizes Serena for trying to bring baby Nichole directly back into the violence for her own self-serving pursuits. But June doesn’t exactly have any moral ground to stand on after willfully risking everything to get Hannah back. Perhaps she shares more similarities with Serena than she’d be willing to admit. In the face of danger, June is someone you want on your side, but don’t expect her to think her actions through first.

Despite Tuello having the Waterfords arrested, he seems to have a soft spot for Serena. Given that she now has visitation rights with Nichole, will Serena still try to kidnap Nichole and escape to Gilead? Will Tuello look the other way? Would he be justified in doing so?

CHELSEA: The Handmaid’s Tale has been criticized for having a villain problem. As viewers, we’re asked week after week to suspend disbelief and garner sympathy for Serena whenever she seems vulnerable, and as we historically know, she plays that role well, fooling anyone close to her into believing she’s capable of empathy. It’s likely Serena will play the long con with Tuello, like she did with Fred, emotionally manipulating him into thinking she’s the best person to raise Nichole. This part is easy to believe. What isn’t is the way these characters keep falling into her trap despite everything she’s put them through. Moira and Luke are often the voice of reason, reminding us of Serena’s wrongdoings even when everyone else seems to magically forget. Give us more of that.

MAE: This show definitely has a villain problem. As June put it, Serena “is only nice when she’s up to something.” This is the woman who suggested Fred rape June to trigger labor, and the fact that the show often blurs the line with regards to Serena’s villainy will never cease to amaze me. Tuello, like June before him, probably believes Serena can change. Here is a man who’s given a war criminal visitation rights with a baby that isn’t hers, no matter what Serena says. Tuello’s probably warped his thinking to believe Serena might be an unfortunate victim of Gilead even though there’s evidence to the contrary. And while I wouldn’t put it past her to escape with Nichole, Tuello could become an accessory to the crime.

3. Next Week in Little America…

Will we get to see more of Moira, Luke, and Emily’s narratives unfold as they continue to adjust to life post-Gilead?

MAE: One of the shortcomings of Season 3 is that we didn’t spend enough time with these characters. With only one episode left, their narratives will probably have to wait for Season 4. If anything, we may get some more of Luke and Moira, but not Emily. It’s important to delve into the aftermath of their experiences as refugees, especially since the show likes to reflect real-world issues. In Season 3, Emily’s story, in particular (because Moira is always sidelined), was far more compelling and interesting when compared to June’s. We need more of that multidimensional exploration — the crushing aftereffects of leaving Gilead behind.

CHELSEA: Emily is arguably the most complex character on the show. Unlike June, we don’t have the privilege of accessing her inner thoughts, which only adds to her intrigue. I’m always feverishly analyzing what she’s thinking when the camera gives her a moment of attention.

As Mae brought up, The Handmaid’s Tale often mirrors our very real political climate, leaving a bad taste in your mouth when the show forces you to think about what could be , which is easy to do if you binged it straight through like I did. (Do. Not. Recommend.) There’s a bevy of thought-provoking stories to tell from the viewpoint of Gilead refugees, but for some reason, the show won’t pause long enough on these characters to let us dive in. Should Season 4 choose to start on the right foot, it will allow us to see these characters all the way through.

2. Seriously, What the Heck Is Up With Nick?

We’ve been asking this question for weeks and we still have no answer. What is Nick’s role in Gilead’s government? And how will the show work around reframing Nick’s character arc in Season 4? Will Nick and June ever get back together?

CHELSEA: Season 2 painted a pretty picture of what Nick and June’s relationship could be if given the chance to escape Gilead and start a new life with their daughter. They were in love because they were connected by their grief and their need to survive. But when you take all of that away, what’s left of their relationship? Nick hid a very important detail from June despite the level of intimacy they shared. Given how she treated Lawrence after learning he was the mastermind behind Gilead, it’s unlikely she’ll forgive Nick for being on the wrong side of history at the start.

MAE: If The Handmaid’s Tale has done anything, it’s convey June’s hatred of traitors. She stopped trusting Serena when she went back on her promise to keep Nichole in Canada and turned on Ofmatthew after she snitched about the incident with Hannah. So we can only imagine what she’ll say and do to Nick the next time she sees him. It’s also hard to imagine Nick regaining any of the goodwill earned from the audience for being the only decent guy in Gilead. It’s like the writers didn’t have anything interesting for him in Season 3, so they retconned his backstory. Make it make sense. On top of that, they never revisited his storyline after Episode 6. The best thing to do now is to wait for Season 4 and expand upon the reveal. Unfortunately, the damage is already done.

1. Does Anyone Still Care About Aunt Lydia?

MAE: Absolutely not. Aunt Lydia has been one of the show’s more intriguing characters since Season 1, so it was exciting to learn that her backstory would be explored. It should have been compelling and interesting, but it was a complete dud. At the very least, the expectation was that we’d learn something valuable from her life pre-Gilead. Instead, her backstory was empty and unsatisfying. The episode left us with more questions than answers, especially after she befriended Noelle and then cruelly took her son away. Not sure if we needed to watch her do that if there wasn’t going to be a better explanation as to why (being rejected romantically isn’t a good reason). If anything, Aunt Lydia’s episode only served to spotlight the show’s preoccupation with the Waterfords, which is a problem unto itself.

CHELSEA: A dud indeed. Aunt Lydia’s backstory was such a disappointment that I wished I had just skipped ahead and forgone it altogether. I think we can all agree, as Mae dutifully pointed out, that being rejected by a man in your past is not a good enough reason to gouge Jeanine’s eye out or send off your red-coated “children” to be raped time and time again in order to bring blessings into the world. Again, Handmaid’s Tale asks us to put aside what we know to commiserate with the various evildoers on this show when they have any kind of human moment. With Aunt Lydia, there’s a lot to unpack. Because she is the villain we know the least about, it’s always been left up to the viewer to interpret her beginnings. Unfortunately, now that we finally know, I’d rather the series take it all back and refocus its attention back onto the Waterfords.