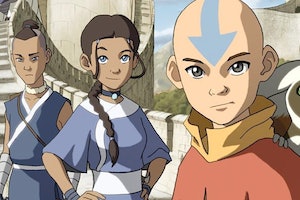 picks for fans of rousing adventure

Fifteen years after being released on Nickelodeon, Avatar: The Last Airbender has proven its longevity. Now that it’s back on Netflix, the animated series is enjoying a resurgence, uniting old and new fans alike. With a live-action remake series in development at Netflix, there’s no better time to be a fan of The Last Airbender.

That said, the beloved animated series is only three seasons long. But if you enjoyed Avatar: The Last Airbender, there are plenty of other similar animated series worth checking out. Here are seven of them to add to your next binge-watch.

WE WANT TO HEAR FROM YOU! WHAT'S YOUR FAVORITE NETFLIX ORIGINAL SCI-FI MOVIE OR SHOW? CLICK HERE TO SHARE YOUR ANSWER.

7. The Legend of Korra

This one seems like a no-brainer. The Legend of Korra is the sequel follow-up to Avatar: The Last Airbender. The animated series hails from Avatar creators Bryan Konietzko and Michael Dante DiMartino. It follows the story of Korra, a member of the Southern Water Tribe and successor of Aang, as she attempts to find balance within herself on her journey to becoming the next Avatar.

The Legend of Korra successfully branches into a new story while staying true to the original series. It also introduces a host of new characters with the occasional appearance of fan-favorite characters from The Last Airbender.

6. She-Ra and the Princesses of Power

A reboot of the 1985 series She-Ra and the Princess of Power, this Netflix animation follows the story of Adora, a teenager who attains magical powers. Adora quickly allies herself with several more princesses who, with their combined powers, attempt to defeat the tyrannical Lord Hodak and his evil Horde. What’s more, the series also has a great frenemy-style relationship between Catra and Adora that’s been likened to Aang and Zuko’s relationship from The Last Airbender.

Co-created by Avatar: The Last Airbender head writer Aaron Ehasz and Uncharted game director Justin Richmond, The Dragon Prince takes place in the fantasy world of Xadia. The Avatar similarities are notable in that The Dragon Prince also incorporates natural elements with magic.

However, that’s where the comparison ends. The Dragon Prince's main conflict stems from the inability of humans to harness magic. In response, they begin stealing it from dragons and elves to create dark magic. After the last dragon is killed in a violent battle between humans and magic creatures, Ezran, Callum, and the elf assassin Rayla band together to prevent a looming conflict.

Cowboy Bebop is an anime from Hajime Yatate — a pseudonym for the collective collaboration of the Sunrise production team. Set in 2071, the series follows a space crew of bounty hunters fifty years after Earth becomes uninhabitable. While the show follows the adventures of the Bebop crew, the story centers on Spike Spiegel and his rivalry with former friend and ally named Vicious, now a criminal with the Red Dragon Syndicate. Admittedly darker than The Last Airbender, the show gained so much popularity that Netflix is turning it into a live-action series.

Attack on Titan is another anime, adapted from the manga series by Hajime Isayama. The show is set in a fantasy world where people are forced to live in high-walled cities for fear of being attacked by Titans, giant humanoid creatures who eat people. The story centers on Eren Yeager, a teenager who wants revenge on the Titans after they kill his mother. Many fans have drawn comparisons between the walled city of the manga-inspired series and Avatar’s Ba Sing Se.

Created by Adventure Time alumna Rebecca Sugar, Steven Universe feels like Cartoon Network’s answer to Avatar: The Last Airbender and engages with similar themes of unity. The story centers on Steven and his life in the fictional Beach City. Steven Universe lives with magical warrior aliens called the Crystal Gems. Being half-Gem himself, Steven explores his own powers and joins his family in adventures to protect the world from the ancient Gem empire.

Heavily influenced by anime, Teen Titans was one of the most popular superhero shows of its time. It doesn’t immediately draw significant comparisons with The Last Airbender, but it follows similar themes and multi-dimensional character development. The series follows Robin, Starfire, Cyborg, Raven, and Beast Boy in their plight to protect San Francisco and the world from Slade Wilson and other villains.