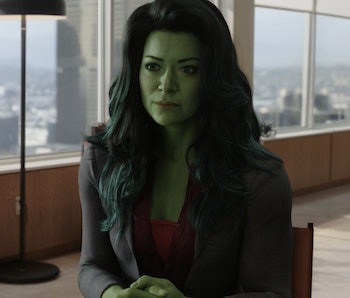 Ever since Avengers: Endgame, the Marvel Cinematic Universe has been dealing with the fallout, whether it’s emotional (WandaVision) or logistical (The Falcon and the Winter Soldier). But there are whole sectors of day-to-day life where Endgame’s impact is still unknown.

She-Hulk: Attorney at Law is the perfect show to address how the legal world handled half the population disappearing and returning. Were these people declared dead? Were their possessions inherited by their next of kin? Were they entitled to regain their property when they returned? What happened to their bank accounts? It may not be much, but in Episode 7 we finally got a clue. It was just so quick that you probably missed it.

In Episode 7, we see Jennifer Walters have a whirlwind romance that ends in disappointment and ghosting. But while they’re in the flirty text stage, we see Jen sneak a look at her phone in a meeting. But if we pay attention to the meeting like a good employee, we hear someone say, “The client’s insurance policy covers Acts of God.” Considering how Jen works in Superpowered Law, this must somehow pertain to heroes.

In insurance, acts of God cover uncontrollable circumstances. For example, if a tree falls on your car during a storm, that’s an act of God you could get covered by insurance. This throwaway line implies that if Thor smashes your car while chasing after a supervillain, you could claim that too. Presumedly, that means the Blip was also considered an act of God, especially considering the infinity stones basically made Thanos a deity.

Maybe calling the Blip an act of God is too large of an assumption on our part, but that one line is all the information we have. Showrunner Jessica Gao told Lifehacker Australia that the series wouldn’t touch the Blip at all.

“So many shows and movies in the MCU have already kind of covered that and, you know, it’s been talked about a lot that it just felt like we’ve accepted it,” she said. “We live in a world where that’s already happened and people have already moved on.”

While the MCU may have moved on, fans still have questions about the implications of the Blip. Seriously, there are so many potential issues. If someone’s spouse was Blipped and they remarried, are they now on the hook for bigamy? Has a Blipped person accrued years of interest on unpaid debts?

There are countless questions here that could be answered in She-Hulk, but apparently that’s not going to happen. So until there’s a clear explanation where someone lays out how the world dealt with all these issues, it will just have to remain on the list of MCU mysteries, alongside how Howard the Duck ended up with the Collector in Guardians of the Galaxy, and why Thor had a vision in The Dark World.

Unfortunately, we’re probably not going to get a Disney+ sure about MCU insurance adjusters, but at least we can make an educated guess and suggest that insurance companies begrudgingly had everyone covered.