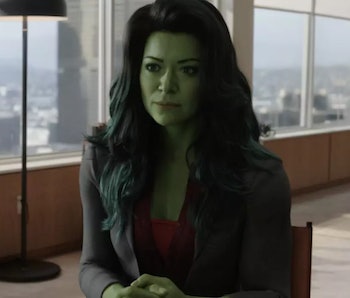 To quote a famous frog, It’s not easy being green. As we observed in She-Hulk Episode 2, Jennifer Walters’ (Tatiana Maslany) courtroom super-heroics got her branded as a liability and fired from her job as an L.A. district attorney.

But fortune swung her way in the form of senior partner Holden Holliway (Steve Coulter) of GLK&H, the rival law firm in the very same case. Walters quickly learns she’s expected to lead the new Superhuman Law Division, but the catch is that she must appear only in She-Hulk form while in the office and the courtroom. At least the corner office has a super sweet view with a stocked mini-fridge!

She-Hulk’s first case is the parole of the monstrous Emil Blonsky, (aka, Abomination), the supervillain from The Incredible Hulk and briefly shown in Shang-Chi and the Legend of the Ten Rings who tried to murder her cousin, Bruce Banner. Despite the conflict of interest, Walters goes to meet Blonsky at the maximum security penitentiary run by the Department of Damage Control.

Actor Tim Roth has a lot of fun as the seemingly reformed, haiku-writing Blonsky and this is truly the highlight of the episode, with the veteran actor trying to explain to Jen that he’s actually a victim of the U.S. military after they supposedly pumped him full of super serum.

Now She-Hulk is officially defending Blonsky and has a strategy for his release, even though footage of his participation in an underground fight club after a prison break surfaces. So much for rehabilitation! Let’s march into She-Hulk Episode 3 and see what mischief is ahead.

How many episodes are left in She-Hulk?

The debut season of She-Hulk: Attorney at Law will consist of nine episodes, with the finale hitting the airwaves on October 13, 2022. After this week’s chapter, there are six episodes left.

What is the plot of She-Hulk: Attorney at Law Episode 3?

Now that Jennifer has fresh employment at GLK&H heading up their new Superhuman Law Division, she needs this Blonsky case to go smoothly and she’ll no doubt be preparing her arguments to present. With Abomination battling Sorcerer Supreme Wong in a shocking viral clip, we expect her to seek the famed sorcerer out as a witness while trying to convince the parole board that Blonsky is no longer a threat to society. Good luck with that.

Perhaps we’ll also learn why Bruce Banner is zooming around in that cool Sakaaran starship!

Who is in the She-Hulk cast?

Is there a trailer for She-Hulk Episode 3?

While there is no specific trailer for the third chapter, Marvel Entertainment did deliver the final series trailer for She-Hulk: Attorney at Law on July 23, 2022 and it highlights the light-hearted tone of the show as The Hulk teaches Jennifer about being a gigantic Hulk creature. Don’t miss the surprise cameos by Benedict Wong’s Sorcerer Supreme and Charlie Cox’s Daredevil!

Will there be a She-Hulk Season 2?

There’s still no word from Disney+ on a sophomore season. So it looks like She Hulk: Attorney at Law will only be a one-and-done limited series, but don’t count the green-hued lawyer out yet.

She-Hulk: Attorney at Law Episode 3 premieres on Disney+ on September 1, 2022.