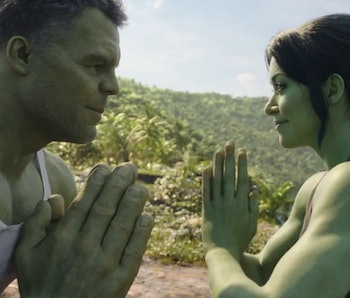 The third episode of She-Hulk: Attorney at Law checked a lot of boxes for a modern, hip, Marvel series. There was a feminist rant, a celebrity cameo, and a social media montage. But there was also a fair amount of MCU cameo fodder, both through the surprise appearance of Wong, the Sorcerer Supreme, and, of course, Emil Blonsky.

But hidden in a montage was another Marvel cameo you may not have caught. If you dive deep into this character’s Marvel history, there’s a chance he could become a force to be reckoned with in the MCU.

Amid the various TV programs reporting on She-Hulk is an extended clip of a show called The Conversation with Jefferson Coop. The host, an obvious Anderson Cooper parallel, interviews a lawyer named Gideon Wilson, the prosecutor who put Emil Blonsky in jail years ago.

It makes sense for She-Hulk to introduce more lawyers. But Gideon Wilson? As in Sam Wilson, the new current Captain America? There aren’t a lot of coincidences in pop culture and, if the comics are anything to go by, the two are indeed related. Gideon Wilson is the brother of Sam and Sarah Wilson, but he’s not immediately featured in the comics. Instead it’s his son, Jim, who gets the limelight.

Jim Wilson was first introduced in the ‘90s as a replacement for Rick Jones, the Hulk’s original sidekick. His storyline culminated in him dying of complications from AIDS after begging Hulk for a blood transfusion, hoping it would cure him. Hulk refused, knowing from the experience of saving his cousin Jennifer Walters that his irradiated blood could turn Jones into a monster. Jim understands and dies peacefully with Hulk at his bedside. The miniseries was published at the height of the AIDS epidemic to show readers that the disease was universal, not just something the gay community suffered from.

In 2007, we saw the tragedy of Jim Wilson from the perspective of his father, Gideon, a minister who blamed his runaway son’s demise on the Hulk and vowed revenge. Gideon joined the Gamma Corps, a group of villains with various grudges against the Hulk, and who were given gamma powers by other Marvel characters.

Gideon’s inclusion in She-Hulk could be nothing more than an Easter egg, but it could also be our first look at a prominent character. Could he visit his brother Sam in Captain America 4? Will we see Jim’s story in a future Hulk-adjacent movie? Since Gideon is a prosecutor in the MCU instead of a minister, could he eventually clash with She-Hulk in the courtroom... and outside of it, too? And, since he’s Captain America’s brother, could Sam be sucked into the conflict?

There’s no way to know yet, but this cameo seems a little too prominent just to be a wink to the fans. Maybe we’ve been given a look at a major new Marvel villain.