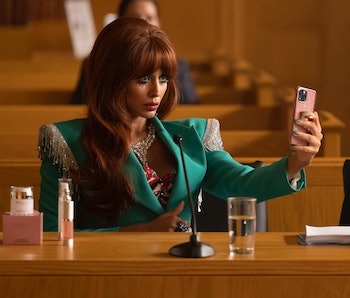 The series premiere of She-Hulk: Attorney at Law isn’t all that interested in supervillains. Instead, the episode dedicates most of its runtime to exploring the life of Jennifer Walters (Tatiana Maslany) and revealing how she got powers similar to those of her cousin, Bruce Banner (Mark Ruffalo). However, She-Hulk Episode 1 does introduce the series’ primary antagonist, Titania (Jameela Jamil), in its final minutes.

After bursting into a courtroom with her super strength, Titania finds herself on the wrong end of a well-placed punch from Jennifer, which sends her careening into a nearby wall. While the episode ends with Titania getting arrested, it’s clear that She-Hulk viewers haven’t seen the last of her.

In fact, if She-Hulk stays even remotely faithful to Titania’s comic book origin story, then her role in the MCU may extend far beyond the confines of Marvel’s latest Disney+ series.

In the comics, Titania is a girl from Denver who spends most of her adolescent life wishing she could be strong like the superheroes that populate her world. She gets her chance during the 1984 version of Secret Wars, when a being known as the Beyonder decides to use Titania’s hometown as part of his new planet, Battleworld.

In the aftermath of Battleworld’s creation, Titania and her friend Marsha Rosenberg find themselves trapped on the same planet as many of their universe’s greatest heroes and villains, including Doctor Doom. Doom offers them the chance to join his growing army of supervillains, and when the two girls accept he gives them powers with the energy from a nearby storm.

The process gives Titania superhuman levels of strength, stamina, and durability, but those new powers also turn her into a prideful and arrogant person. Throughout the rest of Secret Wars, Titania follows Doom’s lead by going head-to-head with several superheroes, including She-Hulk and Spider-Man.

Right now, it’s unclear exactly how similar She-Hulk’s version of Titania is to the character’s original comic book incarnation. Her MCU origin story is still a secret, so we don’t know if she received her powers from Doctor Doom or through other means.

Considering that Doctor Doom has yet to appear in the MCU, one would be inclined to think that She-Hulk will end up rewriting Titania’s origin story. However, Doctor Doom is heavily rumored to have a secret role in this year’s Black Panther: Wakanda Forever, which is set to be released less than a month after She-Hulk: Attorney at Law’s Season 1 finale premieres on Disney+.

That rumor, combined with Marvel Studios’ recent confirmation that Avengers: Secret Wars will be released in 2025, makes Titania’s comic book ties to both Doctor Doom and Secret Wars worth noting.

The Inverse Analysis — The consensus among comic book fans is that Avengers: Secret Wars will likely borrow more from the 2015 iteration of Secret Wars than from the original 1984 version of the storyline. However, Doctor Doom plays noteworthy roles in both versions, which is why it’s so easy to believe that his MCU debut may be just around the corner.

Even if Doom does make his debut this year, that doesn’t necessarily mean he’ll have any connection to Jameela Jamil’s Titania. Thanks to her role in She-Hulk: Attorney at Law, however, Marvel fans may not have to wait much longer to find out just what her deal is.

New episodes of She-Hulk: Attorney at Law premiere every Thursday on Disney+.