"Messing around with some legendary friends" 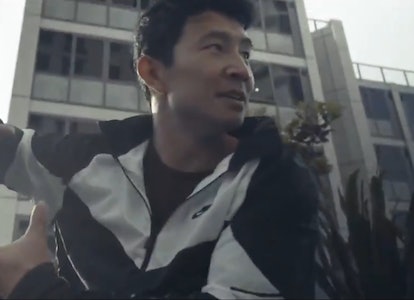 When Simu Liu walked onstage at Comic-Con in 2019, he was effortlessly charismatic and charming in front of fans of the Marvel Cinematic Universe. But before he was cast as the kung fu superhero Shang-Chi, the Asian-Canadian actor was best known for his roles in comedies like Kim's Convenience, not martial arts action movies.

This begged the question: How will Simu Liu perform as Marvel's "Master of Kung Fu"? After a new clip Liu shared on social media, we finally have an answer, and now Shang-Chi and the Legend of the Ten Rings may be the most exciting Marvel movie ever.

What happened? — On Monday, Simu Liu shared on his official Instagram and Twitter a brief cinematic fight scene he says was filmed last year for fun. Directed and choreographed by Joseph Le, the scene shows Simu Liu squaring off with actors Vi-dan Tran and Zac Wang.

"Messing around with some legendary friends last year during the holidays," Liu wrote in the caption. A timestamp in the bottom left corner dates the shoot to December 1, 2019, just two months prior to the beginning of Shang-Chi and the Legend of the Ten Rings filming in February 2020.

In the video, Liu uses a combination of various martial arts styles, including what looks like shaolin wushu and Jeet Kune Do. Despite being less than a minute, the short is very well-made and very well-choreographed, and successfully makes Simu Liu look like a seasoned action star. If you didn't already know Simu Liu, you could easily mistake him for someone as experienced as action stars like Tony Jaa, Scott Adkins, and Donnie Yen.

Does Simu Liu know kung fu? — Liu's exact background in martial arts is unknown. Comb through Liu's social media and you'll find numerous clips of Liu demonstrating envious athleticism, including gymnastics and parkour, as well as a proficiency with nunchucks. However, there is no verified evidence of a comprehensive martial arts background. Liu himself joked with a fan on Twitter that the kung fu he knows are "the art of vanity and terrible life choices."

But even veteran action stars will admit that a deep knowledge of martial arts isn't necessary for the screen. In a 2015 interview with GQ, Into the Badlands star Daniel Wu said that an expertise in martial arts and being a martial arts star "doesn't necessarily translate." While physicality is obviously necessary from actors, camera work, choreography, and proper directing carry quite a bit of the workload.

"You see that happen a lot, a lot of professional fighters don't necessarily make it so well into the movie world. You've gotta understand camera angles, camera movement — a kick that may not be very powerful may look very powerful from a certain angle. I'll come across that a lot when I'm working with other professional fighters. They'll say, 'But that's not a strong kick,' and I'm like, 'Look at the screen. Look at this particular angle. It looks crazy powerful, right?'

"I learned that too. I came from doing Wushu and other martial arts, and then I got into movies, and I had to learn that as well. The language of martial arts movie fighting. It's a different thing, it's a different kind of logic. For example, a boxer, or certain styles of martial artist, don't look good on screen because they're short and quick. And you need to be able to see that movement happening on screen. If it's short and quick, it may be really effective in real life, like a quick jab to the throat. But if the audience doesn't see it, doesn't feel that power, then it's useless."

The Inverse analysis — Whether Simu Liu knows kung fu for real or not, that doesn't matter when it comes to playing Shang-Chi on the big screen. Liu clearly has the athleticism to play a martial artist, even if he isn't one.

Meanwhile, though Marvel movies have plenty of action, the character Shang-Chi is a different beast. As the master of all martial arts and the best hand-to-hand fighter in the Marvel Universe, Shang-Chi's movie has to show off exciting martial arts action and choreography. A Shang-Chi movie without exciting action is like a Spider-Man movie without web-swinging or wall climbing. If Shang-Chi doesn't kick ass, the whole point of the movie is missed entirely.

There are a lot of expectations riding on Shang-Chi to do something different than the last 20-plus Marvel movies, and until Liu's video, it was a genuine curiosity how Liu was going to perform as an onscreen martial artist. This was, after all, a role Stan Lee envisioned for Bruce Lee's son, Brandon Lee. But with this Instagram video, any concerns about Shang-Chi and the Legend of the Ten Rings can officially be put to rest. Starting now, the 2021 Marvel movie is one of the hottest things to look forward to in the new year.

Shang-Chi and the Legend of the Ten Rings will be released in theaters on July 9, 2021.