Why does every Marvel film insist on making the same mistake? 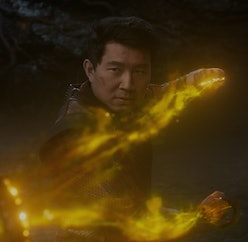 If there’s one Marvel movie that doesn’t need an overblown, mindless CGI-heavy third act, it’s Shang-Chi and the Legend of the Ten Rings. Unfortunately, that’s exactly what it gets.

Marvel’s latest blockbuster features some of the most entertaining hand-to-hand combat scenes to ever grace the Marvel Cinematic Universe. As directed by Destin Daniel Cretton, the film succeeds in paying homage to Hong Kong and Chinese cinema classics like Police Story and Hero without feeling like a blatant rip-off.

Beyond that, Tony Leung’s Wenwu emerges from Shang-Chi as one of the very best and most complex MCU villains to date, and the broken familial bonds that exist between him, Simu Liu’s eponymous hero, and Meng'er Zhang’s Xialing provide the film with a strong, complex emotional foundation.

And yet. There’s one major flaw with Shang-Chi that speaks to the MCU’s worst habit at large.

Major spoilers for Shang-Chi’s ending ahead.

For nearly its entire runtime, Shang-Chi and the Legend of the Ten Rings feels like no other Marvel Studios release. Part of that is owed to the quality of the film’s early martial arts sequences, which easily rank among the best and most thrilling action scenes that the MCU has seen. But for the most part, what makes Shang-Chi special is its focus on character.

This is especially the case when it comes to Leung’s Wenwu, who emerges over the course of the film as one of Marvel’s most intimidating, charming, and layered screen villains. He’s prideful, handsome, ambitious, ruthless, and caring all at the same time. And the journey that Liu’s Shang-Chi goes on throughout the film is one of learning to come to terms with the love, bitterness, and trauma all compacted at the foundation of their relationship.

Marvel, for some inexplicable reason, cannot recognize the value of a more intimate ending.

The bond between Wenwu and Shang-Chi looms large over everything in the film, and it’s through the exploration of their turbulent history that director Cretton’s talent for navigating emotional upheaval (as previously demonstrated in films like Short Term 12 and Just Mercy) is most effectively utilized. When the film eventually reveals that Wenwu aims to bring his wife (Fala Chen) back from the dead, this twist offers Shang-Chi the opportunity to confront the deep-rooted pain that tore Wenwu and his son apart to begin with.

And to an extent, their final confrontation does deliver on that front, particularly in their bitter fight on the grounds of Ta Lo, which sees Shang-Chi and Wenwu trading vicious blows as they blame one another for failing their family. It’s a powerful, visceral sequence, and the moment in which Wenwu and Shang-Chi’s shared grief and residual fury are most palpable.

But instead of having the film’s climax remain confined to a fight between Shang-Chi and Wenwu, the film instead brings in giant CGI dragons and soul-sucking monsters who — surprise, surprise — threaten to destroy the whole world.

It’s a needless diversion, one that robs Shang-Chi’s third act of its emotional power from the moment Wenwu first steps foot in front of a giant, scaled-up gate. By the time he’s carried away in the claws of the film’s resident CGI abomination (just 10 minutes or so later), all the power lingering in the wake of his and Shang-Chi’s fight in the village has been stamped out by the digital nature of their environment and the film’s reliance on spectacle over substance.

What’s even worse is that it’s hard not to feel a sense of déjà vu watching Shang-Chi’s lackluster third act. It was only a few months ago, after all, that Black Widow fell victim to the same trap by forcing its relatively character-focused, intimate story to accommodate a giant CGI set-piece that saw characters free-fall through the sky and floating buildings crash into the ground. Marvel, for some inexplicable reason, cannot recognize the value of a more intimate ending.

To put it simply: Shang-Chi and Wenwu’s relationship was dramatic and engaging enough for the film to end with a one-on-one confrontation between them. There’s no getting around the sense of disappointment and frustration that bubbles up once you realize that Marvel thought they needed to replace Tony Leung, one of the greatest actors in the history of cinema, with a bland CGI creation as the primary villain of Shang-Chi’s final 10 minutes. It’s an undeniably baffling decision — full stop.

Shang-Chi and the Legend of the Ten Rings is, in so many ways, a cinematic achievement. Not only is it the first MCU film with both an Asian director and predominantly Asian cast, but it also stands as one of Marvel Studios’ best films from the past few years.

The bus fight in the film’s first act is one of the strongest action sequences in MCU history, and the opening “fight” between Leung’s Wenwu and Fala Chen’s Li might just be the most balletic and playfully romantic scene in any Marvel movie, well, ever.

All of which is to say that Shang-Chi deserved to exist free of the formula Marvel seems hellbent on imposing on every one of its titles — no matter how inevitably such an unimaginative approach sacrifices their films’ narrative power.

Shang-Chi and the Legend of the Ten Rings is playing in theaters now.