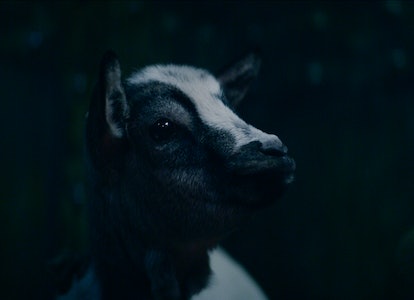 Rag-tag criminals huddle in a small train car as they make their way across the “Fold” — a cloud of mystical darkness filled with winged monsters who feed on flesh and are drawn to light. Their transport is running empty on fuel and these winged “volcra” are closing in.

It looks like the end, until one criminal, Jesper (Kit Young), grabs hold of a fuzzy white goat for support. He finds the courage to fire his firearm at the volcra. This gives the group momentum to make it through safely to the other side. With an emotional support goat on your side, nothing is impossible in Shadow and Bone.

There is no man, woman, or creature in the Grishaverse as regal, as brilliant, as fluffy as Milo the Goat. Forget Team Darkling (Ben Barnes) or Team Mal (Archie Renaux), if you’re not Team Milo, you might as well get eaten by volcra because you’re already dead inside.

SCENE STEALERS is a countdown that salutes the unforgettable small-screen characters of the year. Milo the Goat is #25.

Milo only appeared in two episodes of Shadow and Bone, the Netflix adaptation of Leigh Bardugo’s fantasy book series. But he definitely made an impression, and not just because he’s an adorable sidekick. Milo played a critical role in the series, first by keeping Jesper calm long enough to get our heroes through the Fold, and later helping Mal escape the Darkling’s shackles. If Milo hadn’t been there, his absence both times would have jeopardized the world.

Who is Milo the Goat?

Milo, or Sankt Milo as he is sometimes known among fans, was played by two identical goats named Ugri and Bugri. They were allegedly big divas on set. “They really should have been called ‘Screaming’ and ‘Pooping,’” joked Kit Young in an interview with Nerdist, likening one of them to one of the weirdest viral memes. As for Pooping, well, you can imagine that one.

There was a trick to filming with diva goats: making sure they were fed. They were calmer and more cooperative to work with, Young said, “but it did mean that they were even heavier.” Executive producer Daegan Fryklind told Nerdist the goat in the script was described as the “World’s Cutest Goat.” With their little black spots and sweet faces, Ugri and Bugri certainly looked the part.

Ugri and Bugri may have been rascals between takes with Young, but they kept cool for one crucial take. When things start getting dicey in the Fold, Jesper realizes that Milo isn’t a sacrifice for the volcra, but a supportive companion. “We wanted to get this moment where Jesper is really needing this goat,” Young said. “The director was like, ‘What if you hug it?’ And I did.”

They only got one good take before the goat began headbutting its human costar. “It was this really tender moment, and then suddenly that goat’s like, ‘I’m done.’” The goat knew what needed to be done, and they did it perfectly.

When Shadow and Bone premiered on Netflix in April, Milo became an immediate touchstone for fans. Viewers might be torn on their ships, but Milo was a universally accepted truth evidenced by the plentiful fan art in his honor. Netflix even released “Shadow and Bone: The Milo Cut,” an abridged version of the series made up only of Milo’s scenes. It’s likely because Milo played a key part in saving our heroes, a genuine surprise as animal sidekicks rarely get an actual arc (looking at you, Alligator Loki and Ein). Milo the Goat is more than just a gimmick, he’s one of the best characters on television in 2021.

It’s unclear if Milo survived the final battle of Shadow and Bone. He was last seen helping Mal escape, so he could still be wandering East Ravka. With all his friends on the western side of the Fold, Milo’s all alone, which could be great fodder for a spinoff. Imagine a web series of Milo traveling the Grishaverse looking for Jesper. Perhaps his adventure can introduce new characters and keep fans busy until Season 2. A Milo and Jesper spinoff is also appealing: a show about an outlaw and his goat getting up to no good. Like Aladdin and Abu, pre-Genie. Is there anyone who wouldn’t watch that? I think not.

Milo the Goat is sweet, cuddly, loyal, cute — and above all, a teammate, not a mascot. During the Crows’ trip across the Fold, his bundle of white fur is literally the light in a sea of darkness. In April of 2021, mere months after the Insurrection of January 6 and one year into a global outbreak, that’s what we needed. Milo is a source of pure delight that is good. And fuzzy. Being fuzzy definitely helps.

Shadow and Bone is streaming now on Netflix.