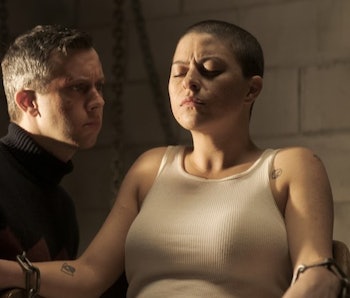 It's been a rough few years for fans of Stephen King. After a promising start, the It movie adaptation took a sharp dive in quality in Chapter 2, while a big-budget adaptation of Pet Semetary was equally unimpressive. Television hasn't been a much better home for the horror master's stories either (with some debatable exceptions), but it still may come as a huge surprise that the best Stephen King adaptation in years is barely a King story at all. It's Search Party Season 4.

The TBS horror-mystery-comedy, starring Alia Shawkat (Maybe on Arrested Development) along with a stellar lineup of up-and-coming comedy stars (John Early, John Reynolds, and Meredith Hagner), made the jump to HBO Max for Season 3. Now, in Season 4, which premiered with a three-episode drop on January 14, the show has pivoted from a millennial-skewering whodunnit to a riveting courtroom drama (Season 3 was a masterpiece featuring Louie Anderson as an incompetent defense lawyer) to a genuinely scary thriller in Search Party Season 4.

Even with three short seasons to catch up on, it's well worth the effort to binge your way through Search Party in time to enjoy Season 4's riveting take on a Stephen King classic: Misery.

Every season of Search Party manages to end on a cliffhanger — even if the show's future always seems to hang by a thread — but Season 3 brought that tension to a new level. After successfully lying her way through a murder trial in which she was clearly guilty, Dory Sief (Shawkat) returns home only to be immediately kidnapped by a stalker named Chip who's become obsessed after watching trial coverage on TV.

Played by comedian Cole Escola, Dory's stalker instantly becomes the runaway star of Search Party Season 4. After locking Dory in the basement of his aunt's abandoned mansion, Chip traps her in a recreation of her NY apartment with no plush furniture and sharp corners. He seems genuinely convinced that he's doing the right thing by isolating Dory from her terrible friends (that part is true). He feeds her a steady diet of frozen chicken nuggets until she gets diarrhea and then takes her upstairs blindfolded for her first shower in weeks.

Channeling his best Cathy Bates, Chip threatens to break Dory's legs with a baseball bat if she tries any funny business. After Dory's failed escape attempt in Episode 3, I'm genuinely terrified to find out what Chip will do next, but I'm pretty sure it will involve that bat.

Search Party Season 4 might be great, but is it fair to call it the best Stephen King story in years? Not really. It's not technically based on anything King ever wrote, though there's no denying the clear influence Misery has on this story. But when you consider the other options, this becomes an easier argument to make.

Beyond the failures of It (an almost unwatchable Chapter 2 that completely misunderstood what we liked about Chapter 1) and the disappointment of Pet Sematary, it hasn't been the worst few years for King. HBO's The Outsider was a triumphant and terrifying spin on his writing, though the ending felt anti-climactic, while Doctor Sleep somehow managed to be a respectable sequel to The Shining (even if most people never bothered to see it) and The Stand landed with a thud on CBS All Access despite its all-star cast. In other words, we've seen plenty of valiant attempts, but nothing truly great.

Search Party Season 4 is far from over, but in just three episodes it's already surpassed all of those shows and movies combined. If this HBO Max series can stick the landing, it may go down as one of the scariest (and somehow also funniest) shows of this new decade. And Cole Escola might just wind up in the hall of horror villain fame right next to Cathy Bates.