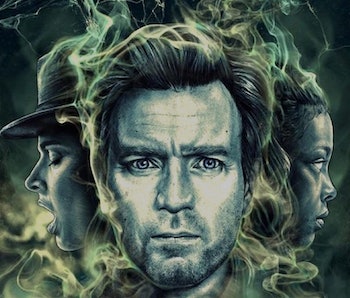 If The Shining is the dark depths of a drinking binge, Doctor Sleep is the morning after. A movie so in love with Kubrick’s 1980 film, Doctor Sleep is a worthy addition to the Shining experience. It’s also an impeccably imagined (and, whoa, hilarious?) sequel. Doctor Sleep also changes how “the Shining” works in some odd ways, but if that’s an issue you’ll have to blame the source material (Stephen King’s 2013 book) not director Mike Flanagan’s adaptation.

In theaters Friday, Doctor Sleep adapts King’s book of the same name, which continues the story of Danny, the child of Jack Torrance in The Shining. Decades after the closing of the Overlook Hotel, an adult Danny (Ewan McGregor) has inherited his father’s alcoholism to suppress his “Shining” and deal with the trauma he incurred.

Wandering the U.S., Danny lands in Frazier, a close-knit New England town where he befriends a local (Cliff Curtis), gets clean, and works part-time at a hospice. There, Danny gets the name “Doctor Sleep” when patients learn his Shining (and a psychic cat) can help them pass on. It seems he’s finally found happiness, or at least stability, until Danny’s Shining puts him in contact with a young girl, Abra (Kyliegh Curran), who needs his help to stop Rose (Rebecca Ferguson), the leader of nomadic quasi-immortals who feed on other children with psychic powers.

Doctor Sleep is a complete experience, even if it’s less alluring than its predecessor. It’s still terrifying and disturbing (a kidnapping/feeding scene in the film is one of the most harrowing moments I’ve had sitting in a theater), but it’s also wildly funny. If you’ve never laughed at a jump scare, prepare for Doctor Sleep, whose organic mix of terror and humor comes in menacing doses. Add in Flanagan’s obsession for the original book/film and Doctor Sleep has gas in the tank to last even through long stretches that nearly halt its momentum.

The key to Doctor Sleep is its relationship to The Shining. As if to double down on the characters’ metaphors with alcoholism and facing ghosts of the past, Doctor Sleep is an unambiguous, sober look into a once threatening and dark world. What used to scare us, the film argues, can’t scare us for long. And in redefining Danny’s “Shining” from an ancient phenomenon to a psychic power that qualifies him for the X-Men or Jedi training, Doctor Sleep becomes the rare sequel that successfully remixes (not remakes) what came before. Questions are answered, and that alone will polarize fans.

That’s not to say Doctor Sleep doesn’t love The Shining. In fact, Flanagan has serious love for the movie, but his approach to the story is stone-cold abstinence. Though there’s a college tuition’s worth of homage paid in Doctor Sleep. Flanagan’s demystifies King’s world. He’s switched on a light, and the cockroaches scatter.

The movie isn’t afraid to do weird — at one point Rose flies perpendicular to Earth from space, culminating in a confrontation with Abra in a green anime wig — but it is wholly more explicit about its terms and rules, on the supernatural forces are at play, than Kubrick ever was.

But think about how much The Shining has fueled imaginations for 40 years. No movie, other than the Star Wars saga, has created so much speculative discourse looking for a deep meaning than The Shining. Never mind that Stephen King once called Room 237, a whole-ass documentary about the movie’s fan theories, “academic bullshit.” No one, not even King, can stop fans from poking and prodding at the meat of his story. And you can’t blame them, Kubrick gave them all the forks and knives to do so.

Doctor Sleep is not as inviting of theories or even as much deep thought as The Shining, but it is confident in the movie it wants to be. Doctor Sleep probes one of the most impenetrable horror movies of the 20th century with X-ray vision, etching its own marks onto an untouchable touchstone.

A lot of the film hinges on Ewan McGregor’s Danny. The ghost of Jack Nicholson looms throughout the entire movie, culminating in another spin on an old classic seen in The Shining. Doctor Sleep challenges McGregor, who in his performance as Danny recognizes that he can’t, and shouldn’t, just be Jack Nicholson 2.0. Danny is a different person than his father; McGregor is a different actor than Nicholson. That’s a universal lesson in Doctor Sleep that is worth the time, be it three hours or 40 years, to finally get it.

Yes, you need to watch The Shining to understand Doctor Sleep. Unlike sequels that play it fast and loose with actual sequel-ism, the two films share an Old and New Testament relationship. No, Kubrick never anticipated a sequel, but Doctor Sleep is that movie, an ice cold shower over the buzzy fever dream Kubrick helmed all those years ago. This is the rare sequel that is so in love, and so connected to, the original story, it successfully tears it down brick by brick.

More like this
Entertainment
Jan. 26, 2023
Teen Wolf: The Movie is fan service done right
By Mónica Marie Zorrilla
Entertainment
Jan. 25, 2023
Infinity Pool is a hedonistic head-trip
By Isaac Feldberg
Entertainment
21 hours ago
Talk to Me unleashes a gruesome ghost story on the TikTok generation
By Andy Crump
LEARN SOMETHING NEW EVERY DAY.
Share: