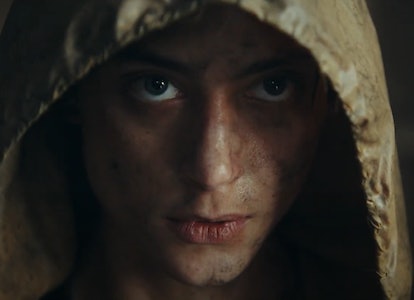 Nothing is more science fiction than the cautionary tale. From Wall-E to Don’t Look Up, grim depictions of the Earth’s future allow for great environmental allegories while still spinning speculative yarn. But usually, these movies focus on the human mistakes that resulted in an apocalypse.

One 2021 feature takes a slightly different approach. Streaming on Netflix, the dystopian thriller explores the far-off future, where those very mistakes and the end of the world have become history. The movie’s present finds humanity reckoning with what — and who — they left behind.

Directed by Swiss director Tim Fehlbaum, The Colony follows Louise Blake (Nora Arnezeder, the Coyote from Army of the Dead), a legacy astronaut sent back to Earth long after those who could afford it abandoned the planet. Though it’s a German and Swiss movie, the film is in English and even includes some recognizable actors, like Game of Thrones’ Iain Glen.

The Colony establishes the catastrophe from the start. After pandemics, wars, and pollution, humanity cut its losses and took to a far-away planet called Kepler 209. Louise is on a second attempt to return to Earth, trying to find a solution to Kepler 209’s strange effect on fertility.

But on Earth, nothing is as it seems. There are people — and miraculously children — left behind. They have now flourished into a full community and culture. And Louise soon finds out that Kepler’s first attempt to reach Earth wasn’t as unsuccessful as everyone first thought.

A number of themes weave through this film, portraying the bleakness of the situation in dull gray tones. (It isn’t the most visually varied approach.) Louise soon realizes the mantra she was raised with, “for the many,” isn’t as noble when the actions that are good for the many are detrimental for the few who have human desires and needs.

Iain Glen plays Gibson, a member of the last expedition who takes it upon himself to educate those left behind. It becomes increasingly clear the titular “colony” may not refer to the space colony on Kepler. Suddenly, what started as a climate change allegory becomes a cautionary tale about classism, colonization, and the horrors of assimilation.

It’s hard not to see the parallels to the colonization of North America and the invention of residential schools, schools created in order to isolate Indigenous children away from their native culture. In The Colony, the elite returns to Earth and reinvents colonization.

When you think of space colonies, you may think of hope, the future, and survival. Where The Colony succeeds is in showing just how the concept of colonies can become a real cautionary tale.

The Colony is now streaming on Netflix.