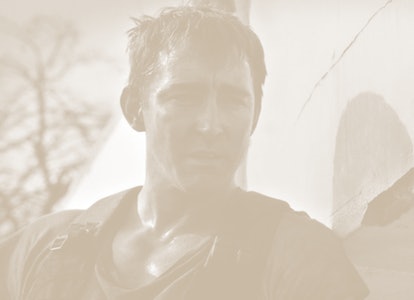 “There is nothing new under the sun.”

This is a maxim brought up whenever anyone bemoans the lack of original concepts today. And it’s easy to see why people say that: The Lion King is just Hamlet, Cruella is just She-Joker, and every Marvel movie is just like the other.

But the truth is actually a lot more nuanced. Yes, a lot of movies pull from the same story beats, but they aren’t copies of each other. Those beats are ingredients that can be mixed and matched to create new tastes, musical notes that can be rearranged into remixes.

For this 2017 film, the best tropes from your favorite sci-fi movies come together to create a refreshing new take starring a criminally underrated actor. Here’s why you need to check out Revolt before it leaves Netflix on September 29.

Written and directed by Joe Miale, Revolt stars Lee Pace as Bo, an American soldier who wakes up in a Kenyan jail with no memory of who he is, where he is, or who he’s fighting.

Bo’s amnesia is actually a clever screenwriting tool — when the film starts, Bo knows nothing, just like the audience. He becomes the audience surrogate, exploring this new post-apocalyptic world and asking all the “stupid questions” needed to establish the premise.

In fact, his name may not even be Bo. In looking for identification, French aid worker Nadia (Bérénice Marlohe) sees a torn-off tame tag where those two letters remain, so that’s what she calls him. Slowly, Bo pieces together what’s happening: the world is under attack by hostile alien machines, and some xenophobic locals believe the Americans are controlling them.

As he tries to escape Nairobi, Bo finds himself able to project electric energy from his hands, Sith-lightning-style. Together with Nadia, he sets out to the local US base to find answers, and along the way discovers some terrifying truths about his own history — things he’ll have to come to terms with quickly to save the world.

Lee Pace approaches this admittedly very ridiculous premise with the same caution and care he gives every other role, from Pushing Daisies to an Angels in America stage revival.

“I think sci-fi — especially these days — provides sort of a grotesque, so we can understand modern life,” he told BleedingCool. “You can create this scenario where it's the end of the world, and it's totally upon us, it doesn't just feel that way. And you can place evil in the hands of these mysterious aliens who are trying to bring about the end of humanity. I think it sort of makes this Greek cathartic sense of emotion.”

A lot of Revolt may seem familiar. From the start, the grittiness, color grading, and alien action brings to mind District 9, while the amnesia screams Bourne Identity and the powers feel very Marvel. But the blend of all these influences is refreshingly watchable.

While many Hollywood productions film in exotic locations and then leave as quickly as they appeared, the crew behind Revolt went out of their way to thank the communities they worked with during the film’s production. After Revolt’s release, the crew launched a crowdfunding campaign to support the small South African village that doubled for Kenya.

“It felt wrong scouting a township for our film — a piece of entertainment — while the townspeople themselves were hungry and in need,” director Joe Miale told OcchiMag. “We hired locals often, but those jobs are temporary. We wanted to leave a lasting impact, and Ward 48 provided that opportunity.”

Because of the campaign, that township now has a soup kitchen benefiting the population.

Besides its charitable background, Revolt is an underrated sci-fi story independent of any huge franchise or big-name director. It’s the kind of standalone story people complain about not seeing anymore. Sure, there may be nothing new under the sun, but this is pretty damn close.

Revolt is streaming on Netflix until September 29.