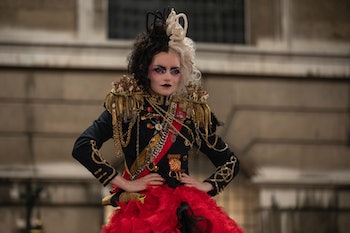 The first ten minutes of Cruella are going to break the internet. Even Disney’s classic Sleeping Beauty castle logo is revamped in black and white, signaling that this isn’t your regular Disney movie... it’s a little different. That’s confirmed when Cruella narrates her own birth, saying she’s always made a statement. Cut to an infant with a shock of two-tone black-and-white hair. These first few seconds are a microcosm of the film as a whole: unabashed, on-the-nose, but always hyper-aware of what it wants to be.

Cruella is only partly the story of Cruella, the spiteful, scheming villain seen in 101 Dalmatians.

This movie is primarily the story of Estella, first seen as a young girl ripping up and altering her boarding school uniforms. Within a fateful first 10 minutes of the movie, Estella suffers a tragic experience that, despite seeming a little ridiculous at first, sets the tone for the rest of her life.

But Estella wants to be a fashion designer instead of wasting her talents designing the trio’s disguises. So when she finally gets her big break, she decides to prove her worth without any tricks or grifts.

Enter the real villain of this villain’s origin story — the Baroness, played by Emma Thompson.

She’s Miranda Priestly by way of Maleficent, and she sees something in Estella, taking her under her wing, for better or for worse. (The Devil Wears Prada parallels don’t end there: Cruella credits its story in part to Aline Brosh McKenna, author of the 2006 fashion industry comedy.)

Cruella is the story of a young woman climbing the industry ladder and setting it on fire.

As the Baroness allows her inner evil to slip out, Estella lets more of her “Cruella” alter ego take over.

While the first act may be Devil Wears Prada, the second asks, “What if Banksy was the Joker?”

From afar, Cruella is completely ridiculous. But while watching this movie, it’s very difficult not to buy into its biggest revelations. The exaggerated comic book sensibility of its colorful 1974 London setting cushions even the sharpest plot turns. In other words, Cruella has borrowed the Marvel Cinematic Universe handbook and Made It Fashion.

There’s hardly time to question anything because the stylistic choices of Cruella are so captivatingly decadent. A black, white, and red color scheme permeates nearly every shot, and a fully loaded soundtrack fits Cruella’s ‘70s setting while aligning with the punk rock attitude it espouses.

The film’s attitude is best personified by Artie (John McCrea), a thrift shop owner and sewist recruited by Estella to create Cruella’s most ferocious looks. McCrea plays Artie with an unmistakable Bowie flair, always done up in graphic eyeliner.

McCrea has previously stated he considers his character to be queer, which is provocative both for a Disney film and one set in the past.

“He lives his life in a way that makes him happy.”

“He lives his life in a way that makes him happy,” McCrea tells Inverse. “Those people have always been around since time immemorial.”

He’s proud to play such a unique character in a particularly unique film: “I think it's the most rock and roll Disney movie we've seen,” he says. “It's huge in terms of visuals: hair, makeup, and costume.”

The soundtrack offers non-stop classic rock, with all sorts of loud, boisterous, and extravagant needle drops that suit the story as well as Cruella’s gowns. “The ‘70s is such an interesting time,” says McCrea. “The music was influencing fashion, and the fashion influenced the music. It was a circle of inspiration.”

But Cruella’s maximalism in recreating this time period can’t mask where the film falls short. While it’s a tremendous heist movie, an indulgent fashion movie, and a period piece, the film also has to be a Disney production.

So, in between the rock-’n’-soul needle drops (the soundtrack is on Spotify) and complicated robbery schemes, Estella is forced to transform into a Cruella that the audiences will recognize. (Yes, the original 101 Dalmations is set 20 years before Cruella, but that’s not important!)

As our protagonist engages in huge publicity stunts and blazes her own trail within London’s glitterati, Estella must also embark on an emotional journey, one linked to both her tragic past and how much that Cruella persona is taking over her future.

About 90 minutes in, though, the character finally unpacks her emotional baggage. It feels like the perfect ending to a truly chaotic journey — but Cruella is more than two hours long, and the 40 minutes following that moment of resolution feel like the world’s longest epilogue.

While Cruella is undoubtedly overlong, it’s difficult not to appreciate the film’s efforts to so unapologetically be something for everyone. Every actor gives it their all, from Thompson’s hissing evil as the Baroness to Hauser and Fry’s increasing exasperation as friends grappling with Estella’s new persona.

It plays fast and loose with technological anachronisms, like one of Cruella’s stunts involving a digital projector. McCrea considers that all part of the charm. “It’s set in a very specific time period but still manages just to be completely timeless,” he says.

Perhaps the biggest issue with Cruella is Cruella herself. As the entire Disney empire looms over it, this film gets trapped in the Mouse House’s shadow.

Take away the original animated series, and Cruella is just another movie about a girl whose dreams come true but who throws it all away after discovering the truth to be darker than she had imagined.

Such is the dilemma of the live-action Disney remake. Every film operating under such a mandate can try to do something different, but, in the end, these reimaginings must fit dutifully into the larger picture of the original story however shoehorned-in they may feel.

In another universe, one without such obligations to pre-existing IP, Cruella could be marketed as nothing more than the girlboss version of Joker, mixed with a little All About Eve.

It’s difficult to accurately prepare a viewer for the twists taken by Cruella’s plot. Much like Cruella herself, they’re brilliant, bad, and a little bit mad. But if the aesthetic-heavy approach of the film is successful at drawing you into Cruella’s world, you’ll follow its chaotic, frequently rug-pulling narrative.

Those twists range from the use of a rather ingenious device during the heist to a backstory revelation that’s just corny enough to remind you this is a Disney joint.

Ultimately, Cruella is the definition of “style over substance.” It’s the film equivalent of the Met Gala: a flimsy excuse to watch celebrities outdo one another in outlandish costumes, all carried off with a trendy, faux-revolutionary air. While the plot tries to keep up, it often comes off just too much for a film that’s aesthetically more than enough.

But it’s a fabulous time regardless, and well worth the price of admission (be that a movie ticket or Premier Access surcharge). If you see Cruella, buckle up: It’s a nonsensical yet glamorous rollercoaster ride.

Cruella premieres in theaters and on Disney+ with Premier Access on May 28.