“Are you watching closely?” 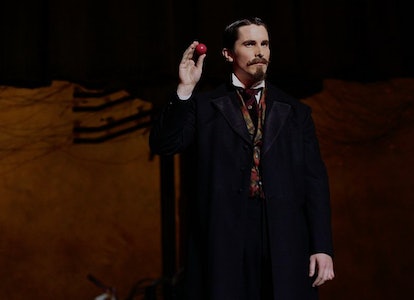 Films are magic tricks. For two hours you’re transported to different times and places in a matter of seconds. Decades of advancing technology have improved what we can do with filmmaking to the point where the magic tricks of today would look like science fiction to the directors of yesteryear.

But sci-fi looks to the future. What will the coming decades of technological breakthroughs look like? How will humanity relate to new technology? And how far are we willing to go to achieve and exploit those breakthroughs? Christopher Nolan’s 2006 film The Prestige dances with these big questions.

Set in 1890s London, The Prestige follows two rival magicians, Robert Angier (Hugh Jackman) and Alfred Borden (Christian Bale), locked in a bitter battle of illusionary one-upmanship. By exploring magic, science fiction, and technology, Nolan performs a magic trick inside a magic trick, showcasing the obsession and sacrifice it takes to make good art. It also explores the consequences of taking the next technological step simply because you can.

In order to sell the magic, Nolan once again deftly employs non-linear storytelling. His breakout hit Memento was already six years old at this point, but the technique would follow him with varied success to films like Inception and Tenet. There’s a layered mystery to The Prestige, and the unfolding of its story at the pace Nolan sets creates the very type of illusion the magicians in the film are constantly trying to perfect. At some point, you’ll be sure you know the answer to the film’s questions, and then you won’t.

Nolan also gives us a strong sense of the 1890s. As magicians push themselves to come up with the next great trick, scientists are doing what magicians can only dream of. The inclusion of historical figures like Thomas Edison and Nikola Tesla gives the film its subtle nod to science fiction and emphasizes just how close we are to achieving some of the magicians' most terrifying concepts.

Grappling with this complicated world of high stakes art and science wouldn’t work if not for the performances from Hugh Jackman, Christian Bale, Michael Caine, Scarlett Johansson, and Rebecca Hall. The nature of nonlinear storytelling means that characters’ internal lives are constantly shifting from scene to scene, and each actor does well to convey where we’re at in the timeline by implementing nuanced changes to their character’s behavior.

But most important is the sense of wonder that’s present throughout the film. As Borden and Angier gain success, the theaters that host their performances grow grander, and the collective gasps from their growing audiences echo our own.

Even knowing that it’s all a trick — the illusions performed by the magicians as well as the film itself – it’s difficult not to be drawn in by the pure presentation of it. The magic draws us in, but in the back of our head, Michael Caine’s opening question to the film still rings loud and clear: are you watching closely? The Prestige is upfront about being a trick. It’s up to you to be awed or not.

The Prestige is now streaming on Amazon Prime.