“They’re gonna come to us for salvation.” 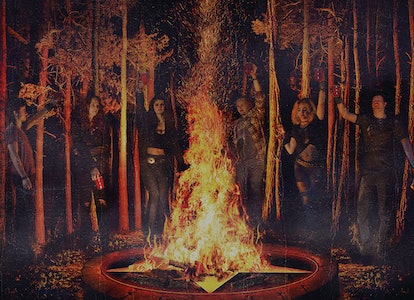 The 1980s was a decade of excess. The hair was big, the music was loud, the makeup was exuberant, and the moral fear was at an all-time high.

It was the age of televangelists and faith healers, all warning about the rise of Satan. At the same time, death metal was popular among the counterculture and Dungeons and Dragons among the youth.

However, while it seemed like satanism and the fear it conjured rose in equal parts, the era, now known as “Satanic Panic,” never saw that fervor of ritual killings materialize. That phenomenon is explained — and satirized — in this 2019 film now streaming on Netflix.

We Summon the Darkness, a 2019 film by director Marc Meyers, is the ultimate Satanic Panic movie. Beginning as a coming-of-age tale, it follows three teenage girls as they take a road trip to see a metal band, all decked out in black leather and looking to party. Ignoring the reports of a Satanic cult murder spree, they arrive at the concert, find three boys who seem to be into them, and take them home.

Any horror movie fan knows what’s going to happen next. The boys will turn out to be the Satanist murderers, leaving the girls to defend themselves and their house from the attackers. But that’s not what happens. The girls are the predators. And still, it’s not what you think.

While the three teens cover the walls with Satanic symbols and murder one of the boys, they insist they’re not a cult. In fact, that couldn’t be further from the truth. I won’t share the twist, but the truth behind the girls’ murderous actions is definitely unexpected.

This twist turns the film on its head. One by one, tropes of classic 80s slasher films are either repeated or subverted. There’s an unconventional weapon (an edger), an unexpected visitor, a visit from the cops, and, yes, a lot more violence and gore.

The cast, led by White Lotus breakout Alexandra Daddario, nails the teenage fury of the decade with an unhinged mania that resides in a person unsure of their beliefs. As anyone raised in religion will tell you, there’s a moment around the teen years when rebellion is just a way to question your own upbringing. We Summon the Darkness is an ode to that uncertainty.

So no, there’s not a typical cult in this film, per se. But there never really was a Satanic uprising in the 80s either. Instead, the cult-like followings of charismatic leaders seeped into the mainstream religions we had grown accustomed to already. Sometimes, that’s far more dangerous.

We Summon the Darkness is now streaming on Netflix.