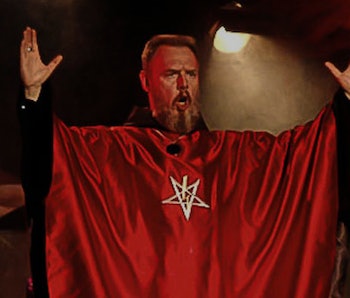 The Church of Satan gets a bad rap for, well, worshiping the symbolic character of all evil in the world. But, today is the organization’s 50th anniversary and few people really understand what makes one a Satanist. The answer is part surprisingly reasonable and part exactly what society has come to expect.

Anton Szandor LaVey founded the Church of Satan in 1966 and it’s less of a religion and more so a philosophy. It’s based in Atheism and skepticism of things that can’t be proven by science and their conception of Satan includes a list of nine statements defining him as a symbol. They include things such as taking gratification in sin and choosing vengeance over turning the other cheek.

The Church lists the nine Satanic Sins and they’re nearly all pretty reasonable things such as stupidity and pretentiousness. We all know a few people who could be more weary of those life sins.

Yet, Ashley S. Palmer, a 31-year-old Reverend in the Church of Satan, tells Vice members of the church are encouraged to believe in magic and they perform rituals. Although no animal sacrifices or drug abuse is condoned by the church, the rituals do sometimes include wishing for the death of people who have gotten away with crimes, something Palmer said he classifies as justice.

In fact the seventh of 11 Satanic Rules of the Earth written by LaVey, says members should acknowledge the power of magic and to doubt it brings consequences. The 11 rules in general are worth a read and give a good sense for the competing ideas of practicality and superstition embedded within the church’s philosophy.

Naturally, members of the church have an affinity for darkness, whether that be dark room rituals or clothing, hair and makeup. They’re also not all goth teens like culture might portray them. Palmer says he’s on the younger side of the organization and there are members that have been with the church since its formation 50 years ago.

If none of this sounds appealing to you, that’s OK, because the church doesn’t intend to push its beliefs actively on others. In fact, they are pretty secretive about the whole thing. To celebrate the 50th anniversary members are holding an event somewhere on the east coast but it’s not an open affair.

After half a century of Satanism, people aren’t flocking in droves to join up, but it’s sticking around and seems to give a group of dark-minded individuals a sense of community in a non-harmful way. Nothing wrong with that.

More like this
Culture
7 hours ago
10 years ago, Jeremy Renner ruined the best spy-thriller franchise of the century
By Adrian Manuel
Culture
8.1.2022 11:30 AM
25 years ago, the ugliest superhero movie paved the way for Deadpool, Logan, and more
By Ryan Scott
Culture
8.9.2022 10:00 AM
The Sandman: 11 characters pulled from DC comics history
By Robin Bea
Share: